Saskatchewan court weighs what to do with different Humboldt Broncos lawsuits

REGINA — A Regina judge has reserved his decision on whether to delay one of the many lawsuits filed after the deadly Humboldt Broncos bus crash.
Mar 5, 2021 3:43 PM By: Canadian Press 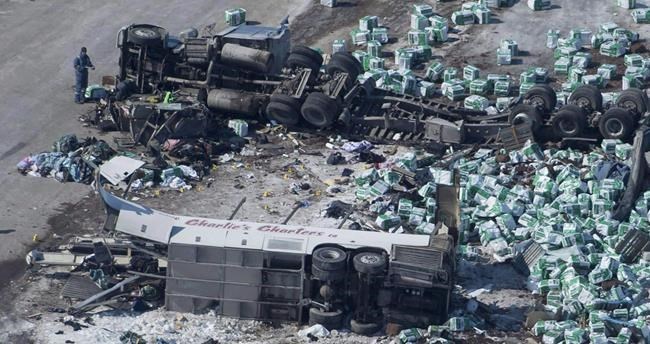 REGINA — A Regina judge has reserved his decision on whether to delay one of the many lawsuits filed after the deadly Humboldt Broncos bus crash.

Lawyers spent Friday arguing what a delay would mean for a group of grieving parents who want to move ahead with their case, and what's fair for all the victims who were on the junior hockey team's bus that day.

Sixteen people were killed and 13 were injured when, on April 6, 2018, an inexperienced truck driver went through a stop sign and into the path of the bus at a rural intersection near Tisdale, Sask.

Justice Graeme Mitchell said he's sensitive to how important the matter is. At one point during Friday's hearing, he struggled to know for certain how many individual lawsuits stemmed from the crash.

At the core of Friday's hearing was a proposed class action and whether a lawsuit brought by five other parents shortly after the crash should wait until the courts decide if the class can go ahead.

John Rice, a Vancouver lawyer working on the class action, said the representatives for nine surviving Broncos players were OK with not bringing their cases forward until after the April 2022 certification hearing.

But the lawyer for five other parents, who all lost children, said his clients don't want to wait. There's no guarantee the class-action will be certified, Kevin Mellor said, and it could be appealed, prolonging the process by several years.

He said not only would forcing a delay inflict psychological harm on the parents, they would be burdened with more legal costs. They have already spent thousands of dollars on the case getting expert reports and finding witnesses, he said.

Mellor said the last thing the families he's representing thought they would have to do is defend themselves against other families to have their day in court.

Rice acknowledged the suffering these parents have faced. But, he said court needs to consider what's fair for all Broncos victims, who would also be impacted by court delays.

Because all the lawsuits share similarities, what happens in one affects others, he argued, and the "least-worst option" is for everyone to wait until the certification hearing.

After first expressing he wanted to be delicate, Rice said: "Those that were killed won't be coming back."

"I would ask, my Lord, when you're contemplating the comparative duress of these litigants please juxtapose the duress of those who had children killed ... with the enduring, living harms — physical and psychological — of the ... surviving players," Rice said.

He also suggested the lawsuit from the five families would not be heard in the next year or so, and the delay would be temporary.

"The closure that they so deservedly want will not happen in any event before the application for certification is heard."

The class action so far includes the families of 24-year-old Dayna Brons, the team's athletic therapist from Lake Lenore, Sask., who died in hospital, and injured goalie Jacob Wassermann, 21, from Humboldt, Sask. It names as defendants the Saskatchewan government, the truck driver and the Calgary-based company that employed him.

Rice said other families have since joined, including the families of Broncos coach Darcy Haugan and bus driver Glen Doerksen. Both men were killed.

The class action is also open to families who billeted players, first responders and members of the general public traumatized by the crash scene.

"I lost my best friend on April 6, 2018," reads an affidavit filed by Adam's father, Russ Herold.

"I farmed with him. I hunted with him. I snowmobiled with him. I taught hockey to him and I coached him. My family would spend summer and winter seasons together at our family cabin as a family. Adam spent hours on the water wakeboarding.

In court filings, Mellor also said a delay could create problems because the truck driver, Jaskirat Singh Sidhu, could be deported to India after he is released from prison and before any civil trial.

In court, Rice said it's unlikely Sidhu would be deported before the end of the year and the class action also wants to hear from him.

— With files from Bill Graveland in Calgary.

This report by The Canadian Press was first published March 5, 2021