VICTORIA — A "horrible building" feared for its past as a residential school in the remote British Columbia community of Lower Post will be demolished and replaced by a cultural centre bound to become a joyful gathering place for the generations, a l
Apr 15, 2021 12:42 PM By: Canadian Press 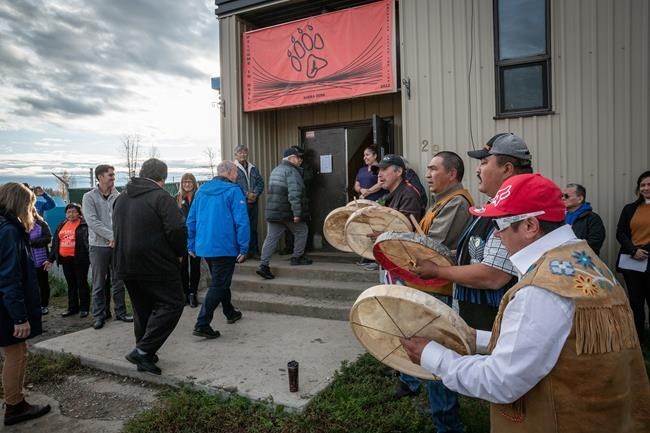 VICTORIA — A "horrible building" feared for its past as a residential school in the remote British Columbia community of Lower Post will be demolished and replaced by a cultural centre bound to become a joyful gathering place for the generations, a local leader said Thursday.

Construction is set to start in June and expected to be complete by next year.

Deputy Chief Harlan Schilling of the area's Daylu Dena Council said local leaders have been lobbying governments for almost four decades to replace the building that elders in the community fear as a place where they suffered physical and sexual abuse.

The community of about 175 residents has been forced to use the former residential school as the council's band office, post office and employment centre even though it was devastating knowing the hurt many people associated with the structure, he said.

"This means so much for the younger generations," said Schilling about the excitement surrounding the new building. "It's going to give us a chance to start that healing process."

He paid tribute to former Indigenous leaders of the northern community located near the B.C.-Yukon boundary.

"This is a success story for the people of Lower Post," said Schilling. "We finally did it. It means a lot."

Horgan said he was moved to work with the federal government to replace the building after local elders told him during a previous visit that some people were afraid to step inside the building where they suffered abuse.

"I cannot stand here much longer without coming to tears by the stories I've heard," Horgan said.

During a tour of the building in October 2019, one elder told him he was abused by school officials in the same room where the band council held its meetings. Another elder on the tour refused to come down the stairs because of past memories, said Horgan.

"Imagine me standing in the basement of this building the federal government has declared a serviceable building and him saying that this is where our administrative activities take place, and my friend is still upstairs because he can't come down the stairs," Horgan said in an interview before the announcement.

He said the new cultural centre will be transformative for the people in the northern region and will represent a place of healing and reconciliation.

"It's never too late to do the right thing," Horgan said. "It's a symbol of the representatives of the Crown, the federal and provincial governments, doing what's right. It took too long, no question the people of the community would say that."

Miller told the news conference the new community building, which will include a gymnasium, industrial kitchen, office space and meeting rooms, will be built at the former residential school site.

Residential schools represent one of the "darkest shames" of Canadian history, he said.

"I hope the new building will become a joyful gathering place," Miller said.

The former residential school that operated in Lower Post from 1951 to 1975 had more than 600 students at one point from B.C.'s north, Yukon and the Northwest Territories.

This report by The Canadian Press was first published April 15, 2021.