HALIFAX — It is Canada's most famous ship, a national icon that calls to mind the romance of the age of sail and the tenacity of those who make their living on the North Atlantic.
Mar 25, 2021 10:52 AM By: Canadian Press 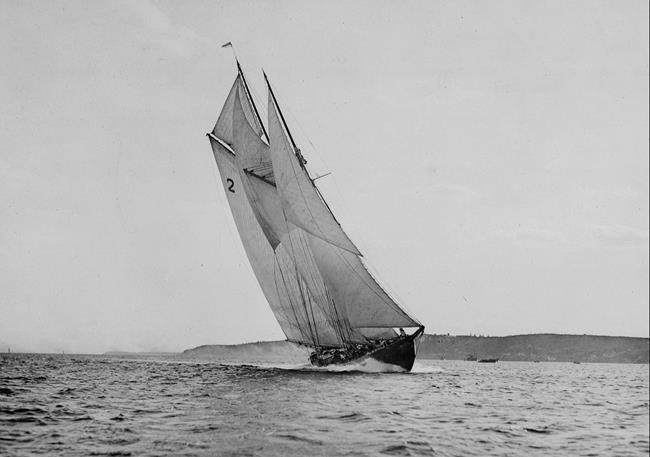 HALIFAX — It is Canada's most famous ship, a national icon that calls to mind the romance of the age of sail and the tenacity of those who make their living on the North Atlantic.

Known for its graceful lines and its crews' uncanny ability to win races, the Grand Banks fishing schooner Bluenose was launched in Lunenburg, N.S., 100 years ago this Friday.

The origins of the two-masted vessel can be traced to July 1920, when Nova Scotians were stunned to learn organizers of the America's Cup — a prestigious yacht race held off New York harbour — had postponed some races because the wind was considered too strong at 23 knots.

For those who regularly fished the shallow banks off Canada's east coast, that was considered just a stiff breeze.

"These fine, highly tuned and temperamental yachts could only perform under certain conditions," says Roger Marsters, curator of marine history at the Maritime Museum of the Atlantic in Halifax.

"By contrast, people involved in the banks fisheries were out there under the most appalling conditions, routinely ....There was a degree of professional disdain."

"The fishermen here said, 'This is ridiculous. We sail in 20 knots or 30 knots, whatever we get. Let's have a race for real sailors.'"

And so it was with a mild sense of contempt that William H. Dennis, publisher of the Halifax Herald, decided a race was needed for working fishing schooners. Aside from boosting newspaper sales, the event was created to lift people's spirits, as Canadians were still struggling in the wake of the First World War and Spanish flu pandemic.

In the fall of 1920, elimination races were held, and the winning fishing schooner, Lunenburg-based Delawana, earned the right to compete in the first International Fishermen's Cup Races.

The rules included a stipulation that competing vessels had to have fished on the banks for at least one season. The fancy yachts from New York weren't welcome.

A challenge was issued to the residents of Gloucester, Mass., a coastal community that shares a long-standing rivalry with Lunenburg's historic fishing fleet. The Americans dispatched the schooner Esperanto to compete off Halifax in October 1920.

Esperanto won two consecutive races and the big trophy was hauled back to the United States, along with $4,000 in prize money. U.S. Vice-President Calvin Coolidge described the victory as a "Triumph of Americanism!”

Stung by the loss, a business partnership was immediately formed in Halifax. Plans for a new schooner were drafted, and the keel for Bluenose was laid a few months later on Dec. 18, 1920. Construction was completed at the Smith and Rhuland shipyard in Lunenburg in just 97 days.

"That desire to win was built into the Bluenose's DNA," Marsters says.

The ship's eight sails measured more than 10,000 square feet. Its mainmast and attached topmast towered 38 metres above the deck — taller than a 10-storey building.

"With all the sails hoisted ... it's a big, powerful piece of technology, even though it's now an obsolete technology," says Marsters. "It's one that can still induce awe."

In April 1921, Bluenose set sail for its first fishing season with about 20 crew members and Captain Angus Walters of Lunenburg at the helm.

Phil Watson, captain of Lunenburg's replica Bluenose II, says the ship's self-taught designer, naval architect William James Roue of Halifax, created a swift vessel famous for hauling in some of the town's largest catches of fish, earning Walters a reputation as a "highliner."

After completing three fishing trips to the banks in September 1921, Bluenose returned to Lunenburg and won two elimination races against other Nova Scotia schooners.

Elsie, a schooner from Gloucester, was sent to Nova Scotia to compete against Bluenose for the International Fishermen's Trophy in late October.

The races attracted attention from the newspapers in New York City. There were live dispatches via telegraph, and on the streets of Halifax and Lunenburg, small models of the two ships were moved about to capture the drama on the 64-kilometre course.

Though the American ship took an early lead in two races, Bluenose came from behind both times to win the cup, crossing the finish line in Halifax harbour as a huge crowd roared.

"Captain Walters sailed home to Lunenburg with the trophy .... But work didn't stop for the skipper of the fastest fishing schooner in the North Atlantic. Bluenose exchanged racing gear for working sails .... It was business as usual for the fishermen, but the rest of the world was Bluenose-crazy."

Crowned as the "Queen of the North Atlantic," the name Bluenose started appearing on all manner of products, including skis, ginger ale, milk and underwear.

"It gave a lot of hope to a lot of people, and the country was still fairly young," says Creaser, whose group is part of the Lunenburg Marine Museum Society, owner of Bluenose II.

"This story resonated with Canadians. It's about hard work, perseverance, struggle and a success for the whole country to celebrate."

The schooner's racing history and its fishing prowess have become the stuff of legend. Under Walter's command, Bluenose won the cup again in 1922 and held the title in 1923, though the latter series was declared a draw on a technicality.

It would be another seven years before Bluenose raced in an official competition, though informal races on the fishing grounds were common.

The ship's only international series defeat was recorded in 1930, when the Boston schooner Gertrude L. Thebaud won the Lipton Cup off Gloucester.

But when it came to the International Fishermen's Cup Races series, Bluenose was never beaten. She outraced Thebaud for the trophy in 1931 and 1938, Bluenose's final race.

There are many theories as to why the ship was so fast. There's speculation it had something to do with its well-placed ballast, or its upturned bow.

Bluenose was immortalized on the Canadian dime in 1937. In all, the ship survived about a dozen fishing seasons, though it was almost wrecked off Sable Island in 1926.

"I would like to say that Bluenose was not only a racer, but she was a worker," Walters said in a letter he wrote in 1963. "She paid back every dollar that was put into her and with good interest too."

In her twilight years, Walters purchased the vessel and appealed to the Canadian and Nova Scotia governments to provide for its upkeep. But with the outbreak of the Second World War, the two governments had more pressing concerns.

Bluenose was sold to the West Indies Trading Company in 1942. Its masts were cut down, engines were added and it was used as a tramp freighter until it struck a reef and was wrecked off Haiti in 1946.