HALIFAX — Nova Scotia Premier Iain Rankin has called a provincial election for Aug. 17, saying the campaign will focus on building the economy after the province "crushed" the third wave of the COVID-19 pandemic.
Jul 17, 2021 1:57 PM By: Canadian Press 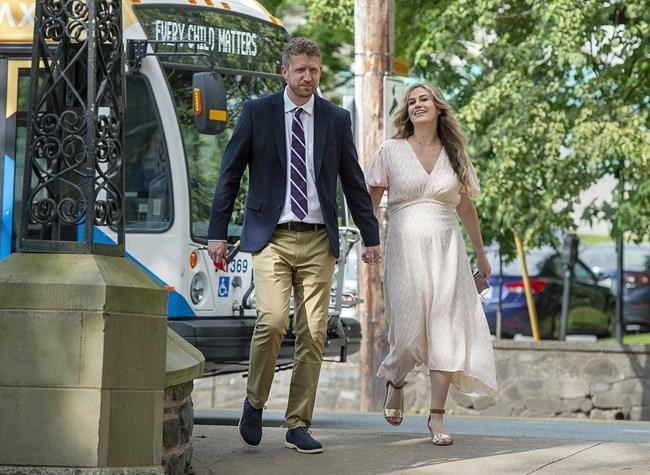 HALIFAX — Nova Scotia Premier Iain Rankin has called a provincial election for Aug. 17, saying the campaign will focus on building the economy after the province "crushed" the third wave of the COVID-19 pandemic.

"This province is at a pivotal moment, and we need to continue to make the right decisions for workers, for seniors, for families and for all Nova Scotians," Rankin said Saturday after visiting Lt.-Gov. Arthur LeBlanc to dissolve the legislature.

"This election will be about how we best position the province for a strong economic recovery, one that focuses on investments in infrastructure, in green technology and renewable energy."

Rankin, 38, is hoping to secure a third consecutive term for the Liberal party after being sworn in as premier less than five months ago, replacing Stephen McNeil.

He took office before Nova Scotia — the only province with no fixed election date — entered the third wave. In late April, as COVID-19 infections spiked in the Halifax area, Rankin imposed tough lockdown measures and closed the province's borders. As with two previous lockdowns, Nova Scotians followed the rules and case numbers dropped quickly.

"We’re at the point now where we’ve crushed the third wave," Rankin said, adding that he's confident it's safe to hold an election and he plans to campaign door-to-door. Asked why he was launching a campaign in the middle of summer when many voters' thoughts are elsewhere, he said simply, "It's time."

Also on Saturday, Progressive Conservative Leader Tim Houston launched his party's campaign, saying that "bad judgement and weak leadership" on the part of Rankin's Liberals make them ill-suited for the job of leading the province.

Like the Liberals, the Conservatives plan on bolstering the economy in the aftermath of the pandemic and Houston said he's particularly focused on using economic growth to address issues with the province's health-care system that predate the pandemic.

Moving into the campaign, Houston said he was working with a platform of solutions, not of "political promises," that will be revealed next week.

"We have the team, we're the only party with all incumbents returning and we have the most diverse slate of candidates that the party has ever had," Houston said.

NDP Leader Gary Burrill said during a rally Saturday the party plans on releasing it's full platform on Sunday and a full slate of candidates will shortly follow.

Burrill was also asked about his take on an August election and said the party has spent time readying itself for the possibility of a dissolved government.

"We have no hand in it, we have no responsibility for it. All we have been able to do is to be ready for it," said Burrill. "We have concentrated all our cognitive calories to being able to respond to their call."

The party is planning on focusing on issues affecting "real lives," Burrill said, and remains critical of Rankin's plan to cut $209 million from the budget as it could affect health-care spending.

A survey of 1,200 adult voters in May suggested Nova Scotians were impressed with how Rankin handled his first real challenge as Liberal premier, which he stickhandled with the help of Dr. Robert Strang, the province's popular chief medical officer of health. The poll, released June 3 by Narrative Research, placed the Liberals well ahead in voter support.

With a margin of error of plus or minus 2.8 percentage points, the survey found that 52 per cent of decided voters said they would vote for the Liberals. The Progressive Conservatives trailed at 24 per cent, the NDP were at 19 per cent and the Green party had five per cent.

Every provincial or territorial government in Canada that has sought re-election since the onset of the pandemic in March 2020 has won. That includes governments in New Brunswick, British Columbia, Saskatchewan, Newfoundland and Labrador and Yukon.

Despite their lead in the polls, the Nova Scotia Liberals are facing some challenges, not the least of which is the fact that many members of the Liberal caucus have chosen not to run for re-election, including seven former cabinet ministers and the former premier, McNeil.

As well, Rankin was put on the defensive earlier this month after he revealed that as a young man he had been convicted of drunk driving in 2003, and was charged again in 2005, though he was cleared in the latter case.

In the days that followed, the premier apologized for the poor choices he made in his 20s, saying he regretted that alcohol was once "a big part" of his life. "I was very, very sorry to have been in a place in my life a long time ago where I made mistakes," Rankin said Saturday, adding that Nova Scotians he meets are more interested in talking about the future.

Houston acknowledged he believes the Liberals will benefit from launching a campaign as the province emerges from a tough lockdown.

"Iain has called the election because he thinks it suits him," he said Saturday. "Nova Scotians will decide whether it's appropriate."

Houston, a 51-year-old chartered accountant who has led the Tories since October 2018, has argued the province should focus on getting the population fully vaccinated rather than electioneering. This will be Houston's first election as leader.

His party has taken a tough line on the drunk driving issue, repeatedly saying Rankin misled Nova Scotians by downplaying the 2005 incident, which resulted in an impaired driving conviction that was later overturned on appeal.

Meanwhile, Burrill, a 65-year-old United Church minister who has led the party since February 2016, is contesting his second election as leader.

The Liberals entered the fifth year of their current mandate in May and have been reduced to a minority in the legislature following resignations of members. At dissolution they held 24 of the 51 seats, followed by the Progressive Conservatives led by Houston with 17, the New Democrats under Burrill with five. There were three Independents and two vacancies.

The campaign will feature races in 55 ridings because the province decided last year to revive four "protected" seats in districts where the government wants to increase the participation and representation of Acadians and African-Nova Scotians.

This report by The Canadian Press was first published July 17, 2021.