WOLSELEY, Sask. — A province mourned the loss of a slain RCMP officer on Sunday, remembering the Mountie as a compassionate fixture of his rural Saskatchewan community. Const.
Jun 13, 2021 10:46 PM By: Canadian Press 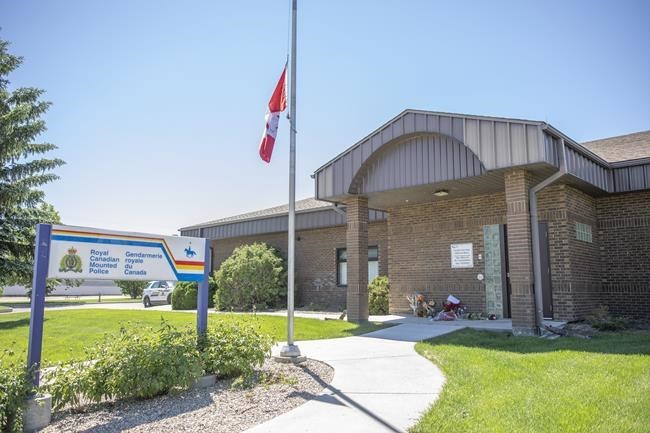 WOLSELEY, Sask. — A province mourned the loss of a slain RCMP officer on Sunday, remembering the Mountie as a compassionate fixture of his rural Saskatchewan community.

Const. Shelby Patton, 26, died Saturday morning after he stopped a suspected stolen truck in the small town of Wolseley, Sask., east of Regina. He was hit by the truck while outside of his police vehicle, RCMP said.

The truck took off and Patton died at the scene.

Two hours later a man and a woman were arrested in a field outside the small town of Francis, Sask.

In a release issued late Sunday night RCMP said 41-year-old Alphonse Stanley Traverse and 42-year-old Marlene Velma Louise Pagee, both from Winnipeg, have been charged with manslaughter as well as a number of other offences.

The two remain in custody and are scheduled to appear at the Regina Provincial Court on Monday at 9:30 a.m. local time.

The other charges they face include failure to stop after an accident resulting in death, theft of a motor vehicle, possession of stolen property over $5,000 and breach of undertaking. Pagee is also charged with possession of a controlled substance.

Meanwhile, flags at RCMP stations across Saskatchewan have been lowered to half-mast, while a growing memorial of flowers, notes and stuffed animals has taken shape outside the Indian Head detachment where Patton was posted.

Those who knew him said he was tailor-made for the Mounties.

"It's a fine line between being a kind person and being authoritative and in control, which sounds bad, but I mean that in a nice way," said Brennan Risling, a drama teacher at Patton's high school in Yorkton, Sask.

The young Patton wanted to be backstage, so Risling made him the stage manager for a play.

"He was organized. He knew when people had to be on stage and he knew what they had to do. But he was also kind in a way that wouldn't make people feel bad, which in drama might seem like a small thing, but it's not," his former teacher said.

He also praised Patton's backstage ingenuity, recalling the time the student was tasked with reproducing the sound of a 1930s-era car. Patton solved the problem by rigging up an old fan inside a bucket.

"What I appreciated was how original he could be," Risling said. "... He was able to think outside the box and use what we had in the school to make it feel effective."

Risling left the school in Patton's hometown in 2013 and hadn't heard that his former student had joined the Mounties.

"Finding out he was an RCMP officer makes a lot of sense," he said, adding his heart broke when he heard Patton was dead. "He was a great person."

Patton was similarly liked and respected by those who knew him in adulthood.

Gillian Solomon, who works at the Ace Hardware store across the street from the Indian Head RCMP detachment, said Patton was a regular customer.

"He was really nice," she said. "An awful lot of the time, you run into RCMP officers in their private lives and they’re cautious, (but) he was a really pleasant, nice guy."

In his six years of service in Indian Head, Solomon said Patton touched many lives in town. She described him as compassionate and caring, and said he will be missed.

"A lot of people are really devastated by what happened to him, whether they knew him or not," she said. "And of course, there’s the fact that he was just too freaking young."

In Wolseley, Varinder Ghotra, who works at the town's lone hotel, said he heard the building's alarm go off around 8 a.m. on Saturday. The doors were still locked when he checked them, so he reset the alarm and went back to sleep.

Only later would he learn that Patton had died on the street in front of the hotel at around that time, and the people in the truck that struck him had driven away.

Fredrick Runs, a hotel guest, saw an RCMP patrol vehicle parked at the end of the street just across from the railway tracks that morning. He believes it must have belonged to Patton.

"Things like this don't happen in little towns," he said.

A Facebook post from Kaela Patton said she doesn't know what to do now that her brave big brother is gone.

"I'm so proud of how brave you were, you were a darn good officer and an even better brother," the post read.

RCMP said Patton had been a Mountie for six years and four months, almost all of which he spent at Indian Head. He was briefly assigned to Parliament Hill in 2015.

Saskatchewan RCMP Assistant Commissioner Rhonda Blackmore has said Patton was known as a hard-working, dedicated police officer and his colleagues have been traumatized by his death.

She said it's a close-knit team with a "family-like environment," and there will be supports in place to help them through their grief.

Messages of support have poured in from politicians, including Saskatchewan Premier Scott Moe.

"Our grief is only matched by our tremendous gratitude to Constable Patton for his service, and to every police officer who serves and protects us every day," he tweeted on Saturday night. "My deepest condolences to Constable Patton’s wife, family, friends and colleagues."

In the release police issued Sunday night they said Patton’s family had informed Saskatchewan RCMP that a fraudulent Go-Fund-Me page had been created in the fallen officer's name.

They said they have advised Go-Fund-Me that the account is fraudulent, and asked people not to give money "to this account in the name of Sam Joseph or promote this account’s activities."

Back at the memorial outside the Indian Head detachment, a poster in what appeared to be a child's handwriting had a message of comfort for the officer’s family

— With files from Rob Drinkwater in Edmonton and Nicole Thompson in Toronto.

This report by The Canadian Press was first published June 13, 2021.