Mourning London attack victims, "Canada's Got Talent" returns: In The News for June 9

In The News is a roundup of stories from The Canadian Press designed to kickstart your day. Here is what's on the radar of our editors for the morning of June 9 ... What we are watching in Canada ...
Jun 9, 2021 1:15 AM By: Canadian Press 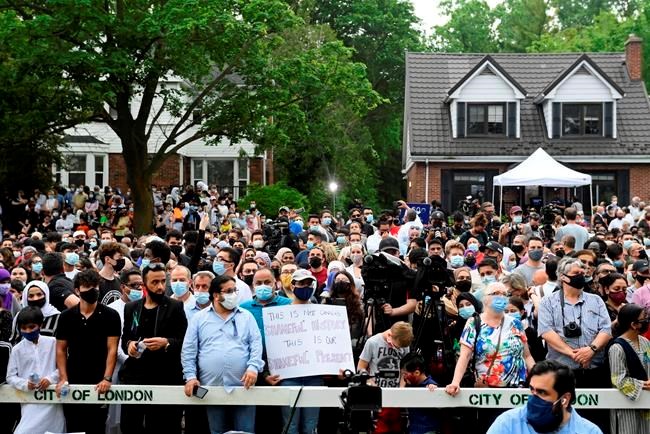 In The News is a roundup of stories from The Canadian Press designed to kickstart your day. Here is what's on the radar of our editors for the morning of June 9 ...

Flags are flying at half-mast on Ontario government buildings this morning in honour of five members of a Muslim family who were run down in what police describe as an intentional act of hate.

Four of the family members -- representing three generations -- have died, while a nine-year-old boy remains in hospital following the Sunday evening attack in London, Ont.

Relatives have identified the deceased as 46-year-old Salman Afzaal, his 44-year-old wife Madiha Salman, their 15-year-old daughter Yumna Salman and her 74-year-old grandmother, who was not immediately named.

The couple's son, Fayez, was seriously wounded but is expected to recover.

Nathaniel (Nate) Veltman, 20, of London is charged with four counts of first-degree murder and one of attempted murder.

Residents showed up in droves to grieve the family and support Fayez on Tuesday evening, flooding the street outside the London Muslim Mosque.

Among those at the vigil was 14-year-old Hateem Amin, who has been a close friend of Yumna's since they were just nine years old.

She described Yumna as the kind of friend everyone wants to have.

"She would just compliment you and she would notice your insecurities and purposely direct the compliments at that," Amin said. "She was so thoughtful."

Another of Yumna's friends, Safiyah Lawendy, 14, said she hopes the alleged attack serves as a wake-up call for people who don't believe Islamophobia is real or present in Canada.

"We always thought London was a safe place," Lawendy said. "And I think that none of us ever imagined something like this could occur in London. But I think it's very much an eye-opener, that these hate crimes are real and we have to take action against them."

The senior officer responsible for human resources in the Canadian Armed Forces says the military’s repeated failure to address sexual misconduct in the ranks over the years has led to what feels like an “existential threat” to the institution.

Lt.-Gen. Steve Whelan tells The Canadian Press that is what makes the current crisis different from past iterations — and is why the military needs to keep its promises this time around.

Whelan will have a personal hand in that effort as the head of military personnel command, which has oversight over everything from recruitment and training to promotions and health care.

Whelan says he has already started working with the new chief of military culture, Lt.-Gen. Jennie Carignan, to identify ways in which the Armed Forces can address the various not only sexual misconduct but also hate in the ranks.

Whelan himself came into his current job after the former head of military personnel command, Vice-Admiral Haydn Edmundson, stepped aside in March after being accused of sexual assault.

Edmundson has denied the allegations.

For months, President Joe Biden has laid out goals for taming the COVID-19 pandemic and then exceeded his own benchmarks, but the U.S. is on pace to fall short of his aim to have 70 per cent of Americans at least partially vaccinated by July 4.

The White House has launched a month-long blitz to combat vaccine hesitancy and a lack of urgency to get shots, particularly in the South and Midwest. But it is increasingly resigned to missing the president’s vaccination target. The administration insists that even if the goal isn’t reached, it will have little effect on the overall U.S. recovery from the virus.

About 15.5 million unvaccinated adults need to receive at least one dose in the next four weeks for Biden to meet his goal. But the pace of new vaccinations in the U.S. has dropped below 400,000 people per day — down from a high of nearly two million per day two months ago.

Dr. Anthony Fauci, the nation’s top infectious disease expert, told reporters at a briefing on Tuesday that he still hopes the goal will be met "and if we don’t, we’re going to continue to keep pushing."

So far 14 states have reached 70 per cent coverage among adults, with about a dozen more on pace to reach the milestone by July 4. But the state-to-state variation is stark.

Fauci said the administration is "pleading" with states, particularly those with low vaccination rates, to step up their efforts in the coming months, though some of the states trailing behind are hardly sharing the urgency.

On a conference call Tuesday, White House COVID-19 coordinator Jeff Zients delivered an impassioned call for governors to join the administration in "pulling out all the stops" on vaccinations this month.

In Mississippi, which trails the nation with only about 34 per cent of its population vaccinated, Republican Gov. Tate Reeves has called Biden’s goal "arbitrary, to say the least." The vaccination rate in the state has dropped off so sharply that it would take the better part of a year for the state to reach the 70 per cent target.

PARIS — French President Emmanuel Macron denounced "violence" and "stupidity" after he was slapped in the face Tuesday by a man during a visit to a small town in southeastern France, which prompted a wide show of support for the head of state from politicians across the ideological spectrum.

Macron was greeting the public waiting for him behind barriers in the town of Tain-l’Hermitage after he visited a high school.

Two videos show a man slapping Macron in the face and his bodyguards pushing the assaulter away as the French leader is quickly rushed from the scene.

"I'm always going to meet people," Macron told reporters on Tuesday evening, as he was greeting a crowd in the nearby city of Valence, accompanied this time by his wife, Brigitte Macron.

"Some people express anger, sometimes disarray ... that's legitimate anger, and we will continue to respond. Stupidity and violence, no, not in democracy."

A few hours earlier, Macron had taken another 25-minute walk in the narrow streets of the city, posing for selfies with a small crowd and chatting with many people in a laid-back atmosphere.

Valence prosecutor Alex Perrin said in a statement that police have detained the man who slapped Macron and another man who was accompanying him. They are both 28 and live in the region. Their motives aren't known at this stage, he said.

Speaking at the National Assembly, the lower house of the French parliament, Prime Minister Jean Castex said "through the head of state, that’s democracy that has been targeted." Lawmakers from across the political spectrum got to their feet and applauded loudly in a show of support.

A 20-year-old Irish soldier won the only Victoria Cross awarded for an act of valour on Canadian soil. Private Timothy O'Hea saved 800 German immigrants locked in converted boxcars on a train stopped at Danville, Que. All by himself, O'Hea put out a fire in another boxcar filled with ammunition before it exploded.

"Canada's Got Talent" is returning to Citytv with the involvement of franchise creator Simon Cowell.

Rogers Sports & Media has announced a revival of the homegrown version of the popular "Got Talent" franchise, which originally aired in 2012.

The reality competition is part of Citytv's newly announced 2021-22 lineup and begins production this fall in Niagara Falls, Ont., with the premiere set for next spring.

Hayden Mindell, vice-president of programming at Citytv, says Cowell will appear in this incarnation but "to what extent is still to be determined." They hope to announce details on who will host and judge the nine episodes soon, he said.

Other homegrown programming in the fall-winter lineup includes "Bachelor in Paradise Canada," "The Bachelor After Show" and a fourth season of the Canadian cop-canine story "Hudson & Rex."

"Bachelor in Paradise Canada" airs this fall followed by the after show, which will be hosted by Toronto radio hosts Deepa Prashad and Daryn Jones of KiSS 92.5 and will cover all "Bachelor" franchises airing throughout the year on Citytv.

FORT MCMURRAY, Alta.— A gender reveal party that led to a wildfire in Alberta has resulted in a $600 fine being issued.

Travis Fairweather, a wildfire information officer, says the party on May 31 just west of Fort McMurray involved an exploding target of blue or pink powder, which started a fire that grew to about half the size of a Canadian Football League field.

Fairweather says written permission is always required in Alberta to use fireworks or an exploding target.

"Fireworks and exploding targets — they can be fun, but they can also come with a hefty price tag if you end up inadvertently starting a wildfire."

He says a person could also be charged with the cost of fighting the blaze.

Alberta legislation was amended in 2017 to allow for fines and the requirement for written approval.

It's the third wildfire caused by an exploding target this season, but Fairweather says not all were necessarily gender reveal parties.

This report by The Canadian Press was first published June 9, 2021