LONDON, Ont. — The man accused of deliberately mowing down and killing four members of a Muslim family in London, Ont., demanded a cab driver call police to arrest him minutes after the attack, the head of a local taxi company said Wednesday.
Jun 9, 2021 3:09 PM By: Canadian Press 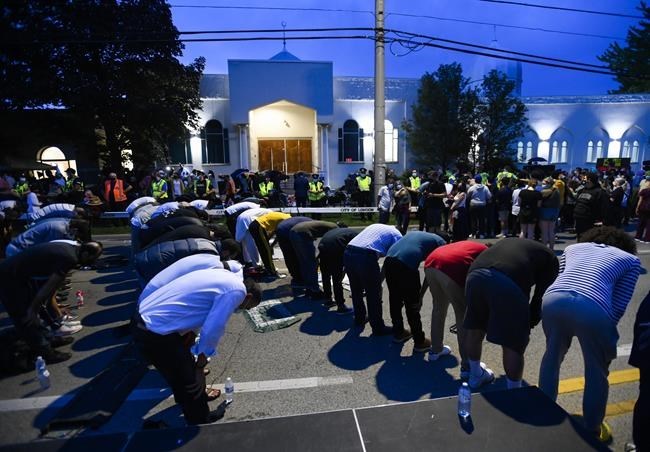 LONDON, Ont. — The man accused of deliberately mowing down and killing four members of a Muslim family in London, Ont., demanded a cab driver call police to arrest him minutes after the attack, the head of a local taxi company said Wednesday.

Hasan Savehilaghi, president of Yellow London Taxi, said one the company's drivers was having a cigarette and a coffee next to his car in an empty strip mall parking lot on Sunday night when a black pickup truck came screeching to a halt directly behind his vehicle.

The man in the truck launched into a profanity-laced tirade directed at the taxi driver, said Savehilaghi, speaking on behalf of his employee, who he said was badly shaken by what happened.

"He yelled at our colleague to call police because he had killed somebody," Savehilaghi said.

It was then that the cab driver noticed heavy damage to the front of the pickup truck, as well as the presence of a lot of blood, Savehilaghi said. The cab driver called 911 and, while on the line with the dispatcher, noticed a police car going by, Savehilaghi recounted.

The taxi driver immediately sprinted after the officer and told her what he had heard from the man in the truck, the company president said. The officer and a few others came over to the truck and took the man out of the vehicle, he said.

The man who was in the pickup truck wore a military helmet and what appeared to be an armoured vest, Savehilaghi said his employee recounted. Once police removed those items, the taxi driver "noticed swastika signs on the chest of (the man's) T-shirt," his employer said.

"He was laughing the entire time and he was chanting something," and asked the taxi driver to record the arrest and "make a movie of him," Savehilaghi said.

Four of the family members who were struck — representing three generations — have died, while a nine-year-old boy remains in hospital.

Relatives and others who knew them have identified the deceased as 46-year-old Salman Afzaal, his 44-year-old wife Madiha Salman, their 15-year-old daughter Yumna Salman and her 74-year-old grandmother, Talat Afzaal. The couple's son, Fayez, was seriously wounded but is expected to recover.

Nathaniel (Nate) Veltman, 20, of London is charged with four counts of first-degree murder and one of attempted murder.

The taxi driver who alerted police is also Muslim, Savehilaghi said, and is currently resting at home.

"I am proud of him, he kept calm and he was super smart to flag the police down while on the phone with 911," Savehilaghi said. "He didn’t panic and he did the right thing every step."

Neighbours of the family were among the many struggling to come to grips with the loss in the wake of the attack.

"I actually spoke to Salman and his son 24 hours before it happened," said Craig Tilford, who lives down the street from the family.

"My friend and I are very extroverted, and Salman is not. He saw my friend and I were in a conversation, so we greeted each other. To my friend in Urdu, and me in English."

While Tilford wasn't very close with the family, he said he understood they had deep connections with others in the neighbourhood.

When another family moved from Pakistan, Salman and his family welcomed them to the neighbourhood and helped them get settled. "They would feed each other," he said.

Tilford said he hopes people grappling with the incident are able to lean on their neighbours, rather than turning inwards.

At the site of the crash, a torrential rain Wednesday afternoon washed away the remaining tread marks on the sidewalk, and messages of love and support that mourners had written in chalk overtop of them.

Piles of flowers, cards and teddy bears, waterlogged by the downpour, continued to grow throughout the day as community members stopped by to pay their respects.

Meanwhile, flags were flying at half-mast on Ontario government buildings Wednesday in honour of the victims, a day after a vigil saw droves of residents gather outside the London Muslim Mosque to grieve those killed and support the lone survivor.

Among those at the vigil was 14-year-old Hateem Amin, who has been a close friend of Yumna's since they were just nine years old. She described Yumna as the kind of friend everyone wants to have.

"She would just compliment you and she would notice your insecurities and purposely direct the compliments at that," Amin said. "She was so thoughtful."

She said the two had just gotten the first dose of their COVID-19 vaccines, and were looking forward to when they could safely get together again.

"She was telling me she's so excited for Grade 10, to make more memories," Amin said. "Her mom bought us matching clothes from our home country, Pakistan. We were going to match, but we never were able to do that. And that's something that really hurts me to think about."

Amin said she's still grappling with what it means that her friend's life was cut short.

"It was not a normal death. People die when they get old. They live life, and that's when they pass on, when it's time for them to go. It was not time for her to go," Amin said.

Another of Yumna's friends, Safiyah Lawendy, 14, said she hopes the alleged attack serves as a wake-up call for people who don't believe Islamophobia is real or present in Canada.

Senior officer who golfed with Vance has power over military police investigations
Jun 13, 2021 10:42 AM