Loosening COVID restrictions, Trudeau leaves for G7 summit: In The News for June 10

In The News is a roundup of stories from The Canadian Press designed to kickstart your day. Here is what's on the radar of our editors for the morning of June 10 ... What we are watching in Canada ...
Jun 10, 2021 1:15 AM By: Canadian Press 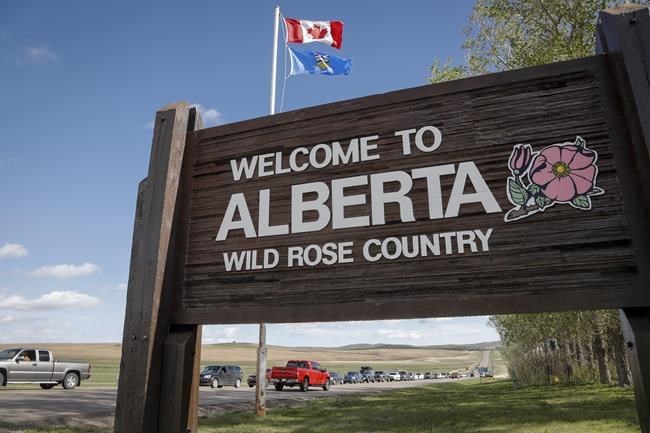 In The News is a roundup of stories from The Canadian Press designed to kickstart your day. Here is what's on the radar of our editors for the morning of June 10 ...

Alberta is entering the second step of its reopening plan, which includes allowing up to 20 people at outdoor gatherings, weddings and funeral services, but still bans indoor gatherings.

Gyms and fitness studios can open today, and restaurants can have a maximum of six people at a table, indoors or on a patio.

Entertainment venues, including movie theatres, casinos and museums, are being allowed to reopen at one-third capacity.

Masking and distancing requirements are still in place.

Meanwhile, Manitoba will also be slightly loosening public health orders Saturday to allow for outdoor gatherings, but restrictions on businesses will remain in place.

Dr. Brent Roussin, the chief provincial public health officer, has said that Manitoba is not able to open everything at once given the ongoing demands on the health-care system.

The Manitoba government will be laying out the province's reopening plans today as health officials say hospital capacity remains strained by a high number of COVID-19 patients.

Premier Brian Pallister has previously indicated that the plans could be linked to vaccination rates, similar to those in Saskatchewan and Alberta.

In Ontario, the province's top doctor will be presenting new pandemic modelling today.

Those numbers will come as Ontario prepares to enter the first step of its reopening plan on Friday, which will allow limited retail shopping and patio dining.

New COVID-19 infections and hospitalizations have dropped in recent weeks and the province is moving ahead with the first step of its reopening plan a few days early.

More restrictions will loosen after 21 days if pandemic indicators improve and more people get vaccinated.

Despite positive trends, officials say they're monitoring the spread of a more infectious virus variant.

Prime Minister Justin Trudeau is leaving Canada for the first time in more than a year to meet with other G-7 leaders to discuss the global recovery from COVID-19.

He is set to arrive in the United Kingdom for the three-day summit and then travel to Brussels to meet with NATO allies.

Despite the pandemic and vaccines dominating his international agenda, back at home Canada has been seized by the recent killing of a Muslim family in London, Ontario.

Before that, Canada was mourning the discovery from a First Nation in British Columbia of what are believed to be the remains of 215 Indigenous children at a former residential school.

This weekend's summit also marks the first time U-S President Joe Biden will travel abroad since entering the White House, providing a chance for him and Trudeau to finally meet face-to-face.

Trudeau's office says besides the pandemic, he will also focus on tackling climate change and promoting gender equality.

The prime minister leaves Canada having been vaccinated with one of his two shots.

MILDENHALL, England — President Joe Biden has opened his first overseas trip of his term with a declaration that “the United States is back.”

He is seeking to reassert the nation on the world stage and steady European allies deeply shaken by his predecessor.

Biden has set the stakes for his eight-day trip in sweeping terms, believing the West must publicly demonstrate it can compete economically with China as the world emerges from the coronavirus pandemic.

The president’s first stop was a visit with U.S. troops and their families at Royal Air Force Mildenhall, where he laid out his mission for the trip.

“We’re going to make it clear that the United States is back and democracies are standing together to tackle the toughest challenges and issues that matter the most to our future," he said. "That we’re committed to leading with strength, defending our values, and delivering for our people.”

The challenges awaiting Biden overseas were clear as the president and the audience wore masks — a reminder of the pandemic that is still raging around much of the world even as its threat recedes within the United States.

The president first attends a summit of the Group of Seven leaders in the U.K., which includes Prime Minister Justin Trudeau, and then visits Brussels for a NATO summit and a meeting with the heads of the European Union. The trip comes at a moment when Europeans have diminished expectations for what they can expect of U.S. leadership on the foreign stage.

PORT-AU-PRINCE, Haiti — Haiti has long perplexed experts with seemingly low infection and death rates from COVID-19 despite its rickety public health system, a total lack of vaccines and a widespread disdain for safety measures.

That's no longer the case.

The few Haitian hospitals treating COVID-19 cases report turning away patients. Official figures remain relatively low for a nation of more than 11 million people: Just 2,271 cases and 62 deaths recorded over the past month.

But experts are united in saying those figures miss the true scale of what they say is the largest spike in cases since the new coronavirus first landed.

The government declared a health emergency on May 24 and imposed a curfew and safety measures — though few Haitians appear to be following them. Most shun, or can't afford, face masks and it's nearly impossible to keep a distance while shopping in bustling marketplaces or riding the crowded, colourful buses known as tap taps that most Haitians rely on to get around.

“There is no time to waste,” said Carissa Etienne, director of the Pan American Health Organization, which is working with the government to scale up testing to identify and isolate infected people — a difficult task in a place where few think they can afford to be sick.

So far, Haiti hasn't received a single vaccine, though officials say they expect to get 130,000 AstraZeneca doses this month.

The U.S. government also said it would donate a portion of six million doses for Haiti, though officials haven't specified how many or when they will arrive.

Some 756,000 doses of AstraZeneca shots had been slated to arrive in May via the United Nations’ COVAX program for low-income countries, but they were delayed due to the government’s concern over possible clotting as a side-effect and a lack of infrastructure to keep the vaccines properly refrigerated.

TORONTO — After a dearth of programming from last year's pandemic production delays, Corus Entertainment has announced a lineup that executives say is "flush with shows," including "Big Brother Canada" as it returns for a 10th season.

During a virtual presentation of the media company's 2021-22 lineup Wednesday, host and executive producer Arisa Cox announced the hit reality series has once again been greenlit for Global.

Troy Reeb, executive vice-president of broadcast networks at Corus Entertainment, said it feels like "the sun has risen again" on the schedule after a difficult year.

"This time last year, we had great unpredictability about what we were going to put into the fall schedule," said Reeb.

"We were searching the world and acquiring international content because traditional sources of Hollywood-produced content had temporarily dried up."

Last year's fall schedule didn't include Global's three biggest shows — "Survivor," "9-1-1" and "New Amsterdam" — but this year they're all back, Reeb said. Other blockbuster U.S. titles in the lineup include franchise expansions "CSI: Vegas," "NCIS: Hawai'i" and "FBI: International."

Comedies include the haunted-house series "Ghosts," which is based on a U.K. series and stars Rose McIver and Utkarsh Ambudkar.

New Canadian shows headed to Global include the previously announced "Family Law," which starts airing later this year. The one-hour legal drama is shot and set in Vancouver and stars Jewel Staite, Victor Garber, Zach Smadu, Genelle Williams and Lauren Holly in a story about a dysfunctional family's law firm.

Ottawa's plan to end quarantine hotel stays for some returning travellers is a big step for the travel industry, but air industry associations say more changes are necessary for a full rebound to take shape.

Starting in early July, the federal government says citizens and permanent residents returning from abroad will no longer have to undergo a quarantine if they have been fully vaccinated with the approved vaccines in Canada and test negative for COVID-19.

Fully vaccinated travellers will also no longer have to spend three days in a hotel quarantine, but the government said the plan depends on COVID-19 levels continuing to decrease in the country.

Allison Wallace, a spokeswoman for the travel agency Flight Centre, said quarantine measures — particularly the hotel quarantine program — had been the only thing holding back many travellers from booking new trips.

"With it being removed at some point in the very near future, we fully expect to see a lot more people travelling soon," Wallace said.

The National Airlines Council of Canada, which represents the country's largest airlines, said the change falls short of expectations for a full travel restart plan.

“Unlike many other countries including all other G7 nations, the federal government has yet to provide a clear restart plan outlining when and how major travel and border restrictions will be removed," said Mike McNaney, President and CEO of NACC, in a statement.

"As vaccination programs increase rapidly and jurisdictions around the world provide consumers and industry with a clear path forward, we must do the same."

This report by The Canadian Press was first published June 10, 2021