Interprovincial travel and a dire situation in India: In The News for April 27

In The News is a roundup of stories from The Canadian Press designed to kickstart your day. Here is what's on the radar of our editors for the morning of April 27 ... What we are watching in Canada ...
Apr 27, 2021 1:09 AM By: Canadian Press 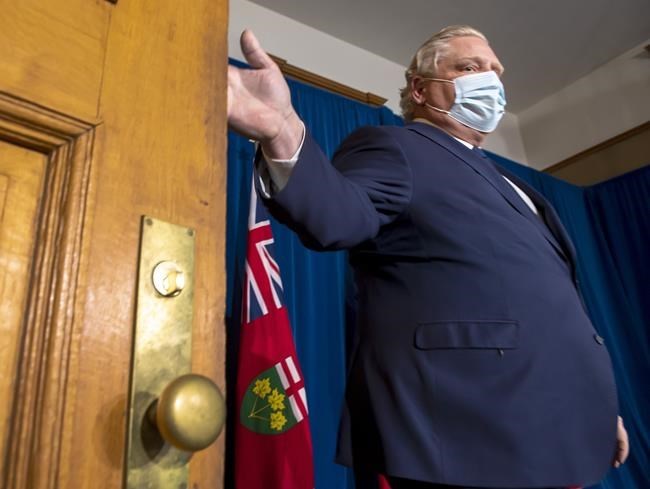 In The News is a roundup of stories from The Canadian Press designed to kickstart your day. Here is what's on the radar of our editors for the morning of April 27 ...

TORONTO — The Ontario government is asking Ottawa for enhanced measures for interprovincial travellers as the province grapples with skyrocketing hospitalizations and cases of COVID-19 variants.

In a letter Monday to the federal ministers of health and public safety, Ontario says it has already closed its boundaries with Quebec and Manitoba to non-essential travel, but there are no measures in place to protect provinces from the spread of COVID-19 variants through interprovincial air travel, an area of federal responsibility.

The province is asking for mandatory pre-departure PCR testing for all domestic air travellers entering Ontario, an extension to current rules for international passengers seeking entry into Canada.

The letter, which was shared with The Canadian Press, says there have been 17 domestic flights in the past two weeks to Toronto's Person International Airport with possible COVID-19 exposures.

It adds there have also been potential exposures on flights landing at other Ontario airports, including Ottawa and Hamilton.

The letter comes as health-care workers from Newfoundland and Labrador are set to arrive in Ontario today, as well as three teams of nurses and medical technicians from the Canadian Armed Forces.

The survey by Leger and the Association for Canadian Studies shows 84 per cent of Canadian respondents reported being satisfied with the court decision.

Leger executive vice-president Christian Bourque says Canadians seem to be optimistic that the verdict will have a positive impact on how policing is done is Canada.

Bourque says more than half of the respondents say the verdict will create a change of the culture within police forces.

The online poll of 1,548 adult Canadians was conducted April 23rd to 25th, and the survey cannot be assigned a margin of error because web polls are not considered random samples.

WASHINGTON — U.S. President Joe Biden spent his first 100 days in office encouraging Americans to mask up and stay home to slow the spread of COVID-19, but the task for the next 100 days will be to lay out the path back to normal.

When he entered office, Biden moved swiftly to overcome vaccine supply issues and more than tripled the country’s ability to administer them. But ending the pandemic, the central challenge of his presidency, will require more than putting shots into arms — a task now growing more difficult as demand sags — but also a robust plan to help the nation emerge from a year of isolation, disruption and confusion.

If Biden launched the nation onto a war footing against a virus that infected nearly 200,000 Americans in January and killed about 3,000 of them per day, the next months will be tantamount to winning the peace. Already, deaths are down to fewer than 700 per day and average daily cases are below 60,000.

U.S. officials insist there is a long way to go before the country can be fully at ease, but the progress is marked.

Going forward, success will mean finishing the nation’s herculean vaccination campaign — to date 43 per cent of Americans have received at least one shot — overcoming lagging demand and communicating in clear terms what activities can be safely resumed by those who are vaccinated. Key milestones include Biden's July Fourth pledge that Americans can safely gather with friends and family, and the start of the new school year, when the president hopes to have all schools open safely.

The Centers for Disease Control and Prevention is expected to unveil new guidance on outdoor mask-wearing for unvaccinated individuals today, ahead of a planned speech by Biden later in the day on the state of the pandemic response.

NEW DELHI — India recorded more than 320,000 new cases of COVID-19 infection today as a grim surge of illness and death weighed on the country and its sinking health system started getting much-needed support from foreign nations.

Today’s 323,144 new infections raised India’s total past 17.6 million, behind only the United States. It ended a five-day streak of recording the largest single-day increases in any country throughout the pandemic, but the decline likely reflects lower weekend testing rather than reduced spread of the virus.

The health ministry also reported another 2,771 deaths in the past 24 hours, with roughly 115 Indians succumbing to the disease every hour. The latest fatalities pushed India’s fatalities to 197,894, behind the U.S., Brazil and Mexico. Experts say even these figures are probably an undercount.

Other nations such as the U.S., Germany, Israel and Pakistan have also promised medical aid. The countries have said they will supply oxygen, diagnostic tests, treatments, ventilators and protective gear to help India at the time of crisis, which World Health Organization’s chief Tedros Adhanom Ghebreyesus called “beyond heartbreaking.”

France was sending breathing machines, ICU gear and eight oxygen generators in a shipment expected to be sent later this week. Each generator can equip a hospital of 250 beds for several years, French President Emmanuel Macron’s office said.

In Canada, opposition leaders Erin O'Toole and Jagmeet Singh haved called on the Trudeau government to send aid to India to help deal with the surge.

Procurement Minister Anita Anand said Friday that Canada will "stand ready" to help useful items, but no plan has been announced yet.

Prince Edward Island changed to driving on the right-hand side of the road.

Radio personality Gord Atkinson, who exposed the world to a young Paul Anka and rubbed elbows with Elvis Presley on his popular "Campus Corner" show, has died at 94.

Even from his earliest days, the Toronto-born and raised Atkinson seemed to have entertainment in his blood.

He got his start in the late 1940s as a Canadian publicist for Decca Records, the U.K. label that was home to Bing Crosby’s “White Christmas,” before making a break for local radio.

But it was a move to the nation’s capital in 1954, where he took a gig at CFRA-AM, that offered Atkinson the opportunity to really make a splash as the host of “Campus Corner,” a two-hour weekend show that focused on youth entertainment.

"Campus Corner" gave a platform to rising Canadian stars and trumpeted some of America’s biggest musical acts too.

Over the years, Atkinson became friendly with Presley, Frank Sinatra and Ottawa-born impressionist Rich Little, long before his stints on "The Tonight Show Starring Johnny Carson" and in Las Vegas.

He interviewed George Burns, Jimmy Stewart and Julie Andrews, to name only a few.

OTTAWA --Taking a screenshot of a naked Liberal MP during virtual parliamentary proceedings was an affront to the authority and dignity of the House of Commons, Speaker Anthony Rota ruled Monday.

Rota sternly reminded MPs that it is "strictly forbidden" to take a photograph of Common proceedings, whether in-person or virtual and regardless of whether the proceedings are beamed to the public.

With that, the Speaker said he considers the procedural aspect of the incident to be "closed."

But Liberals are not letting the matter drop. They are taking it to the all-party board of internal economy, the governing body of the Commons. If the board does not agree to impose sanctions on the Bloc Québécois MP who has admitted taking the photo, the Liberals are threatening to take it to the police.

Rota was responding to an incident on April 14 when Liberal MP William Amos inadvertently appeared naked on an internal parliamentary feed of that day's question period. His image was not seen on the public feed.

Amos has said he was changing his clothes after a jog and did not realize that his laptop camera was turned on.

Bloc Québécois MP Sebastien Lemire last week apologized for taking the screenshot of Amos. He said he had no idea how the photo quickly made its way to the media and ended up circulating online around the globe.

This report by The Canadian Press was first published April 27, 2021