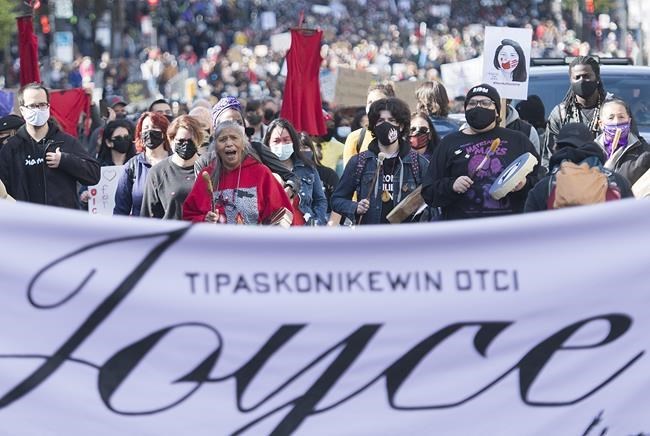 They testified during the last week of the coroner's inquest investigating the death of Echaquan, a 37-year-old Atikamekw mother of seven, who filmed herself on Facebook Live as a nurse and an orderly were heard making derogatory comments toward her shortly before her death last September at a hospital northeast of Montreal.

Paul-Émile Ottawa, chief of the Conseil des Atikamekw de Manawan, said her passing has left an open wound in the community, located about 250 kilometres north of Montreal. Ottawa told coroner Géhane Kamel that Echaquan's death exacerbated the fears of a people already reluctant to seek care at Quebec hospitals.

"On some level, we all feel guilty for being unable to act so that Joyce could be saved," Ottawa said. "It was a huge trauma for everyone, even today … the fear that it'll happen again."

He said people in the community of 3,000 were panicked and stunned by the video, which depicted a dying woman being mistreated by health-care workers at the hospital in Joliette, Que., located about 75 kilometres northeast of Montreal. Echaquan's daughter had also filmed her mother at the hospital shortly before she died.

"Never again do I want to see images like those that still haunt me today — no more videos like Joyce broadcast in a bid to save herself, no more videos of a daughter filming her mother dead and powerless," Ottawa said.

His recommendations include having doctors and other health-care staff trained in school on the realities of the country's Indigenous Peoples, simplifying the hospital complaints process, recognizing systemic racism and adopting Joyce's Principle.

Joyce's Principle is a series of measures drafted by the Atikamekw community to ensure equitable access to health care for Indigenous patients. The document describes Quebec's health system as being imbued with systemic racism.

Among the numerous recommendations in Joyce’s Principle are that the federal government revise its financing model for health and social services regarding Indigenous groups and that Quebec hire an ombudsperson for Indigenous health.

Premier François Legault and his government have refused to accept the full document because of its mention of systemic racism, which they deny exists in Quebec.

Constant Awashish, grand chief of the Conseil de la Nation Atikamekw, told the inquiry Tuesday that the government's refusal to adopt Joyce's Principle is a "perfect example of systemic racism." Awashish invited Legault to reflect carefully on the issue.

"Joyce's Principle are solutions that we brought, we are the ones who live with discrimination, with systemic racism, we are the ones bringing simple solutions, we want it to be done by us, not by others for us," Awashish testified. "If we're able to apply it, things will get better, for us and for society … because everyone will feel safer."

Earlier on Tuesday, Maryse Poupart, the new head of the regional health authority that governs the Joliette hospital, told the inquiry that certain policies have been implemented to make Indigenous patients more comfortable. Poupart, who has only been on the job for two months, said the hospital has set in motion cultural sensitivity training for workers and hired more Indigenous staff.

She said she has also met several times with Chief Ottawa, something her predecessor said he hadn't done. Poupart addressed Echaquan's family, apologizing and assuring them she was ready to change the culture at the hospital.

The last person to make recommendations to the coroner was Echaquan's husband, Carol Dubé, who read statements on behalf of his eldest daughter, Marie-Wasianna Echaquan Dubé, and Echaquan's mother, Diane Dubé, before addressing the inquiry himself.

He said he'll never forget Echaquan's cries on the video, adding that it was difficult at times to remain calm while listening to testimony during the inquiry, knowing how his wife was treated. Dubé said she paid the ultimate price for systemic racism.

He offered several recommendations, which echoed those of the experts: governments should adopt Joyce's Principle, recognize systemic racism and do more to mend bridges with the community.

"We want to do everything our power so that no other family goes through what we went through," Dubé said.

Dubé listed off his children by name and said his wife's story is one of nightmares and lies. "How do I explain to my children the way Mom left us?" Dubé asked. "And you who are listening to me, would you agree to tell this story to your child?"

Lawyers for the various parties are to deliver their final representations Wednesday. A march dubbed "Justice for Joyce" is planned for Wednesday afternoon in Trois-Rivières, Que., where the hearings have been held.

This report by The Canadian Press was first published June 1, 2021.