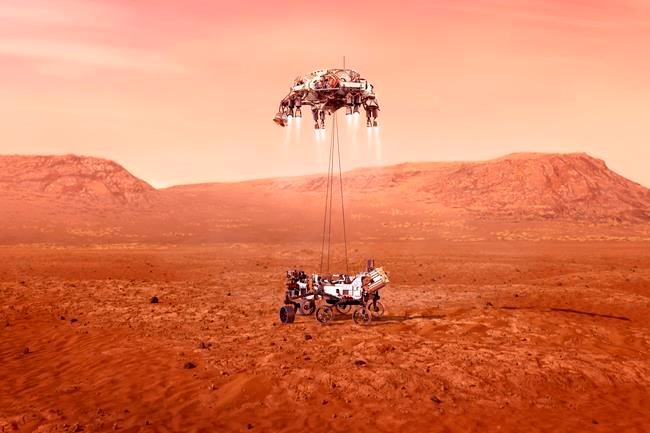 The University of Alberta planetary geologist, one of a select team of scientists working on the Perseverance project, says he felt every tick.

"It's hard to describe," he said Thursday.

"There were so many steps in those seven minutes of terror. Step after step, it was, 'OK, it's gone well. It's gone well.' And then the applause.

"We went from zipping through space to being gently on the ground and everything worked flawlessly.

Ground controllers at NASA's Jet Propulsion Laboratory in Pasadena, Calif., jumped to their feet, thrust their arms in the air and cheered in triumph and relief on receiving confirmation that the six-wheeled Perseverance had touched down.

The car-sized, plutonium-powered vehicle landed at Jezero Crater, a small and tricky target with a strip of ancient river delta full of pits, cliffs and fields of rock.

The landing marks the third visit to Mars in just over a week. Two spacecraft from the United Arab Emirates and China swung into orbit around Mars on successive days last week. All three missions lifted off in July to take advantage of the close alignment of Earth and Mars. They journeyed some 300 million miles in nearly seven months.

Perseverance, the biggest, most advanced rover ever sent out by NASA, became the ninth spacecraft since the 1970s to successfully land on Mars.

Over the next two years, the probe — nicknamed Percy — will use its two-metre arm to drill down and collect rock samples that might contain signs of bygone microscopic life. Three to four dozen chalk-sized samples will be sealed in tubes and set aside to be retrieved by a fetch rover and brought homeward by another rocket ship.

Percy has 23 cameras to record everything about the landscape. It also has ground-penetrating radar and an on-board laser that can vaporize rocks and analyze their makeup. It will be able to detect organic matter in the rocks and reveal evidence of environments that could have been habitable.

Scientists believe that if life ever flourished on Mars, it would have happened three billion to four billion years ago when water still flowed on the planet.

Perseverance has already sent a grainy, black-and-white photo of the planet's pockmarked surface, the rover's shadow visible in the frame.

Herd's job, together with his colleagues, will be to monitor the rover and tell it when to sample. That work won't begin for weeks as other pieces of equipment, including a robotic helicopter, are tested and put through their paces.

He watched the landing on TV, linked in online with several of his colleagues.

"It was just awesome to see everybody cheer when we were down on the ground."

Celebrations, though, were muted.

Herd said scientists were already planning to meet Thursday night to discuss their next moves. Perseverance landed so accurately, he said, that they know exactly where it is.

"We have a starting point now. We can start to say, 'We're in this particular area that was mapped out. What are our priorities? Where are we going next?'

"It's going to be an incredible period of exploration on Mars."

This report by The Canadian Press was first published Feb. 18, 2021