How Canadians spent the holidays and ambiguous COVID rules: In The News for Jan. 5

In The News is a roundup of stories from The Canadian Press designed to kickstart your day. Here is what's on the radar of our editors for the morning of Jan. 5 ... What we are watching in Canada ...
Jan 5, 2021 1:52 AM By: Canadian Press 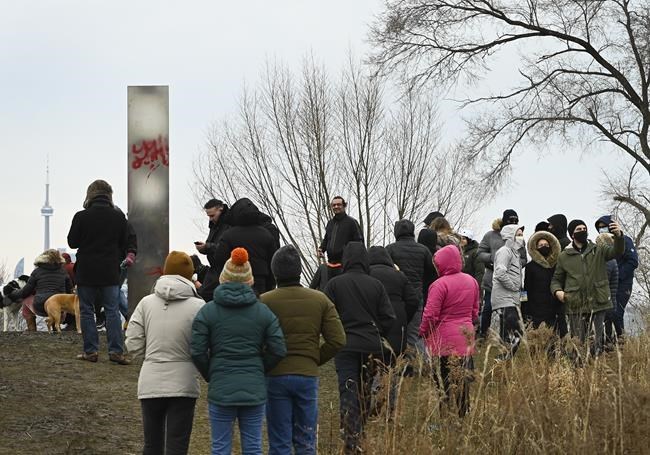 In The News is a roundup of stories from The Canadian Press designed to kickstart your day. Here is what's on the radar of our editors for the morning of Jan. 5 ...

OTTAWA — A new survey suggests nearly half of Canadians visited with family or friends over the winter holiday period.

The poll by Léger and the Association for Canadian Studies poll found 48 per cent of those surveyed visited with people outside their home, compared to 50 per cent who did not.

Public health officials had pleaded with Canadians to sharply limit their contacts during the holidays to avoid massive spikes in COVID-19 transmission.

Case numbers are rising and the poll suggests 62 per cent of those surveyed have little or no confidence that we'll limit the spread of COVID-19 over the next few weeks.

CALGARY — A group representing independent travel agents in Canada says the federal government has thrown their industry into a "tailspin" with new rules requiring a COVID-19 test before Canadians are allowed back into the country from international travel.

The Association of Canadian Independent Travel Advisors (ACITA) says in a statement the timing of Transport Minister Marc Garneau's announcement last Thursday — New Year's Eve — could not have been worse because many agents had closed their offices for the holiday long weekend.

It says customers who had planned international travel during the holidays were not given sufficient opportunity to cancel or adjust their trips.

Calgary travel agent Janez Law, whose agency specializes in arranging travel to Asia, says a client in the Philippines is planning a six-hour bus trip to the capital, Manila, to get the required test to ensure she is allowed back into Canada when she returns on Thursday.

The ACITA statement says most clients are willing to accept an additional cost related to travel during the pandemic, but fear they could face "being gouged" to get the required testing.

The association was started last spring in part to lobby for government assistance for the industry due to challenges of the pandemic.

ATLANTA — Georgia voters are set to decide the balance of power in Congress in a pair of high-stakes Senate runoff elections.

Today's voting will help determine president-elect Joe Biden’s capacity to enact what may be the most progressive governing agenda in generations.

Democrats must win both of the state’s elections to gain the Senate majority.

But some fear that outgoing President Donald Trump’s brazen attempts to undermine the integrity of the nation’s voting systems may scare away Georgia voters.

Over the weekend, reports surfaced of a telephone call Trump made to the Georgia secretary of state.

The call highlighted how Trump has used the Georgia campaign to make clear his continued hold on Republican politics.

LONDON — British Prime Minister Boris Johnson has announced a new national lockdown for England until at least mid-February to combat a fast-spreading new variant of COVID-19, even as Britain ramped up its vaccination program by becoming the first nation to start using the shot developed by Oxford University and drugmaker AstraZeneca.

Johnson said people must stay at home again, as they were ordered to do so in the first wave of the pandemic in March, this time because the new virus variant was spreading in a "frustrating and alarming” way.

From today, primary and secondary schools will be closed for face-to-face learning except for the children of key workers and vulnerable pupils. University students will not be returning until at least mid-February.

People are told to work from home unless it's impossible to do so, and leave home only for essential trips. All nonessential shops and personal care services such as hairdressers will be closed, and restaurants can only operate takeout services.

An ice storm began that devastated Quebec and eastern Ontario. It was caused by a moisture-laden front from the Gulf of Mexico stalling over Arctic air on the ground and lasted until Jan. 10. A state of emergency was declared after the ice downed power lines, forcing 100,000 people out of their homes. Millions were left without power, sometimes for weeks. The storm caused more than two dozen deaths and over $1 billion in insurance claims.

Telefilm Canada says an investigation into allegations made against one of its employees has "concluded that no harassment, discrimination or misconduct had occurred, pursuant to applicable law."

The federal agency announced the investigation by a third-party firm in July, after allegations surfaced on social media about the conduct of Dan Lyon, who was Telefilm's regional feature film executive for Ontario and Nunavut.

Telefilm now confirms to The Canadian Press that the subject of the investigation was Lyon and that he is no longer one of its employees, noting he left at the end of 2020.

The Crown corporation also said it has "put into place an improved, streamlined complaints procedure, and has adjusted internal practices in the Project Financing team to ensure more equitable and transparent decision-making."

Lyon told The Canadian Press he could not comment on the investigation but did say his departure at Telefilm comes amid an illness in his family that requires his attention for a few months.

A British Columbia Supreme Court judge says the province's public health orders on COVID-19 are inconsistent and ambiguous in ruling on a dispute between former spouses on the custody of their children.

In his judgment dated Dec. 22, Kent rules in favour of the father continuing to have shared parental responsibility after the mother withheld his regular parenting time with the children over the public health orders.

She believed that the time the father spends with his new partner breaches the orders and poses a risk to her children.

The decision says following the couple's separation in 2019, the father became polyamorous and began seeing a woman after meeting her and her husband through a support group.

Court heard no one involved in the relationship is dating anyone else and they do not plan on introducing new partners while the health restrictions are in place.

Kent interprets the restrictions to mean a co-parent in the father's situation is permitted to include his new partner in his core bubble.

This report by The Canadian Press was first published Jan. 5, 2021

Gretzky memorabilia among items from museum in Niagara Falls, Ont., up for auction
Jan 26, 2021 10:43 AM
Comments