Holiday lockdown supported and Moroccans protest Israel ties: In The News for Dec. 15

In The News is a roundup of stories from The Canadian Press designed to kickstart your day. Here is what's on the radar of our editors for the morning of Dec. 15 ... What we are watching in Canada ...
Dec 15, 2020 1:15 AM By: Canadian Press 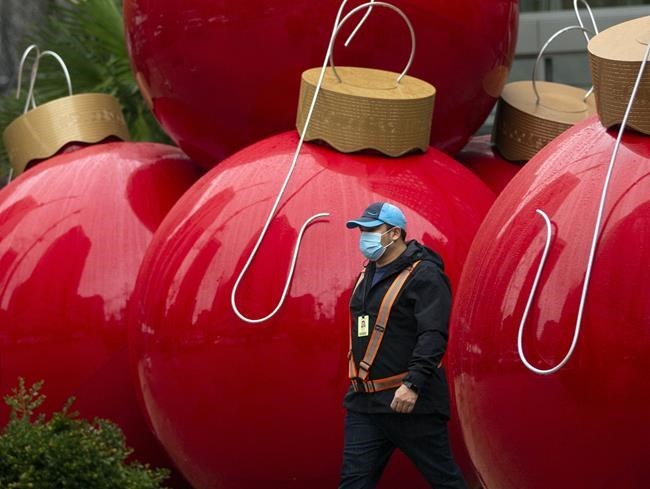 In The News is a roundup of stories from The Canadian Press designed to kickstart your day. Here is what's on the radar of our editors for the morning of Dec. 15 ...

The chief medical adviser at Health Canada says things are on track for her department to approve a second vaccine for COVID-19 very soon.

Dr. Supriya Sharma says things "look positive" for the vaccine from U.S. biotech firm Moderna but there are still some outstanding manufacturing documents needed before the decision can be made.

Health care workers in Toronto and long-term care residents in Montreal and Quebec City were the first to receive the vaccine Monday morning.

Long-term care workers from an Ottawa care home will be next, as that city rolls out its vaccination program this morning.

A new poll suggests a majority of Canadians support the idea of a lockdown on non-essential businesses and services during the holidays to fight a surge in new COVID-19 cases across the country.

Sixty-five per cent of respondents in the poll conducted by Léger and the Association for Canadian Studies said they supported a general lockdown in their province during Christmas and New Year’s to tackle the pandemic versus 29 per cent who opposed the idea.

Léger executive vice-president Christian Bourque expressed surprise at the seemingly strong support, which was largely the same no matter the respondent’s age or where in Canada they lived.

“I expected it to be a 50-50 type thing because we're already under some pretty severe restrictions as it is,” Bourque said. “With the holidays coming up, Canadians are basically saying: ‘Buckle up. There's a few weeks left.’ "

To that end, 51 per cent respondents believed the worst of the pandemic is currently upon the country while 29 per cent felt it is yet to come. Only 10 per cent felt the worst had past and a similar number did not know.

Those numbers perhaps reflect the continuing surge in cases, including in parts of the country that were previously almost untouched. They also coincide with new modelling from the Public Health Agency of Canada suggesting the country could top 575,000 cases and nearly 15,000 deaths by Christmas.

President-elect Joe Biden pointedly criticized President Donald Trump on Monday for threatening core principles of democracy even as he told Americans that their form of self-government ultimately “prevailed.”

Speaking from his longtime home of Wilmington, Delaware, on the day that electors nationwide cast votes affirming his victory, Biden was blunt in critiquing the damage done by Trump's baseless allegations that the contest was stolen. Such arguments have been roundly rejected by judges across the political spectrum, including the justices at the Supreme Court.

Democracy, Biden said, has been “pushed, tested, threatened.” But he said it proved to be “resilient, true, and strong.”

“The flame of democracy was lit in this nation a long time ago,” Biden said. “And we now know that nothing, not even a pandemic or an abuse of power, can extinguish that flame.”

Biden and his team hope that the formal victory in the Electoral College combined with his record-setting 81 million-vote count will help the country unify and accept his presidency. But the challenge facing Biden was evident as many congressional Republicans, including some of the party's top leaders, refused to officially accept Biden's win. Trump, meanwhile, shows no sign of conceding.

The president-elect acknowledged an irony in the circumstances, noting that he won with the same number of electoral votes — 306 — as Trump did four years ago. Trump hailed that win as a “landslide.”

“By his own standards, these numbers represent a clear victory then, and I respectfully suggest they do so now,” Biden said.

A candidate needs to win 270 electoral votes to clinch the presidency.

Moroccan authorities on Monday dispersed a group of activists who tried to hold a protest outside the parliament building in the capital to denounce the country's recent decision to establish diplomatic relations with Israel.

Dozens of police officers in riot gear were mobilized to push protesters away from parliament in Rabat. Demonstrators wanted to show solidarity with Palestinians and reject the normalization of ties between Rabat and Tel Aviv.

Sion Assidon, a Moroccan Jew and a human rights activist, told reporters while being escorted away by authorities that “whoever expresses disagreement must put duct tape on their mouths.”

Abdessamad Fathi, president of the Moroccan Instance for the Support of Ummah Affairs, a group affiliated with the outlawed Al Adl Wal Ihsane movement, said on Facebook that authorities' decision to ban sit-in is an indication that normalizing relations with Israel is “imposed on Moroccans."

On Sunday, Moroccan authorities allowed a large gathering outside the Parliament building to support the recent deal that also included U.S. recognition of Morocco’s claim over the long-disputed Western Sahara region.

Another large rally was organized on Sunday in the city of Laayoune in Western Sahara, where thousands of Moroccans had chanted slogans in support of the agreement.

The royal palace in Rabat said in a statement that king Mohammed VI had promised President Donald Trump he would facilitate direct flights to transport Jews of Moroccan origin and Israeli tourists to and from Morocco and re-open the liaison offices. The announcement was cheered by political parties and provoked despair among Islamist groups.

The House of Commons voted 163-78 to adopt the red and white maple leaf design as Canada's flag.

Mirvish Productions says it's aiming to welcome back subscribers to the theatre by fall of next year.

Founder David Mirvish says the Toronto theatre company is working toward launching its new main subscription season in September 2021 after the pandemic shut down the stage last spring.

Mirvish says the planned restart date is based on guidance from medical experts about when it will be safe to resume performances as Canada prepares to roll out COVID-19 vaccines this week.

Mirvish says subscribers will have the chance to see an additional show on top of the six they already paid for as a gesture of gratitude for their patience as the health crisis put indoor live performance on hold.

He says Mirvish Productions is still working to pin down its playbill, including previously announced shows and at least a couple of blockbuster surprises.

Last May, Mirvish Productions sent an email to subscribers saying the company expects "Hamilton" to return to Toronto after the much-hyped musical's run was cut short by the COVID-19 lockdown.---

While some families don't want pandemic reminders to cloud Christmas within their own homes, others are finding whimsical ways to incorporate COVID-related elements into their rituals.

Valeria Melia felt a tug on her heartstrings when her daughter asked if the pandemic would force Santa Claus to cancel his visit to their Toronto home this year.

Seven-year-old Michela and her four-year-old brother Massimo had seen other holiday events nixed over the last nine months, and their mother wanted to make sure they knew Christmas was still on the table.

So Melia turned to her computer, typing up a letter from Santa that would ensure her children he was safe and on his way.

"I wanted to tell them Santa's been given the all-clear to fly, saying 'don't worry, I'm still coming,'" Melia says.

"Even before Christmas, (Michela) would say things like: 'I can't wait until this virus is over so I can go hug my friends again.' So when she asked about Christmas, it was heartbreaking."

Dr. Todd Cunningham, a child psychology expert at the University of Toronto, says adding pandemic themes to our merry festivities can be helpful by reinforcing messages kids have been hearing for months.

"We've talked often about ways of keeping ourselves safe," he says. "So it would make sense to them in terms of our current context to (incorporate) those things."

This report by The Canadian Press was first published Dec. 15, 2020.