From hockey arenas to Montreal's Olympic Stadium, sites across Canada that are usually dedicated to sports, business or entertainment are being repurposed to serve the goal of mass vaccination.
Feb 24, 2021 12:35 PM By: Canadian Press 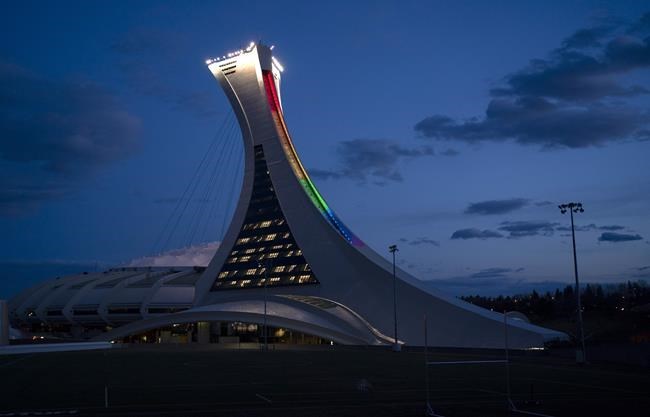 From hockey arenas to Montreal's Olympic Stadium, sites across Canada that are usually dedicated to sports, business or entertainment are being repurposed to serve the goal of mass vaccination.

As provinces prepare to expand their vaccine rollouts to the general population in the coming days and weeks, here's a look at some notable landmarks that have been named as mass vaccination sites.

Built for the 1976 Olympics, Montreal's towering "Big O" has previously hosted the Expos baseball team and major sporting events such as the CONCACAF Champions League soccer final. It's known for holding major events, such as a concert by the Rolling Stones and a mass by Pope John Paul II, as well as for costly and embarrassing falling concrete and roof tears.

In mid-February, the local health authority announced the atrium of the stadium would be repurposed as a mass vaccination clinic. Quebec is set to start vaccinating people 85 and older there next week.

The theme park bills itself as "the country’s premier amusement park," featuring more than 200 attractions, including a 20-acre water park and 17 roller-coasters. The Yukon Striker, it boasts, is the world's fastest, longest and tallest dive coaster.

Now, the site is also being eyed as a drive-thru vaccine clinic in the spring, according to public health officials.

The City of Toronto is also preparing a number of mass vaccination sites, including the Metro Toronto Convention Centre, Toronto Congress Centre and the Cloverdale Mall.

Retired Gen. Rick Hillier, the head of the province's vaccine distribution task force, said Wednesday there would be enough sites to allow Ontarians to get the vaccine close to where they live.

The Keystone Centre is home to the Brandon Wheat Kings junior hockey team and the Brandon Curling Club, as well as the as the Royal Manitoba Winter Fair and special events, such as a now-postponed ZZ Top concert.

In addition to the Keystone Centre, the province has announced other mass vaccination sites including the Thompson Regional Community Centre and the RBC Convention Centre in Winnipeg.

The venue at Cape Breton University was originally built for the 1987 Canada Winter Games. It is now listed as a recreational facility on the website of the Cape Breton Regional Municipality. The university announced in 2019 that some 500 solar panels would be installed on the roof of the complex in what it called the largest solar installation on Cape Breton Island.

Other vaccine clinics in Nova Scotia include the IWK Health Centre, a major hospital in Halifax, and the New Minas Baptist Church.

The government of British Columbia has not yet released the locations of its clinics but says they will take place in large spaces including school gymnasiums, arenas, convention halls, and community halls.

In Nunavut, upcoming vaccination clinics are to be run out of schools and community halls.

The government of Alberta has chosen not to publish the locations of its vaccine sites in order to try to avoid having people show up without appointments, according to a spokesman for Alberta Health Services.

This report by The Canadian Press was first published Feb. 24, 2021.