OTTAWA — A groundbreaking new report details how countries such as Saudi Arabia, China and Rwanda are meddling in democratic countries, including Canada, to harass, threaten and commit violence against their citizens living abroad.
Feb 4, 2021 1:00 AM By: Canadian Press 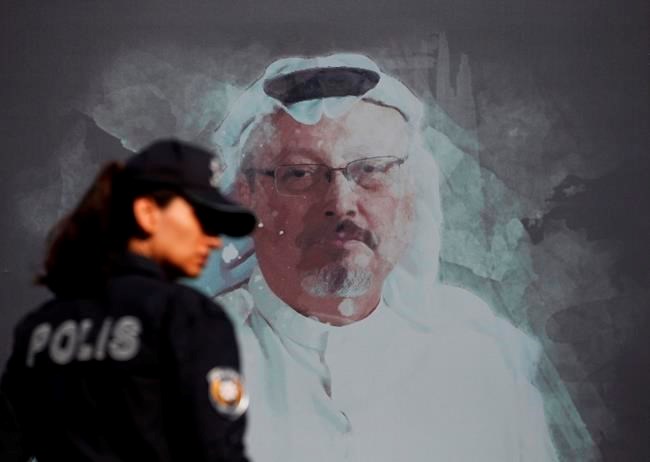 OTTAWA — A groundbreaking new report details how countries such as Saudi Arabia, China and Rwanda are meddling in democratic countries, including Canada, to harass, threaten and commit violence against their citizens living abroad.

The report by Freedom House on "transnational repression" is believed to be the first broad attempt to provide a global overview the threat of foreign interference by hostile regimes.

The American-based organization says a worldwide pattern of violence and intimidation meant to squelch dissent can be seen in a study of 31 countries targeting hundreds of victims in 79 other states, and it names six countries that are undermining democracy: China, Rwanda, Saudi Arabia, Iran, Russia, and Canada's NATO ally Turkey.

The report indicates how anecdotal accounts of foreign harassment in various Canadian diaspora communities are part of a worldwide pattern.

It says 3.5 million people globally have been attacked directly or through "secondary tactics of intimidation and coercion" that then sends ripples through diaspora communities around the world.

Freedom House president Michael J. Abramowitz said the report underscores dangers faced by human-rights activists, dissidents, and their families even after they have fled their repressive countries.

"Exiles around the world describe surveillance, assault, or even kidnapping and assassination as a constant threat that limits their ability to speak freely. Stopping transnational repression is vital to protecting democracy and rolling back authoritarian influence," said Abramowitz.

The report cites the 2018 murder of Washington Post journalist Jamal Khashoggi by the Saudi Arabian government in its Istanbul consulate as the most brazen and high-profile example.

Khashoggi, who lived in the United States, was a frequent critic of the Saudi regime. He was beaten to death and dismembered and his body parts were dissolved in acid.

But the report says there are countless other examples that don't garner the headlines of the Khashoggi murder. And some of them have occurred in Canada.

In August 2020, former Saudi intelligence officer Saad al-Jabri, who lives in Canada, filed a lawsuit against Saudi Crown Prince Mohammed bin Salman and others for threatening to kill him and detain his family members to force him back to Saudi Arabia, the report says.

"In his lawsuit, al-Jabri alleges that a group of Saudi nationals stopped at the Canadian border were carrying the equipment needed to dismember a corpse. Al-Jabri's allegations represent a familiar pattern of escalatory targeting, involving multiple means of repression against a single person," it says.

The report dovetails with previous accounts of Chinese nationals living in Canada who have complained of harassment by Chinese government agents.

The problem has been documented in the special House of Commons committee on Canada-China relations, which has also heard about the intimidation of ethnic Muslim Uighurs, whose relatives in China's Xingjian province have been rounded up into internment camps and subjected to forced labour and rape.

Freedom House makes clear that some Uighurs who have sought sanctuary in Canada have not found it, and cites one example:

"The family of a Uighur woman in Canada is put in a labour camp in China; when they are released, they call and warn their exiled daughter to keep quiet as a Chinese official looks on."

The report notes that Tibetans in the United States and Canada have been subjected to "intimidation and espionage by Chinese agents," including by a New York City police officer of Tibetan descent who was arrested in September 2020 for working with Chinese officials to spy on the Tibetan community.

"The case resembles recent incidents of surveillance and intimidation of Tibetans in Sweden, Switzerland, and Canada. The same top-shelf spyware used against Uighurs has also been used in campaigns against Tibetans, said the report.

The Chinese intimidation extends beyond the government to a network of proxy entities called "anti-cult" associations, including Chinese student groups in Canada. The proxies have taken part in harassment and physical attacks against Communist party critics and members of religious ethnic minorities, the report states.

"The greater distance from official Chinese government agencies offers the regime plausible deniability on the one hand, while accomplishing the goal of sowing fear and encouraging self-censorship far from China’s shores on the other," the report says.

The report also shines a light on the reach of Rwandan President Paul Kagame, who for 2 1/2 decades has won elections by margins of well over 90 per cent, and who goes to great lengths to silence his political critics.

"Rwandans as far-flung as the United States, Canada, and Australia report intense fears of surveillance and retribution. The cases documented by Freedom House represent a small fraction of alleged incidents, but provide a useful window into the extent and methods of the Rwandan government's campaign."

Freedom House cited a 2014 report by the Immigration and Refugee Board of Canada that describes the harassment of Rwandan nationals in Canada.

The report also singled out Kagame's decades-long pursuit of his most vocal political critic, Paul Rusesabagina, who was immortalized in the 2004 film "Hotel Rwanda" for his efforts to shield hundreds during the 1994 Rwanda genocide. The movie turned Rusesabagina into an international hero but he fled Rwanda in 1996 because "his prominence was a threat, as was the way his account of the genocide diverged from the official narrative."

In August 2020, Rwandan agents finally caught up with Rusesabagina in Dubai and they hatched a plan to lure him to a plane so they could render him back to Kigali, where he remains in prison.

The report quotes an assessment by Kagame of the capture.

"It was actually flawless," Kagame said. "It's like if you fed somebody with a false story that fits well in his narrative of what he wants to be, and he follows it and then finds himself in a place like that."

This report by The Canadian Press was first published Feb. 4, 2021.