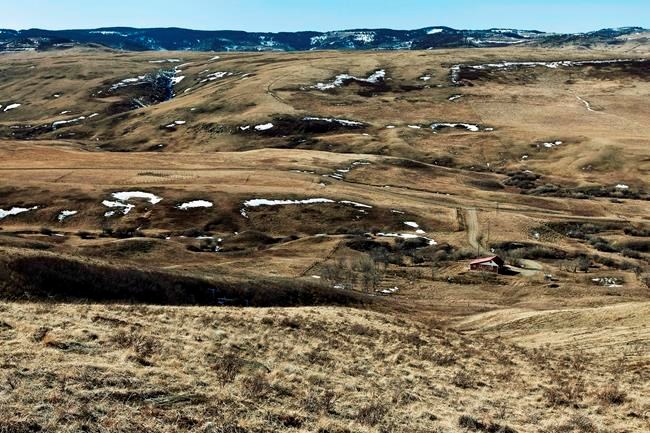 "It's part of why we are calling on this government to stop all exploration ... until we have a new plan in place that actually directs the future of this landscape," said Katie Morrison of the Canadian Parks and Wilderness Society.

Albertans are waiting for details on how the United Conservative government plans to consult with the public on coal-mining, which the province says would help diversify the economy.

The region where exploration leases have been sold is home to endangered species and holds the headwaters of much of Alberta's drinking water. Exploration and potential mines are opposed by area First Nations, municipalities, ranchers and many others.

Morrison's group took applications approved by the Alberta Energy Regulator for six coal companies planning road-building, drilling and other activities in the Livingstone public land-use zone on the eastern slopes. The plans were plotted onto maps, then toted up.

New roads, rebuilt old roads and roads that companies might use to get to their leases, when combined, average almost 1.5 kilometres for every square kilometre of land.

Work done over three years by a government-appointed working group on the Livingstone land-use plan concluded that public and industrial roads in the area should be no denser than 1.2 kilometres for every square kilometre. In the most sensitive areas, the restriction is one kilometre.

The limits were adopted in 2018 and remain legally enforceable under Alberta's Land Stewardship Act.

"Even during this exploration phase, the limits that have been put in place with great public consultation and great public input are just totally ignored as (regulators) approve these exploration permits," Morrison said.

Alberta Environment was provided with the wilderness society's research.

Alberta Energy spokesman Kavi Bal said the government was unable to comment on the road density findings. All exploration is subject to cleanup timelines, he said.

Energy Minister Sonya Savage said last week that Albertans will be asked if they want coal development at all. Morrison wonders how the high level of disturbance the applications suggest can be reconciled with the upcoming consultations.

"If that is a foretelling of what this next consultation period looks like, it doesn't give me much confidence."

She also pointed out any potential effects on the land are on top of trails and other disturbances already created by off-highway vehicle users.

The further along coal companies get, the harder it will be to bring in land-use plans and to reclaim damaged areas, she suggested.

Others question how the exploration footprint would be cleaned up.

"Coal exploration happens on steep slopes, on mountainsides and on mountaintops," said Lorne Fitch, a longtime fisheries biologist and adjunct professor at the University of Calgary.

"Some of them are such steep slopes that unless you've got a tracked backhoe, it's very difficult to drag that material back upslope to recontour the old surface. And in ... doing that, you actually damage more of the landscape."

Mountainside soils are only a few centimetres thick and are easily dispersed, he said.

"To suggest that you could actually get something to grow on that afterwards is a leap of faith."

Fitch asked the regulator if it collects security deposits to ensure exploration work is remediated.

"The AER does not collect any bonds or security for (coal exploration projects)," responded chief operating officer Martin Foy.

Companies are required to restore what they have disturbed although details vary, Foy wrote in a letter.

"The (regulator) does not have requirements pertaining to linear density of roads," he wrote. "(Alberta Environment and Parks) is responsible for implementing the ... plan and managing the footprint allowance within the plan area."

"Will you commit to ending coal exploration today, as Albertans have demanded?" she asked.

Kenney said Alberta's coal mining policy hasn't changed since when Notley was premier from 2015 to 2019.

He called the research, as well as Fitch's concerns, "a farrago of made-up facts."

Alberta's public consultations on coal mining are to begin next Wednesday.

This report by The Canadian Press was first published March 24, 2021.