OTTAWA — One of the Royal Canadian Navy's four beleaguered submarines will remain docked for repairs an extra year after a leak was discovered in a ballast tank that was not properly drained.
Dec 21, 2020 2:27 PM By: Canadian Press 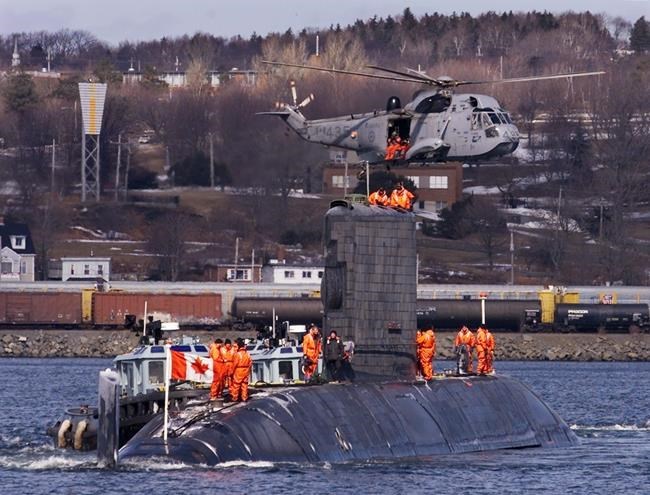 OTTAWA — One of the Royal Canadian Navy's four beleaguered submarines will remain docked for repairs an extra year after a leak was discovered in a ballast tank that was not properly drained.

The leak on HMCS Corner Brook is the latest setback for Canada's four submarines, which have spent more time in repairs than at sea since being bought second-hand from Britain in 1998.

Corner Brook has been hit particularly hard, with the vessel docked for extensive repairs and maintenance for the past six years after striking the bottom of the ocean off B.C. in 2011.

A fire also broke out aboard the hunter-killer submarine in April 2019 while it was being worked on at Victoria Shipyards, but was quickly extinguished.

While the plan was to get the submarine back in the water this past May, the Department of National Defence says the expectation now is that it won't be ready until June 2021.

That is because of the leak discovered in one of the Corner Brook's main ballast tanks following a test in March that involved draining the tank, which controls whether the vessel goes up or down in the water.

"During the test, the normal procedure for draining the tank was not followed and a leak was subsequently discovered," Defence Department spokeswoman Jessica Lamirande said in an email to The Canadian Press.

The test was conducted by defence contractor Babcock Canada, which has received $1.3 billion to repair and maintain the submarine fleet since 2008, with production staff at Victoria Shipyards, Lamirande said.

"We continue to work closely with the government of Canada to ensure the deep maintenance and refit of HMCS Corner Brook is completed in the safest manner possible," he added.

Lamirande played down the impact on the military and taxpayers, saying the costs are being covered by the contractor and that the delay in getting Corner Brook into the water hasn’t significantly affected the navy’s operations.

The incident nonetheless comes at a critical time for the submarine fleet.

Meanwhile, the official Opposition Conservatives as well as the Senate defence committee have called for the government to scrap plans to keep the existing fleet and start the process to buy replacements.

Those calls have largely focused on the fact the submarines have spent only short stints at sea since they were purchased from the United Kingdom more than 22 years ago, despite the government's having sunk billions into them.

While this latest incident appears to have been out of the government’s hands, defence analyst David Perry of the Canadian Global Affairs Institute said it nonetheless makes it more difficult to justify investing more tax dollars into the current fleet.

“When they're struggling just to keep them in the water and operating … somebody can look at it and say: ‘Is it worth the investment of money and time, given that the return in a relatively limited number of days are able to operate?’” Perry said.

Royal Canadian Navy commander Vice-Admiral Art McDonald insisted in an interview last year that the submarine fleet still has “good life” in it, suggesting the vessels can continue to operate until 2030 with some “modest investments.”

The comment followed a year in which the entire fleet was largely docked for extended maintenance work and repairs. Combined, National Defence says the submarines cost $300 million to $350 million a year to maintain.

Lamirande said HMCS Victoria returned to sea in September and is going through post-work tests while HMCS Windsor is scheduled to return to service early next year.

Lamirande did not provide an update on the fourth submarine, HMCS Chicoutimi.