CARBIS BAY, United Kingdom — Prime Minister Justin Trudeau pledged 13 million surplus vaccines to help the world get immunized against COVID-19 as he and other G7 leaders wrapped up a weekend summit in Britain dominated by the pandemic, climate chang
Jun 13, 2021 3:58 PM By: Canadian Press 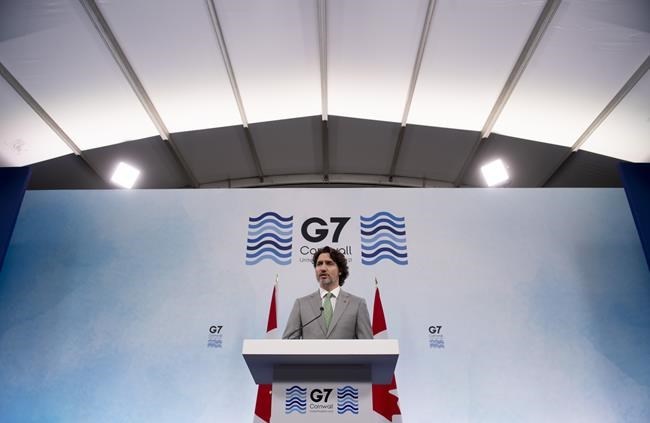 CARBIS BAY, United Kingdom — Prime Minister Justin Trudeau pledged 13 million surplus vaccines to help the world get immunized against COVID-19 as he and other G7 leaders wrapped up a weekend summit in Britain dominated by the pandemic, climate change and China.

Canada previously said it would offer up to 100 million vaccine doses to help poorer countries beat back the global pandemic, but was the only country from the G7 to not say how many of those would be actual shots rather than money.

Trudeau on Sunday said in addition to the 13 million shots it deemed as surplus, Canada paid for the purchase and distribution of 87 million doses through money already sent to the ACT-Accelerator, a global program to make sure the entire world has access to COVID-19 testing, treatments and vaccines.

The prime minister told reporters during a closing news conference that some of the promised jabs are already on their way to countries lagging wealthy nations in the worldwide immunization effort. But he stopped short of saying when the rest would arrive.

"A number of these doses are on their way as we speak, more will come in the coming months," Trudeau said. "We're going to be able to share around the world as we see Canadians getting vaccinated to higher and higher levels, and we simply do not need those doses."

The Prime Minister's Office later provided a breakdown showing more than seven million of the doses being donated are from pharmaceutical firm Novavax, whose vaccine remains in clinical trials and has yet to be approved for use in Canada.

Last month, the company said it expected to start delivering doses in the third quarter of 2021.

The remainder are Oxford-AstraZeneca doses and shots from Johnson & Johnson that Canada bought through COVAX, an international vaccine sharing initiative.

Canada has been criticized for being the only G7 country to take and use shots from COVAX.

U.S. President Joe Biden started the summit by announcing a commitment to share 500 million coronavirus vaccine doses with the world. All told, G7 leaders confirmed their intent to donate more than one billion doses to low-income countries in the next year.

But the commitment falls far short of the 11 billion doses the World Health Organization said is needed to vaccinate at least 70 per cent of the world's population and truly end the pandemic.

Trudeau emphasized that the donation would not affect Canada's own vaccination efforts, which have ramped up in recent months with the delivery of shots from Pfizer-BioNTech and, to a lesser degree, Moderna.

He said on top of sending vaccines, Canada has already spent $2.5 billion on international aide for COVID-19.

COVID-19 was not only a point of policy discussion for the G7 leaders, it also meant a new way of holding an international gathering. Elbow bumps took the place of traditional handshakes, while signs reminded those gathered behind closed doors to try and keep them open.

Masks were only donned on occasion. Trudeau wore his publicly while bumping elbows with another leader, but then went maskless when seated or standing further apart.

During one group photo taken on a beach, Trudeau was the only leader who put on a mask while greeting British Prime Minister Boris Johnson and his wife, and then folded it away when their elbows dropped.

Pictures from a reception with the Queen and Prince Charles showed a bearded Trudeau without a mask in close conversation.

While the pandemic figured prominently in the G7 leaders' discussions and Canada's post-summit pledges, the thorny issue of how to handle increasing competition and aggression from China was also top of mind throughout the weekend.

G7 leaders presented an infrastructure plan called "Build Back Better for the World," calling for spending hundreds of billions of dollars alongside the private sector while adhering to climate standards and labour practices.

It is designed to compete with China's "Belt and Road Initiative," which launched a network of projects in large parts of the world, primarily Asia and Africa. Critics say China's projects often create massive debt and expose nations to undue influence by Beijing.

Trudeau did not explicitly mention the new initiative or China's treatment of ethnic minorities such as Uyghur Muslims, topics touched on during the summit, but did thank fellow G7 leaders for supporting Canada's calls for the immediate release of Michael Kovrig and Michael Spavor. The official post-summit communique from all leaders condemned the practice of arbitrary detentions in China, but made no specific mention of the Canadians.

"What has happened to the two Michaels should not have happened, and indeed could happen in any country in the world," Trudeau said. "The use of arbitrary detention and coercive diplomacy by China is a concern to us all."

Beijing detained the two Canadians days after the arrest of Huawei executive Meng Wanzhou at the Vancouver airport on an extradition request from the United States.

Biden, attending his first G7 summit as president, fought for the leaders' joint statement to include specific language criticizing China's use of forced labor and other human rights abuses as he worked to cast the rivalry with Beijing as the defining competition for the 21st century.

The final communique called for another investigation by the World Health Organization into the origins of COVID-19, urged China to respect human rights in Xinjiang and democracy in Hong Kong, and expressed concern about Chinese aggression in the South and East China Seas.

Canada, the United Kingdom and France largely endorsed the Biden administration's position, while Germany, Italy and European showed hesitancy, according to an administration official who observed some of the talks and briefed reporters on condition of anonymity.

When asked if he would describe China as an adversary, Trudeau emphasized the need to both work with the country on global challenges like climate change while recognizing it as a competitor on trade and a source of concern when it comes to human rights.

The leaders of the world's richest countries also agreed to endorse a global minimum tax of at least 15 per cent on multinational corporations. The decision had been widely anticipated after finance ministers earlier this month embraced the plan to stop corporations from using havens to avoid taxes and thus deprive some countries of much-needed revenue.

This report by The Canadian Press was first published June 13, 2021.

—with files from The Associated Press.