Bright lights in the sky: A look at some of the UFO sightings in Canada last year

WINNIPEG — A recent survey posted by Ufology Research in Winnipeg says there was a jump in UFO sightings in Canada last year. Here are some of the 1,243 sightings: Jan.
Mar 30, 2021 3:39 PM By: Canadian Press 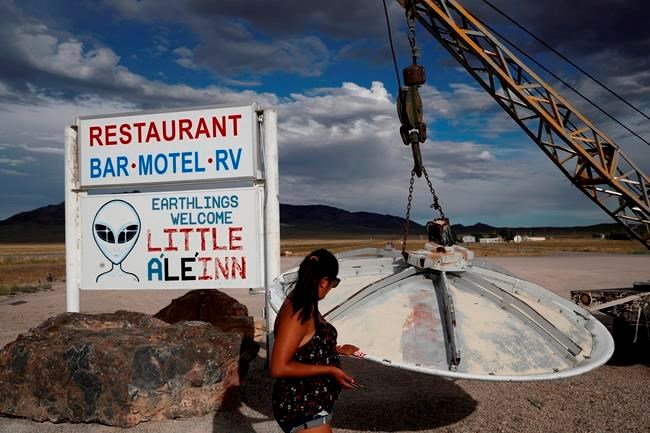 WINNIPEG — A recent survey posted by Ufology Research in Winnipeg says there was a jump in UFO sightings in Canada last year. Here are some of the 1,243 sightings:

Jan. 23, 2020 — Someone shovelling snow off their Toronto balcony reported seeing a two-metre long object silently levitating about 1.5 metres away. As the person continued staring at the black and silver object, one side folded and disappeared.

Jan. 23, 2020 — On the same day near Guelph, Ont., a person reported seeing two bright lights following a plane. As the plane went in another direction, the lights continued moving forward at a fast speed and a massive circular object appeared behind the lights. The observer said it appeared the lights were escorting the UFO.

Feb. 3, 2020 — It was a clear day when a man driving down a rural road in Alberta with his son saw a grey pie-shaped object levitating in the sky just before it rotated, turned black and suddenly disappeared. Within the next minute, they saw a military plane flying towards the mysterious object. They said the round UFO had no windows or markings.

July 24, 2020 — A pilot of a North Star Air Ltd. plane heading to Sachigo Lake, Ont., from Thunder Bay, Ont., saw an object pass over the plane's right wing. The pilot said the UFO was about one-metre in diameter. The plane's radar indicated there was no object in the vicinity.

Aug. 30, 2020 — A man in Ottawa pulled out his binoculars after observing an object with flashing lights hovering in the clear sky. He described the chevron-shaped UFO as black with green, blue and purple with flashing lights underneath. He also said his wife confirmed that the object levitated in the sky for about 20 minutes before it moved west.

This report by The Canadian Press was first published March 30, 2021.