Biden pledges to help two Michaels and a blackface 'error': In The News for Feb. 24

In The News is a roundup of stories from The Canadian Press designed to kickstart your day. Here is what's on the radar of our editors for the morning of Feb. 24 ... What we are watching in Canada ...
Feb 24, 2021 1:15 AM By: Canadian Press 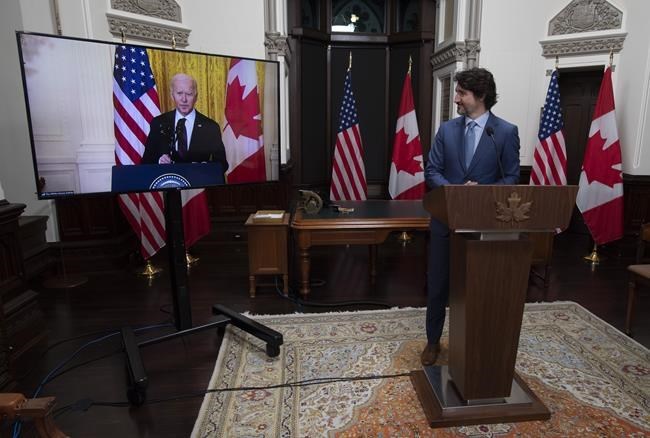 In The News is a roundup of stories from The Canadian Press designed to kickstart your day. Here is what's on the radar of our editors for the morning of Feb. 24 ...

Joe Biden granted Justin Trudeau at least one of the items atop his wish list as they met for the first time as president and prime minister.

Biden pledged to help get two Canadians out of a Chinese prison, saying "humans being aren't bargaining chips."

Strenuous expressions of presidential dismay were nowhere to be seen during the final two years of Donald Trump's tenure as Michael Kovrig and Michael Spavor languished behind bars.

That all changed yesterday as Biden and Trudeau -- one in Washington, D.C., the other in Ottawa -- wrapped up a warm and comprehensive, if virtual, summit meeting. It was Biden's first since taking office.

Spavor and Kovrig were detained in China in an apparent act of retaliation after Canada arrested Huawei executive Meng Wanzhou in December 2018 on American charges of violating sanctions on Iran.

They have remained in custody ever since.

Biden offered no hints about how the White House might help secure their release.

TORONTO -- CTV says it made an "error" by placing an "offensive image" of actress Delta Burke in blackface among its TV program highlights for Black History Month.

A spokesman for the broadcaster says the blackface picture, taken from an episode of 1980s hit "Designing Women," is one that "should not have been used in any context."

CTV has since removed the blackface image as well as the full episode of "Designing Women."

The photo was part of a rotation of images in the CTV Throwback section of its mobile app that directed viewers to popular Black-led sitcoms on the streaming service from decades past, including "The Jeffersons," "Good Times" and "Sanford and Son."

Sandwiched between those images was a still photo from "Designing Women," which featured the blackface-wearing Burke alongside her Black co-star Meshach Taylor.

It was taken from a 1989 episode titled "The Rowdy Girls," which revolves around the sitcom's stars being booked to perform at a talent show as Motown legends the Supremes.

The group debates whether to play their parts in blackface and ultimately concludes it's not the best decision. However, Burke's character doesn't get the message and shows up with her face painted anyway to sing alongside her friends.

"Designing Women," set in Georgia, often grappled with the rapidly changing social issues of the U.S. South, such as race and sexuality, in a way that would be considered outdated by today's standards.

In a career filled with remarkable comebacks, Tiger Woods faces his toughest recovery of all.

Woods was driving through a sweeping, downhill stretch of road through coastal suburbs of Los Angeles when his SUV struck a sign, crossed over a raised median and two oncoming lanes before it toppled down an embankment, coming to a halt on its side.

The crash caused “significant” injuries all down his right leg that featured rods, pins and screws during what was described as a “long surgical procedure” at Harbor-UCLA Medical Center.

Anish Mahajan, the chief medical officer, said Woods shattered tibia and fibula bones on his right leg in multiple locations. Those were stabilized by a rod in the tibia. He said a combination of screws and pins were used to stabilize additional injuries in the ankle and foot.

The single-car crash was the latest setback for Woods, who at times has looked unstoppable on the golf course with his 15 major championships and record-tying 82 victories on the PGA Tour.

After four back surgeries that kept him out of golf for the better part of two years, he won the Masters in April 2019 for the fifth time, a victory that ranks among the great comebacks in the sport.

No charges were filed, and police said there was no evidence he was impaired.

Regional diplomatic efforts to resolve Myanmar’s political crisis have gathered pace, as protests continued in Yangon and other cities in the Southeast Asian country calling for restoration of the civilian elected government of Aung San Suu Kyi.

Indonesia's foreign minister visited Thailand on Wednesday as part of her efforts to co-ordinate a regional response to the Feb. 1 coup.

Elsewhere, more than 130 civil society groups and other organizations concerned about the military takeover have called for a global arms embargo on Myanmar.

The return of elite domestic curling competition after a nearly 12-month absence saw a significant drop in Canadian viewership.

Numeris ratings for the opening weekend of the Canadian women's curling championship in Calgary were down 17 per cent from the same time period in the 2020 competition.

An average audience of 331,000 viewers tuned in on the opening weekend of the Scotties Tournament of Hearts, TSN says.

That compared to an average audience of 398,000 viewers who watched the opening weekend of last year's Hearts in Moose Jaw, Sask.

Play began Friday night with the preliminary round opener in a bubble setting at Markin MacPhail Centre. The 18-team competition continues through Sunday.

Ratings included viewers from all TSN platforms, including online and mobile.

The highest-rated weekend draw was a Sunday night game between Alberta's Laura Walker and Ontario's Rachel Homan. That matchup between undefeated skips pulled in an average of 427,000 viewers.

One of the world's better known fans of mystery novels, Hillary Rodham Clinton, is now writing one.

Clinton is teaming up with her friend, the Canadian novelist Louise Penny, on “State of Terror,” which has a plot that might occur to someone of Clinton's background.

It features  a “novice” secretary of state, working in the administration of a rival politician, tries to solve a wave of terrorist attacks. The novel comes out Oct. 12, and will be jointly released by Clinton's publisher, Simon &amp; Schuster, and Penny's, St. Martin's Press.

“Writing a thriller with Louise is a dream come true," Clinton, who has expressed admiration for Penny and other mystery writers in the past, says in a statement  "I’ve relished every one of her books and their characters as well as her friendship. Now we’re joining our experiences to explore the complex world of high stakes diplomacy and treachery. All is not as it first appears.”

Penny, an award-winning author from Quebec whose novels include “The Cruelest Month” and “The Brutal Telling,” says that she could not “say yes fast enough” to the chance of working with Clinton.

“What an incredible experience, to get inside the State Department. Inside the White House. Inside the mind of the Secretary of State as high stake crises explode," she said. "Before we started, we talked about her time as Secretary of State. What was her worst nightmare? ‘State of Terror’ is the answer.”

Fiction writing and worst-case scenarios have become a favourite pastime for Clinton and her husband, former president Bill Clinton. He collaborated with James Patterson on the million-selling cyber thriller “The President is Missing,” and on a new novel, “The President's Daughter,” which comes out in June.

This report by The Canadian Press was first published Feb. 24, 2021