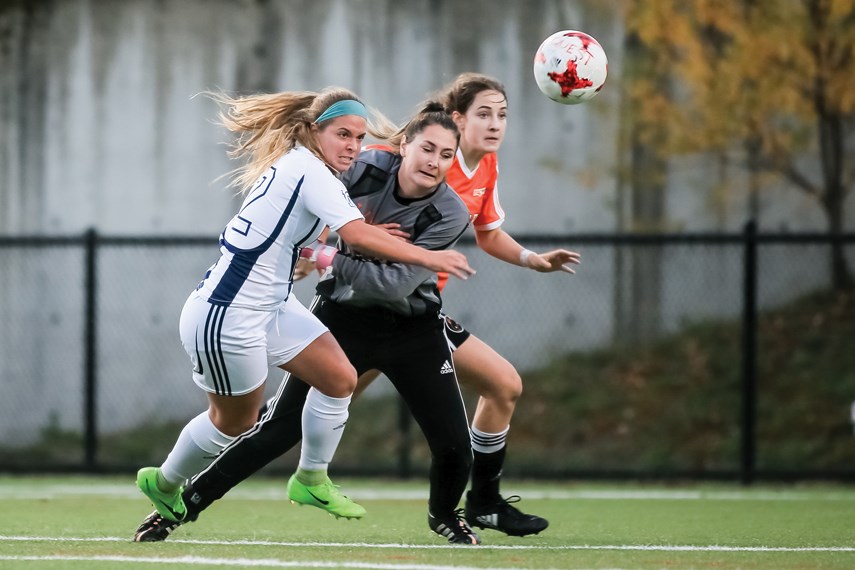 Catrina Olstrom of the Capilano Blues muscles past a pair of Langara Falcons on her way to scoring the lone goal in a 1-0 win in the PacWest semifinals played Friday in Squamish. The Blues lost to Douglas College in a shootout in the gold medal game. photo supplied Paul Yates/Vancouver Sports Pictures

The Capilano Blues women’s soccer team took home silver at the PacWest provincial championships over the weekend, just missing gold despite not giving up a goal during the tournament.

The Blues, ranked No. 2 heading into the championships, outlasted third-ranked Langara 1-0 in semifinal action Friday in Squamish to make the final. First-year forward Catrina Olstrom scored the lone marker of the game, beating a Langara defender and goalkeeper to a through ball before squeezing a shot off that just rolled across the line in the 44th minute. The Blues shut the door from there, with goalkeeper Nikki Gerbrandt earning a shutout to secure a spot in the final.

One night later Capilano did all they could to topple top-ranked Douglas College except for finding the back of the net, eventually falling in a shootout after playing 120 minutes of scoreless soccer.

In the shootout the Royals, ranked No. 4 in the country, scored three time in five shots while the Blues could only manage two goals. The win gave Douglas College PacWest’s sole berth in the CCAA national championships.

The silver was Capilano’s second medal in as many year following a bronze won at least year’s tournament. It was the best showing for the Blues since the team won gold in 2007.

Following the final Olstrom was named the tournament’s Top Forward while Capilano’s Jessica Price earned the Top Defender award for her role in helping the Blues keep a clean sheet in both games.