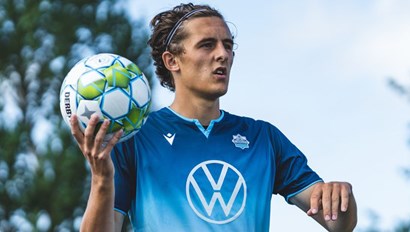 Last week the 21-year-old fullback signed a standard player contract, with options for 2022 and 2023, with HFX Wanderers FC of the Canadian Premier League. Ruby inked the deal after playing with the team on a U Sports developmental contract for the 2020 CPL season. The CPL allows university players to suit up in professional games while maintaining their eligibility for their varsity teams.

Ruby, an Argyle Secondary alum who played for Trinity Western University, appeared in eight games with the Wanderers last year, helping the team reach the CPL finals. Ruby was picked 16th overall by the Wanderers in the 2019 CPL-U Sports draft.

“Signing on with Trinity Western, my goal was always to play professionally, so I was hoping it would open opportunities for me and that it would be a stepping stone to the professional pathway,” stated Ruby in a team release. “Once the CPL-U Sports draft was introduced, it opened that door for me to finally earn a professional contract.”

Ruby is a former member of the Vancouver Whitecaps Academy and represented Canada at the under-17 level. He also played USL League Two soccer with the Lower Mainland’s TSS Rovers before joining the Wanderers.

Ruby will also continue his post-educational studies while in Halifax, according to the media release.

“We’re pleased to support Jake in his pursuit of a professional career while encouraging his academic aspirations throughout his time in Halifax,” stated HFX Wanderers VP of football operations Matt Fegan. “We always believe players should have an eye on their future and education is an important part of setting themselves up properly.”

Check out this highlight package from Ruby's first campaign with the Wanderers: