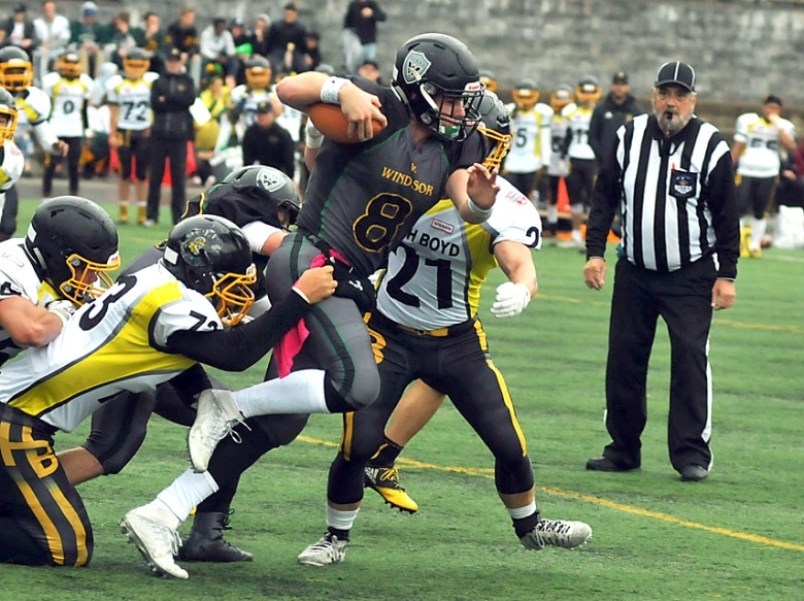 Two North Shore athletes and one highly regarded referee were honoured at Sport B.C.’s 52nd annual Athlete of the Year Awards held recently at the Westin Bayshore in Vancouver.

Two-sport star Ryan Baker took home the male high school athlete of the year award after championship seasons on the ball diamond and football field. Baker was a member of the North Shore Twins team that won the B.C. Premier Baseball League title last year. His greatest hits, however, came on the gridiron where Baker took home league MVP honours while quarterbacking the Windsor Dukes to an undefeated season. Baker was also named MVP of the AA championship final after rushing for three touchdowns and throwing for two more in a 44-29 win over the Abbotsford Panthers.

West Vancouver super senior Christa Bortignon was named the master athlete of the year following another record-setting season in track and field. In 2017 Bortignon turned 80, allowing her to chase a new set of age-group world records in the women’s 80-84 division. Last year she set world records in indoor and outdoor long jump and triple jump, as well as Canadian records in seven outdoor and five indoor events.

North Vancouver’s Michelle Pye earned the In Her Footsteps award. Pye is one of only four female international FIFA referees in Canada. She was one of two Canadian referees to work at the 2015 Women’s World Cup and has also refereed four world championships and numerous Olympic and World Cup qualifiers.

In Her Footsteps, an annual recognition program hosted by ProMotion Plus, celebrates women who have demonstrated excellence in the field of sport and/or recreation, brought pride to the province and had a significant positive impact in the world of sport and recreation in B.C. The program has honoured more than 50 female leaders and ambassadors across the province for accomplishments at home and on the international stage.