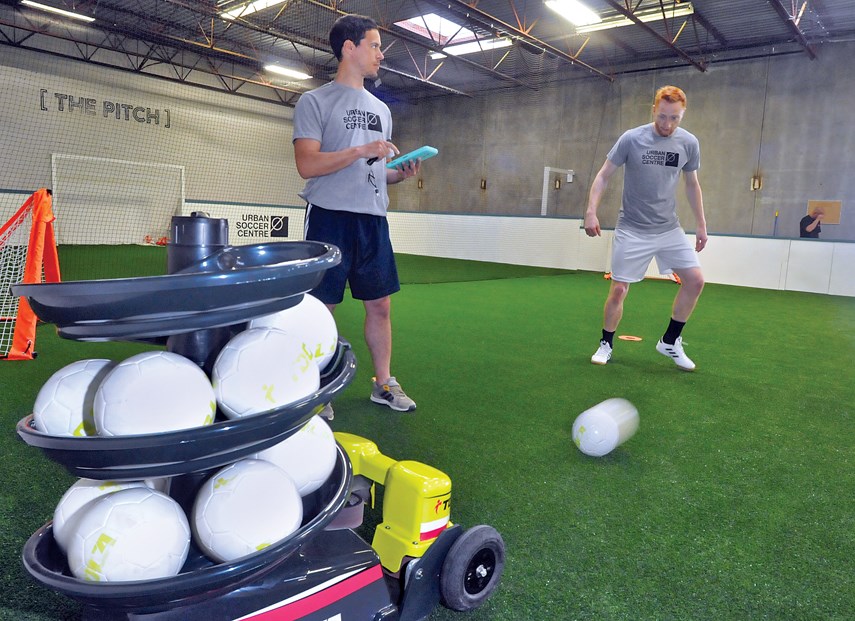 The high-powered proprietors of a new soccer training centre in North Vancouver are hoping to bring not just the skills, but also the culture and passion of the beautiful game to players on the North Shore and beyond.

Urban Soccer Centre, located in a warehouse space in the shadow of Ironworkers Memorial Second Narrows Crossing, officially swung open its big garage door Monday to welcome players to its two-storey soccer training facility. The centre is the brainchild of three former professional players – Alexander Elliott, Michael D’Agostino and Rob Friend – who all have ties to the North Shore.

“First and foremost it’s enjoyment of the game,” Elliott said of the concept behind Urban Soccer Centre. “We want a six-year-old or an adult to just come in and feel comfortable and enjoy playing the game the way they want to play it.”

Elliott, a Vancouver native, played professionally in the German Bundesliga and spent a season with the Vancouver Whitecaps. This spring he was named the new head coach of the Capilano University men’s soccer team. D’Agostino played for age-group national teams, suiting up for Canada in the 2007 U20 World Cup, and he’s now the assistant technical director of North Vancouver Football Club. Friend, a Kelowna native, played professionally in Europe and MLS and also suited up in 32 games with the senior men’s national team.

The two-storey space they’ve created in North Vancouver includes a lounge and small field for 3-v-3 games on the main level and a larger field on the upper level which will be used for training sessions or 5-v-5 matches. The upper field will also be home to a high-tech system called Toca, a training regime that involves the use of machines that fire soccer balls onto the field of play much like a pitching machine. Coaches control the speed, direction and trajectory of the balls and can incorporate all manner of goals, obstacles, movements and even special lighting and audio cues into the drills.

“It’s a modern approach to development through quality repetition and augmented development training,” Elliott said, giving the official spiel that accompanies Toca training. Much more importantly, however, it’s a whole lot of fun.

“When a kid goes in there they feel like a kid in a candy shop,” said Elliott. “Mike, Rob and myself go in there sometimes and we just go, ‘wow.’ We’re having fun hitting volleys from this machine in our mid-30s. We kind of get a feel of how that six-year-old feels coming in. It’s like a video game for a soccer player.”

The fast-paced environment is meant to give players a high number of varied touches on the ball, improving their skill quickly as they go through drills. The Urban Soccer Centre owners are hoping that they can help some players reach the highest levels of the sport.

“Both Michael and I coach with the Whitecaps residency on the boys side,” said Elliott. “We’re all invested in supporting Canada’s next generation of players.”

Elliott was quick to add, however, that the facility is meant for all players, not just those dreaming of becoming the next Alphonso Davies, the 17-year-old who is already starring for the Vancouver Whitecaps and senior national team. Elliott said he expects the centre to be rocking from 8 a.m. to 11 p.m. every day, with personal and team training sessions, youth camps, and weekend soccer jamborees running during the day and adult leagues running at night.

“We can’t just think that we’re going to produce 20 Alphonso Davies unless the actual culture of soccer in the Lower Mainland comes to the point where we’re more invested in it, we watch it more, we play it more, we enjoy it more, and through generations and generations it becomes more engrained, and we produce more players,” he said, adding that he and his partners have had a blast getting the centre up and running.

“It’s been exciting. There are so many people that are highly invested in soccer in Vancouver, so there’s been a ton of local support and a ton of influencers in the soccer community who have supported and helped this vision. It’s been pretty fun, to be honest. It’s been really fun to build out. It’s about bringing like-minded people together who love the game.”

The Urban Soccer Centre is located at 20 Orwell St. in North Vancouver. For more information on the centre and its programs visit urbansoccercentre.ca.