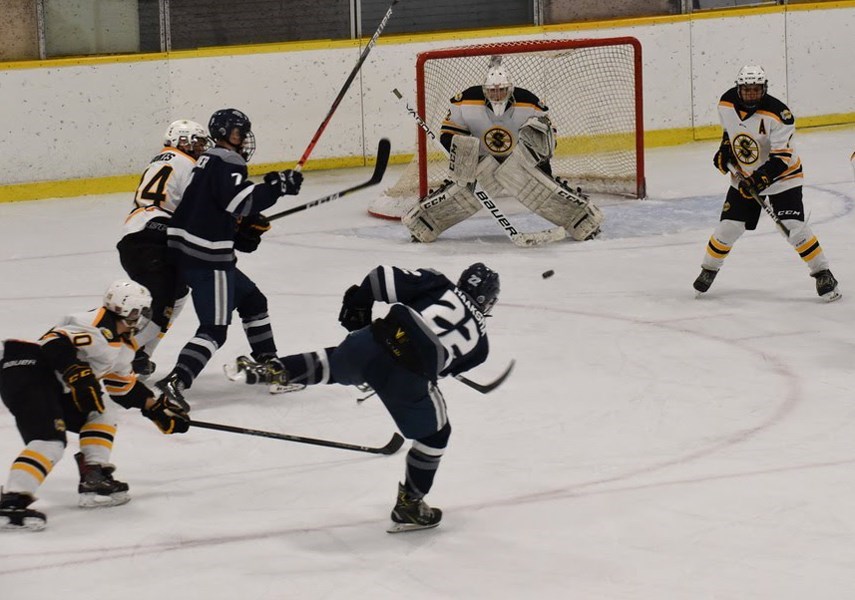 The North Van Wolf Pack battle the Grandview Steelers in a game during the 2019-2020 season. Jerome Marburg

For the second year in a row there will be no provincial champion crowned for Junior B hockey in British Columbia due to the ongoing COVID-19 pandemic.

BC Hockey announced last week the cancellation of the annual Cyclone Taylor Cup tournament featuring Junior B league champions from around the province, as well as the Coy Cup, B.C.’s senior male AA championship tournament.

The news was another tough blow for the North Van Wolf Pack, a team that has been on the hunt for its first provincial title for the past several years. The Pack put together a dream season for the 2019-'20 campaign, winning 40 of their 44 regular season games to set new Pacific Junior Hockey League records for points and wins.

Their championship quest ended early, however, as the exploding COVID-19 crisis caused the cancellation of the 2020 PJHL championship final just as it was about to begin. The 2020 Cyclone Taylor Cup was also cancelled as sports leagues around the world shut down.

This season the PJHL began play in October with a cohort system in place, but provincial health orders paused the season in early November, and teams haven’t played any games since. Last week’s announcement confirmed there will be no provincial championship tournament again this year.

“You always want to have that goal of a championship,” he said. “It’s unfortunate.”

Junior teams around the province did get some good news over the holiday break, as a restriction banning team sports for all adults was amended to allow overage players – up to 22 years of age – to resume training with underage players on the same team. Junior hockey players can range from 16 years of age to 21.

The previous health order banning adults from playing meant that eight members of the Wolf Pack were not permitted to train with the team. They’re back on the ice now, working out with teammates with the hope of some game play to finish the season. The team is doing their best to stay active even while health orders mandate physical distancing among players at all times.

“We've definitely had to get creative as coaches,” said Samson. “We're trying to keep these guys fresh, we don't want to run the same ten drills for two months straight.”

Practice planning for North Van got a boost over the holiday break as 27-year-old Dalton Thrower, a professional player from Squamish and former captain of the WHL's Vancouver Giants, has been out helping coach the team.

NHL hockey is back starting tonight, and although they all love watching the sport at its highest level, Samson admitted that it is a little tough to see those players back on the ice for the start of a new season while junior leagues are still shut down.

“It's frustrating,” he said. “But I understand that these guys are getting tested daily, from what I'm hearing, and we just don't have the capability to do that. These kids have lives beyond hockey, so we can't just put the team in a bubble or the league or the cohort in a bubble. It's just not realistic at this level.”

Samson, however, is holding out hope that there will be some sort of game action to finish off the season. The latest provincial health orders restricting sports activities are due for an update on Feb. 5.

“We're just waiting to hopefully get some good news here,” said Samson. “There's still potential for some sort of a championship where I think you'll get that playoff intensity. The guys just really want to compete. … If and when this order is lifted and the ban is lifted, then I think we should see some pretty good hockey.”