With dine-in out, more North Shore patios coming in hot 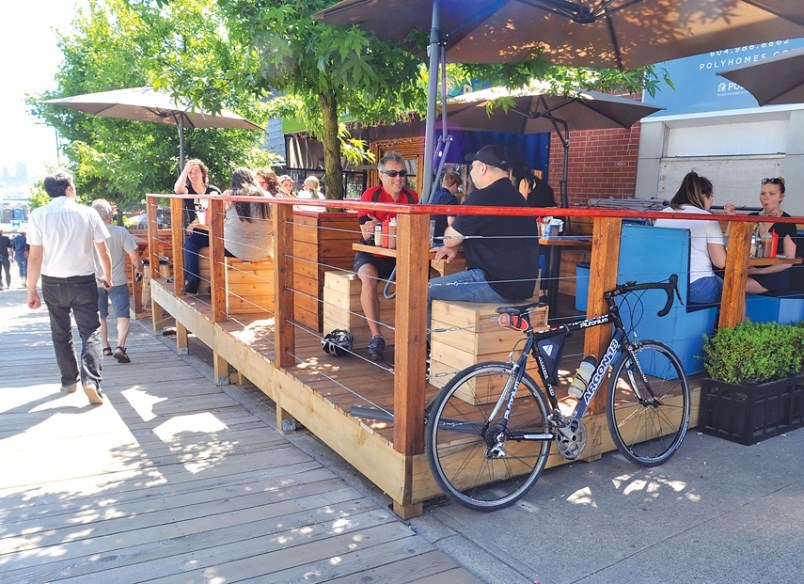 North Shore restaurateurs are banking on some sunny weather and a healthy appetite for takeout and al fresco dining to get them through the latest round of COVID-19 restrictions.

Provincial health officer Dr. Bonnie Henry has told restaurant owners they will not be allowed to offer indoor dining until May at least, as the third wave of the pandemic sends record numbers of people to hospital.

Lower Lonsdale BIA director Greg Holmes said as soon as word got out, he and local business owners were on the phone with City of North Vancouver staff who are fast tracking applications for new patios.

“We're heading into summer. We're looking at it like this indoor dining ban could be with us for a long time. Let's create all the outdoor infrastructure now,” he said. “As much as we have a lot of outdoor space within the business community now, there's going to be more coming.”

Fishworks is installing a sizable new patio on Lonsdale Avenue. The District of West Vancouver quickly gave the green light for the Beach House to extend its patio into Dundarave Park. And Holmes said the city is planning to convert the entire lane between West Esplanade and Carrie Cates Court behind “Restaurant Row” into an outdoor food court style dining area available to anyone in the neighbourhood.

“We're really pleased with that. It's actually a considerable sized space given where it is, and it's right in the heart of the district. It will be well used,” he said.

Holly Kemp, vice-chair of the West Vancouver Chamber of Commerce and manager of Troll’s Restaurant in Horseshoe Bay, said local restaurants have done a good job of letting their clientele and surrounding community know how important it is to transition to takeout and patio dining for the time being.

“If you want these businesses to still be there when this is done, you're going to have to support them now, not later, and people are stepping to the plate,” she said.

Smaller restaurants with no ability to trade parking for patios will have a harder time, Kemp noted, and the industry’s leadership has been lobbying senior levels of government to continue wage and rent subsidies simply because the future remains so uncertain.

The government’s strategy has been to keep as many things open as possible without overwhelming the healthcare system, but Kemp said the uncertainty and shifting restrictions is difficult for businesses that need to worry about staffing and inventory.

“I think there needs to be a clear mandate on how they're going to stop the transmission and if that's a full lockdown, let's just do it and get it over with,” she said.

Even though the restrictions are much the same as they were shortly after the pandemic was declared, business owners have learned to adapt and there isn’t the same existential dread there was this time last year, Holmes added.

“We've got fantastic entrepreneurs and innovative business owners in this community. No, the sky is not falling,” he said

Much like the city has chosen to make its pilot project to allow alcohol in some parks permanent, Holmes is predicting there will be some COVID-related changes the city and community will want to stay long after everyone has been vaccinated.

“There are a lot of legacy pieces that are going to come out of this pandemic for us and I think there's going to be a whole new outdoor patio culture in North Van that nobody's ever seen before,” he said.