Squamish Deacon Rennie Nahanee and his family reflect on what the Pope's recent apology means, and the symbolism of the Pope coming to Canada.

For immediate assistance to those who have been affected by the residential and day school systems, the Indian Residential School Survivors Society Crisis Line is available 24 hours a day at 1-800-721-0066.

As the Pope sat down with nearly 200 First Nations, Inuit and Métis delegates last week, the apology given has received a mix of welcomed relief and desire to do more.

Giving his speech in Italian, Pope Francis told delegates that he feels “sorrow and shame – for the role that a number of Catholics, particularly those with educational responsibilities, have had in all these things that wounded you, in the abuses you suffered and in the lack of respect shown for your identity, your culture and even your spiritual values.

“All these things are contrary to the Gospel of Jesus Christ. For the deplorable conduct of those members of the Catholic Church, I ask for God's forgiveness, and I want to say to you with all my heart: I am very sorry. And I join my brothers, the Canadian bishops, in asking your pardon,” he said.

Sḵwx̱wú7mesh Úxwumixw (Squamish Nation) member and St. Paul’s Parish Deacon Rennie Nahanee told the North Shore News the Papal apology made him feel "elated" and makes his job of reconciliation between the church and Indigenous people a lot easier.

“But that's only the start. People wanted the apology; they got the apology. So, what's next is reparation, restitution,” Nahanee said. “How is the church going to make amends for things that they did in the past. And then what will happen going forward? … I believe that the church in Canada, the bishops of Canada, want to develop a good relationship with Indigenous people. And they already have their marching orders, which would be the TRC [Truth and Reconciliation Commission’s] calls to action.”

Nahanee said the Pope’s intention to come to Canada to meet with Indigenous people after being invited by Canadian Bishops is a sign of good faith, and the “pre-meeting” in Rome has shown the Holy Father the sorrow, anger and hope that Indigenous people have.

Noting the Catholic Church in Canada announced late last year its intention to raise $30 million through the Indigenous Reconciliation healing fund, as a result of a class action lawsuit, Nahanee said so far only a tenth of that has so far been collected.

“I think what happened was [they] just couldn't find people in the congregation to give that money, because that's where the money is coming from -- people sitting in the pews,” Nahanee said. “They don't understand the reason for why these Native people need all that money. … They understand hurricanes and flooding in the other countries, [and] give money right away, but they don't know anything or enough about their neighbours and the original people of this land of whom they're benefiting.”

Even as the Catholic Church has approximately $3.3 billion worth of assets, according to Charity Intelligence figures released in 2021, Nahanee believes it’s up to congregations to pay that money, not just the church body.

“Part of the TRC calls to action was to educate the people in the pews about why they need to apologize to Indigenous people, and the history of indigenous people. They won't know that if the money is coming from anywhere [else],” he said. “If the church uses funding from somewhere else, then these people are not learning about how their church offended, almost destroyed the original people of this country. They need to know.

“It's so easy to give money for anything, but it has to be a little bit deeper than that.”

Nahanee said the Pope must come to Canada to meet with Indigenous people face-to-face. Without coming, the apology is only as good as a phone call where you can’t see their expression, body language, or be able to gauge truthfulness and sincerity.

“He has to be over here, because the people of Canada will realize that the Pope apologizing to the Indigenous people of Canada, [means] there must be some truth to all the stories and history that we've been hearing about them,” he said. “Perhaps they'll listen closer. Perhaps they'll be swayed to learn more about our history and give some money to the bishops for their cause for reconciliation and healing.

“And I believe that the Holy Father should come to where all the problems began, which is in Kamloops with the unmarked graves. … So he has to come to Canada, as Pope John Paul II did, and visit the people that were colonized.”

Nahanee noted that the Papal Bulls of Terra Nullius and the Doctrine of Discovery “started all our problems. … That's how they took all our land and resources and never gave us a dime. In our land mass, we own less than one per cent of Canada.”

Nahanee believes the way the church can move forward is by creating tangible changes within the church, including things like his Sḵwx̱wú7mesh Sníchim (Squamish Language) mass which he holds once a month, the divestment of the church’s money from banks that support the construction of pipelines, which “are oppressing us,” and the replacement of Christian songs within services with Squamish songs, like the canoe journey song.

Along with his older siblings, Nahanee is an Indian Day School survivor. Recalling a time when he got the strap for throwing a snowball, Nahanee said being made an example of and having to stand up in front of all the kids, “hurts more. I’ll never forget them.”

Nahanee’s brother and Squamish Nation carver Jason Nahanee said the Pope’s apology is “about time.” Jason Nahanee previously financially settled through class actions, however, he explained he couldn’t get all the paperwork in on time because it was too painful to go back and think about it all. 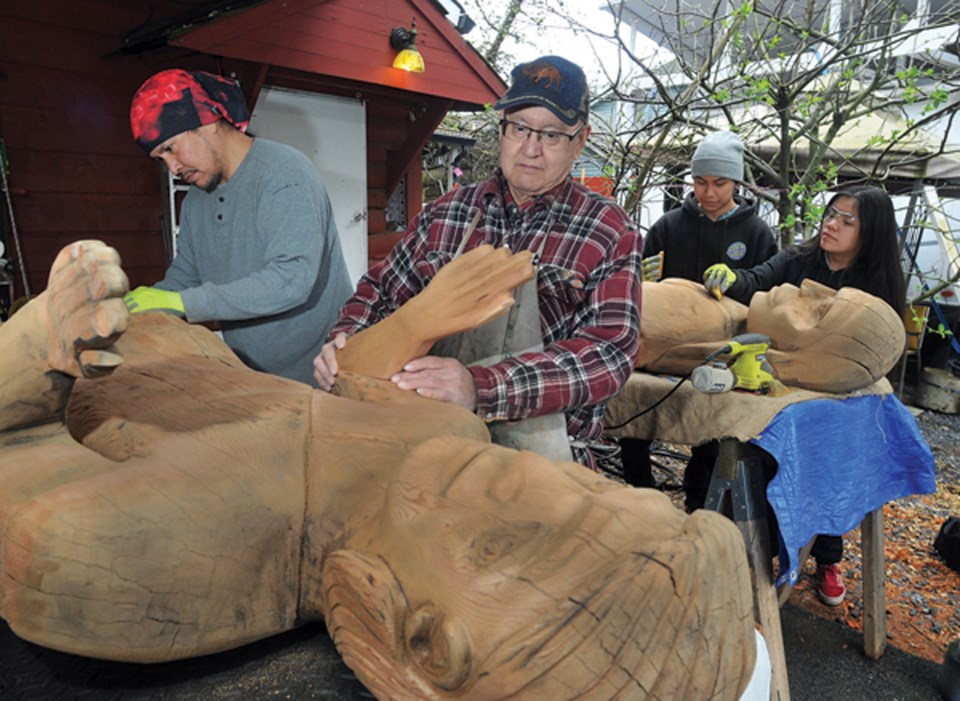 “Even today, I think it's still affected my life in various ways. My health, my mental ability, especially in schooling,” Jason Nahanee said. “I managed to get to schooling myself, I have a law degree from the University of Victoria, I'm a Juris Doctor, but getting there took a lot of time. I think the residential schools knocked a lot of the initiative out of me that most people have.

“An apology would be appropriate,” he said.

Jason Nahanee said the apology, however, is “window dressing” at this point. “I mean, what does it really do? … I mean, they compensated us for being in residential school. But I'm still sort of the same mind as I was before,” he said. “Money really isn't anything, although I could use a lot more of it. Because I think I lost a lot of opportunities because of residential school.”

Currently working with his son and grandson on refurbishing the St. Paul’s Residential School Survivors memorial that was vandalized at the end of January, Jason Nahanee said the Pope’s upcoming visit should drive the search for reconciliation.

“That's probably one of the good things that comes out of it, [when] he apologizes, it’s sort of admitting they had a part in it,” he said.

The brother's cousin, Jo-Ann Nahanee, told the North Shore News that after the apology on Friday, she spent some quiet time reflecting and sitting in her emotions, as the apology triggered her Post Traumatic Stress Disorder.

Being a residential school survivor herself, Jo-Ann Nahanee said it can be excruciating pain.

Learning that her PTSD won’t go away, and not knowing when she might be triggered, Jo-Ann Nahanee said she didn’t expect to have the reaction she did, “Because for me, this is like a political apology. It was very much like the liberals when they made the apology.

“I didn't get a sense at all that it was really heartfelt. For me that's what becomes important, is that it's heartfelt. And to me when the Pope was reading a script, somebody had wrote him his script, and he was watching his p's and q's. And he really wasn't connected to us when he was reading from a piece of paper,” she said.

Jo-Ann Nahanee said she didn’t consider the Pope’s words an apology, and what she would like, is for the church to make amends.

Jo-Ann Nahanee said that she would love if the Pope could come and sit across from her and have a conversation. Explaining why it’s so important, she said it’s about the energy that can be exchanged.

“That connectedness, and then for myself, I can get the sense, I have the feeling whether or not it was a heartfelt apology, or an amends,” she said.