West Vancouver council was overly eager and at least a little confused in unanimously calling for a ban on liquefied natural gas tankers July 21, according to Mayor Michael Smith.
Aug 8, 2014 12:00 AM By: Jeremy Shepherd 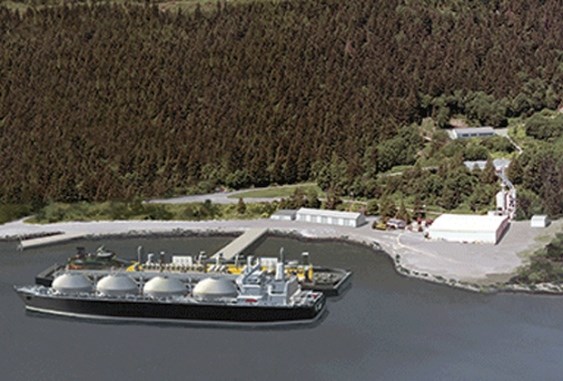 An artist's renderings of LNG tankers in Howe Sound.imge supplied

West Vancouver council was overly eager and at least a little confused in unanimously calling for a ban on liquefied natural gas tankers July 21, according to Mayor Michael Smith.

After a delegation warned that an LNG terminal in Squamish could turn Howe Sound into a "marine desert," council deviated from their usual routine by petitioning the federal government to bar LNG tankers from Howe Sound.

Council ordinarily waits for a staff report before acting on a delegation's request.

"All blame lies at the feet of the chairman of the meeting," Smith said. "My legendary impatience sometimes gets the better of me after over an hour of going around in circles on a debate. You get desperate to call a question, any question."

Council passed the motion unanimously, but there was some bewilderment as to what was being debated.

"I didn't know what we voted for," said Coun. Craig Cameron. "This is probably the only vote that I've been embarrassed about in three years on council."

Smith, Cameron and Coun. Trish Panz said there was confusion regarding the motion.

Prior to the meeting, the plan was to request West Vancouver take part in any environmental assessment or working group related to the LNG terminal. During the 30-minute debate that followed the presentation, the resolution grew to include voicing concerns to the Environmental Assessment Office and requesting the federal government for an LNG tanker ban in Howe Sound.

"We ultimately didn't follow due process," Cameron said, discussing the charged atmosphere in chambers that evening.

"These are billion dollar projects and we can't be (making decisions) based on emotion," he said.

Council is slated to revisit the issue Sept. 8 or 15, following a presentation from Woodfibre LNG - the company seeking to liquefy and export 2.1 million tonnes of LNG per year by 2017.

The $1.7 billion facility has not yet entered its environmental assessment.

"I disagree with the motion, the way it has been passed, and its timing," Weston wrote.

In an editorial that marks the first time Weston has challenged one of West Vancouver's decisions, the MP chastised council for passing a motion based on assumptions rather than science.

"I wanted to caution everybody that the jurisdiction in Squamish is not ours to comment on," she said.

LNG is an alternative to coal that will bring economic growth to British Columbia, according to Weston. "If we are to pay for our teachers, our medical services, or welfare. .. we do need some level of economic growth," he wrote.

Council's decision was rooted in legitimate concerns and strong community sentiment, according to Coun. Michael Lewis.

While he is not adverse to more information, Lewis said bringing the topic back to chambers does not undercut council's previous motion.

"If anything, I think it will validate and re-enforce our resolve," he said.

The recent tailings pond dam breach near Quesnel that resulted in billions of litres of mining wastewater seeping into waterways underscores the importance of strong environmental stewardship, according to Lewis.

"How much traffic can you put in Howe Sound?" he asked. "Virtually every designated mooring spot for container traffic is full every night."

Panz also voiced reservations about LNG tankers in Howe Sound, mainly due to concerns about conflicts with recreational boaters and the navigational risk inherent in a long, inland waterway.