The kids plunged into the dirt and dug for worms. And just what were those Westcot elementary students doing? Rocket science.
Dec 22, 2016 3:49 PM By: Jeremy Shepherd 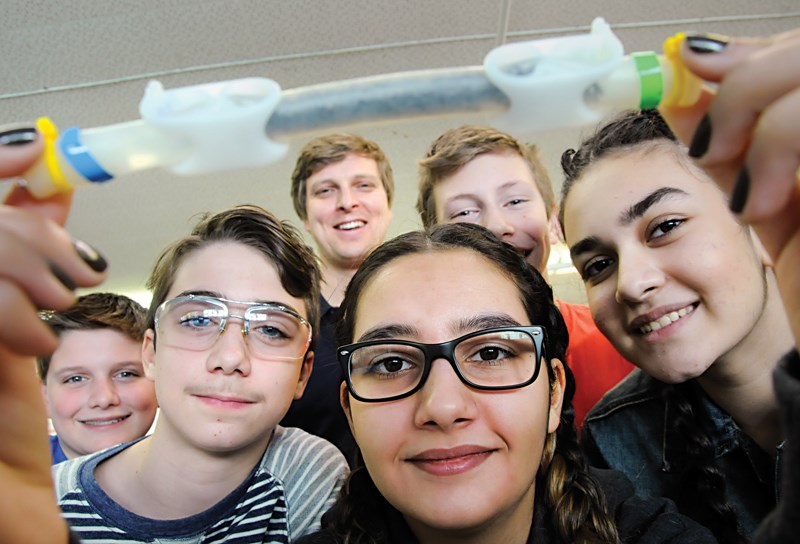 The kids plunged into the dirt and dug for worms. And just what were those Westcot elementary students doing?

Grade 7 and 8 students Kristopher Kirkwood, Griffin Edward, Shania Farbehi, Vesal Farahi, and Joseph Piovesan are now nearing the culmination of an experiment that will take their science experiment from the soil to the stars.

The students  – four of whom have since graduated from Westcot to high school – are planning to send the world’s most expensive worm cocoon into orbit early in 2017 in an effort to discover if worms can grow in zero gravity.

The project is one of 21 student experiments selected to blast off from over 2,400 proposals created by students throughout North America.

Westcot’s vice-principal Matt Trask worked with the National Center for Earth and Science Education to bring the space experiment program – designed to foster interest in science, technology, engineering and math – to the West Vancouver school district.

After the school district solicited ideas for the project from budding young scientists throughout West Vancouver, the Westcot group first considered a Ziggy Stardust-like spider experiment. It was at that point Trask asked a critical question: “Why?”

“It’d be cool but you don’t get funded because you have a cool idea,” he reminded them.

Worms were initially mentioned a joke but the idea truly hatched when the group considered compost toilets and the role worms play in growing food.

In 2015, NASA reported the International Space Station had been successfully transformed into a salad bar, allowing astronauts to snack on red romaine lettuce grown under blue and red panel lights in space.

“If they can make the dirt from the worms eating their waste, then they wouldn’t need to keep bringing food up,” Kirkwood said. “They’d be able to go for longer because they have a continuous supply of dirt.”

Out of 100 submissions received from students across the West Vancouver School District, three were chosen by a selection committee from the science education program. With a spot on the International Space Station on the line, NASA engineers picked Westcot’s worms.

The cost of sending their cocoons into space in a tube is $25,000. “You can imagine what it costs to ship food,” Trask said.

The cocoon is scheduled to launch on a SpaceX Dragon rocket Jan. 21 and be on a space station for between four and six months. Astronauts will run the experiment and the team is set to review the results. The project took the better part of a year and included a trip to present their project to NASA engineers at the Smithsonian in Washington, D.C.

But when asked about her favourite element of the experiment, Farahi recalled that day in the dirt. “The part I really liked was trying to find worm cocoons,” she says, eliciting laughter from her teammates.

Because of its unique nature, studying the growth of worms in zero gravity presented its own challenges.

“The hardest part was probably the research because there wasn’t much on the Internet,” Farbehi said.

“I even went to Page 2 on the Google search, so you know how serious I am,” Edward added.

Their work was funded by Boeing and Magellan Aerospace, vetted by NASA engineers and approved for blastoff shortly before Christmas.

Transport will be handled by NanoRacks, which is “like FedEx for space,” Kirkwood said.

The experiment required an enormous amount of work, Edward said.

While the assignment began as science, language arts became critical in the researching and writing of the proposal.

“At least 10 Shakespeares worth of writing,” said Edward.

“And then it turned into math,” Piovesan added.

Piovesan and Edward said that while some student science groups didn’t want to be together, their quintet embraced the spirit of collaboration. Asked about moving forward in science, Edward spoke up first.

“If we’re able to collaborate once again, maybe we could do something even bigger.”