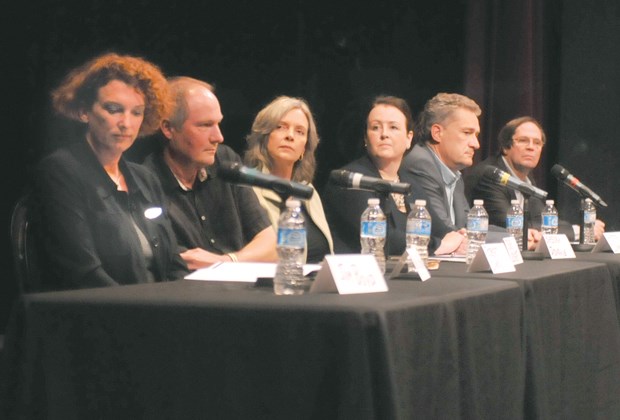 The West Vancouver school board's role in repairing the combative relationship between the province and the B.C. Teachers' Federation was one of several issues discussed at the trustees' debate Oct. 15 at Kay Meek Centre.

Eight candidates made their pitch to oversee education as part of the West Vancouver Board of Education, which faces three vacancies as trustees Reema Faris, Jane Kellett and chairwoman Cindy Dekker will not seek reelection.

A labour dispute centring on class size and composition resulted in a delayed and abbreviated school year.

Future disputes between the province and the BCTF could be alleviated by a common set of numbers, according to incumbent Carolyn Broady. "One of the biggest issues has been the BCT F and the B.C. government have completely different sets of data that they're working from," Broady said.

Kay Meek vice-chairman Pieter Dorsman suggested a "radical overhaul of labour relations" is needed to divorce political conflict from education. "As a Dutchman, I'm from a country where we build consensus," he said.

Dorsman suggested the current bargaining structure could be reformed under the guidance of a royal commission.

The rift between the province and the BCTF could be aided through the school board’s advocacy for classroom support, according to former District Parent Advisory Council president Sheelah Donahue.

“I think that will go a long way to repairing that relationship with the BCTF,” Donahue said.

On a per student basis, private schools receive as much as 50 per cent of the funding that goes to public schools.

That figure should likely be reduced, according to incumbent

David Stevenson. "I'm not sure that it benefits public education to have such a large amount of the budget go into the private sector," he said.

International students have been a financial boon to West Vancouver, with approximately 600 young scholars paying $14,200 in annual tuition. However, the school board may be overly reliant on overseas learners, according to Jim Boyd, who pointed to the need to find new sources of revenue.

"The final resort would be to cut costs if the revenue went down," he said.

With many nations facing imperiled economies, the onus is on West Vancouver to look for other funding sources, agreed community volunteer Rob Inman.

Students from other countries and districts studying in West Vancouver aid the district, according to Donahue.

"We have a structural deficit in this district and we need to make up that deficit."

Parents should have the option of putting their children in alternative, public or private school, according to Brown. "I don't think we should be eliminating choice for parents. I'm pro-choice for parents," she said.

The school board might benefit from greater autonomy in terms of allowing the superintendent, teachers and administrators to decide on class size, according to Inman.

The debate, which was moderated by a representative from West Vancouver Citizens for Good Government, touched on the intersection of education and technology.

West Vancouver schools need funding for their sporadically effective wireless service, according to Inman. "The Internet hardly ever works. The

Cutting-edge technology is largely ineffective without trained teachers, according to Brown.

"You can have all the computers in the classroom you want but it's not going to be authentic learning. .. if the teachers don't have the support to bring it into the classroom," she said.

Technology is increasingly prevalent, but Irene Leschert said the lessons her motherin-law taught in a oneroom schoolhouse remain relevant.

"There's things that she taught those kids that all our kids need to hear: that they are valued."