With two wheels and one leg, amputee trains toward dream of desert motorcycle race
Oct 26, 2014 12:00 AM By: Jeremy Shepherd 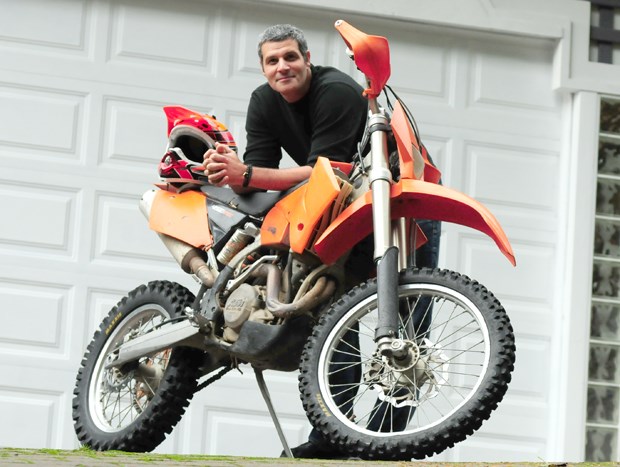 The motorcycle sputtered and fell.

On a twisting trail in Squamish, Erez Avramov was pinned under his KTM 450 motorbike.

A recent amputee, Avramov had to take off his prosthetic leg, manoeuvre to his feet and prop up the bike. For some riders, that would be dispiriting.

Avramov got back on and rode.

"For a few minutes, I forgot about my leg," he says, tones of awe creeping into his voice at the memory of winding through the trails with his heartbeat in his ears.

It was a ride that rekindled his decades-long dream to compete in the world's most gruelling motorcycle race: the Dakar Rally.

It was also the first time Avramov had successfully ridden a bike since a life changing collision.

It was drizzling in Vancouver, but the highway's steep climes took the Israel-born West Vancouver father through hail and a snowstorm.

"I just hit a patch of black ice and my truck lost control."

He spun, hitting the median at an odd angle that accelerated the spin until his truck flipped, landing in the oncoming lane.

"I just saw the lights of this fully-loaded semitruck come in and, there was nothing much to do," Avramov says. "There was an interesting feeling at that point. I knew I wasn't going to die."

Paramedics didn't think they could pull a living body out of Avramov's smashed Toyota 4Runner - but the vehicle might have saved his life. "I was fortunate. Apparently being upside down had a lot to do with it," he says.

The engine block and front axle took the brunt of the impact from the semi's taller bumper.

"If I was on four wheels I probably wouldn't be here today."

He spent the next three days in an induced coma.

The femur in his right leg was in pieces and his right ankle was shattered.

Three surgeons wanted to amputate the leg above the knee. One doctor dissented. "One surgeon said, 'Let's put him together. We have all the pieces,'" Avramov says.

With his femur and knee at about 70 per cent today, Avramov is grateful democracy didn't prevail in the operating room.

Most of his injuries healed quickly, but his ankle didn't.

He underwent half a dozen surgeries but couldn't walk longer than 20 minutes. Compensating for his limp also ended up hurting his hip and knee on the good side.

Avramov's girlfriend, who is his wife today, helped him through rehabilitation.

"Without her support I don't know that I would've got through," he says.

A year after the accident, Avramov realized there was no medical means to repair his ankle. His talus bone, which is part of the ankle joint, had died due to insufficient blood supply.

"It was just a matter of time until the whole ankle would collapse," Avramov says.

For the first time, Avramov began to think seriously about amputation.

He got second, third and fourth opinions, but the medical community was divided.

"Two agreed with my decision and two actually said that I'm completely insane. One of them almost attacked me," he says, laughing.

After 18 months of study and training, which Avramov likens to a PhD in amputation preparation, he got the surgery.

A few months later, Avramov was on a motorbike.

"I mainly love motorcycles for the ability. .. to reach places you just can't reach any other way," he says. "It's just a different experience of the world when you're on a motorcycle."

He took the bike to Squamish and tried to ride.

"I was standing there and I thought, this is pathetic, I can't even kickstart the bike."

He needed to stand on a rock to trigger the bike, but when he got started he almost wished he hadn't.

He couldn't control the bike or use the rear brake.

"After 20 minutes my head just took me to very dark places," he says.

Driving back to his British Properties home, Avramov felt something had been taken from him.

He didn't sleep that night.

Avramov was determined: there had to be a way to ride. He found a way to customize the bike to compensate for his limitations.

"The rear brake? Yes, I can't operate it safely. So what did I do? I bought the Rekluse system that transfers the pedal from the leg up to the handlebar."

He uses his left leg to shift gears. Avramov also uses pivoting foot pegs to make up for lost mobility.

After customizing the bike he headed back to Squamish, looking for a gnarly trail.

"After three or four minutes, I said, 'Wow, this setup is not bad,'" he says.

For the first time since his surgery he was riding and for a little while, he forgot about his leg.

The Dakar is a desert endurance race taking riders on a route that snakes through Argentina, Bolivia and Chile.

More than 20 competitors have died in the rally raid since its inception in 1978.

Even after his collision on the Coquihalla, the race has never been far from Avramov's thoughts.

"The day of the accident. .. I think the first thought was: That's it. I always wanted to do Dakar and look what happened. Now you can't do it, not because you don't want to - because you just can't do it."

But with a new leg, slashing between desert dunes in 2016 was a viable possibility.

His friends and family kept asking him why he couldn't be normal and stay out of harm's way.

"We have a limited time here," he explains. "We don't really know when we're out and when you have these big dreams and big passions, you just go for them."

In preparation for crossing 10,000 kilometres in 15 days, Avramov has been seeking sponsors while undergoing a rigorous training regimen and searching for the perfect prosthetic.

"Fitting a prosthesis is half an art, half a science," he says. "It has to fit perfectly, otherwise you're in pain."

"We haven't found the perfect solution," he says. "Yet."

Avramov says he never would have braved the Dakar if not for the accident.

In the years before the highway crash Avramov found very little satisfaction in adrenaline sports.

"As soon as I was off the bike or the bicycle or the mountain I was back to life," he says laughing. "The issue is you, not what you do.

"At that point, even Dakar lost its luster for me because I wanted to do it from an egoistic place."

Today, he sees the race as a mission.

"It is my duty to share everything that I've learned in my journey."

Recently, he's been approached by people dealing with hardships and who have been inspired by his story to change their lives. "I see how powerful it is and I just can't turn my back," he says of Dakar. "It's something I need to do."