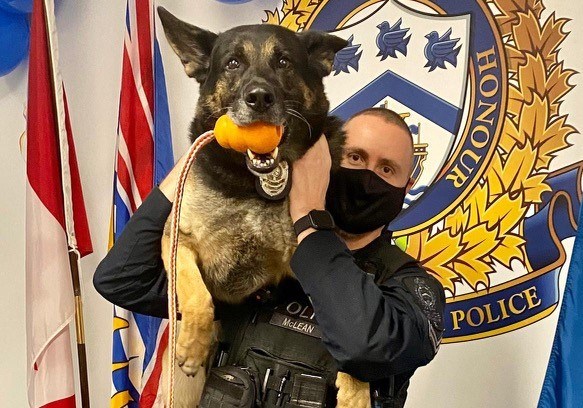 Ranger, a very, very good boy, has just retired after a long stint as a police service dog for West Vancouver Police Department.

The eight-year-old German Shepherd, born on May 20, 2012, in Germany, spent his days sniffing out crooks with his partner Cpl. Mark McLean. Ranger and Cpl. McLean have served the West Vancouver community for seven years and have assisted with several criminal apprehensions.

“Ranger has been an invaluable member of this department for the last seven years, and he will be missed,” said Const. Kevin Goodmurphy in a release.

“He now deserves a new life of chasing chew toys instead of bad guys.”

Wishing PSD Ranger all the best after his recent retirement! Thank you for serving this community for 7 years. https://t.co/OLjfrfSsXH pic.twitter.com/3XbFQp75nk

Members of the canine section are trained in a variety of disciplines such as tracking, criminal apprehension, and evidence recovery. WVPD dogs live with their handlers as part of their family. They continue working as long as they are able, or until their handler is transferred or promoted to another section.