West Vancouver council has given its OK to a new mixed-use condominium and commercial building at the gateway to Ambleside.
Sep 23, 2017 11:12 AM By: Brent Richter 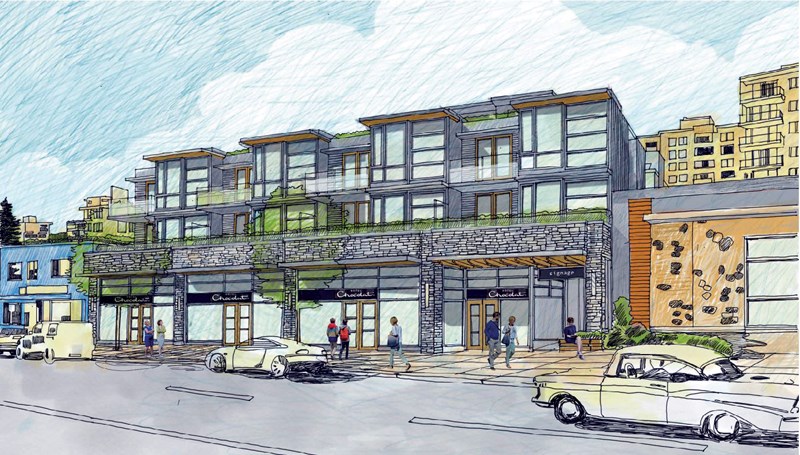 West Vancouver council has given its OK to a new mixed-use condominium and commercial building at the gateway to Ambleside.

Council voted Monday night to grant a development permit for a three-storey, mixed-use building that has 5,100 square feet of commercial space at street level and 16 residential units on the top two storeys, as well as 38 underground parking spaces.

It’s the second time the project at 1327 Marine Dr. has been before council in recent months.

Council was generally supportive of the project when it came up for a vote in July, but at the time, the proposal included rooftop patios and “pop-up” stairs, which were a sore point for neighbours.

In response, the developer eliminated the patios and pop-ups, but also stripped out the LEED gold environmental design, green roofs and a contribution of public art.

The developer did not need to apply to rezone the property or get an official community plan amendment as the proposal was already compliant with both.

The motion to grant the development permit passed unanimously but not before a voracious debate by council.

Couns. Peter Lambur, Christine Cassidy and Bill Soprovich all praised the developer for being so responsive to the wishes of the area residents who turned out to complain.

“You didn’t get what you wanted but you gained a lot of friends. There’s no question.

“To backtrack a little bit, I think you did yourself well in this community,” Soprovich said.

But the sentiment wasn’t shared by Coun. Nora Gambioli, who said she was deeply disappointed the public art, LEED gold environmental standards and green roofs, which she argued are in the interests of the entire community at large, were eliminated to satisfy the needs of a small group of neighbours.

“That is what we need and that is what we in this community want. If the free market will not build what we need, then government – in other words, us – needs to legislate what they can build and we need to do it soon,” she said.

She also reminded council, there is no such thing as a right to a view.

“If everyone in West Vancouver had the right to a view, we wouldn’t have a single tree left in this community,” she said.

The property has been vacant since a 2012 arson fire destroyed nine businesses at the site.