While protests about B.C. Ferries service cuts have recently focused on smaller routes, merchants in West Vancouver's Horseshoe Bay village say they're worried about changes that could hit major routes to Vancouver Island next.
Mar 16, 2014 12:00 AM By: Jane Seyd 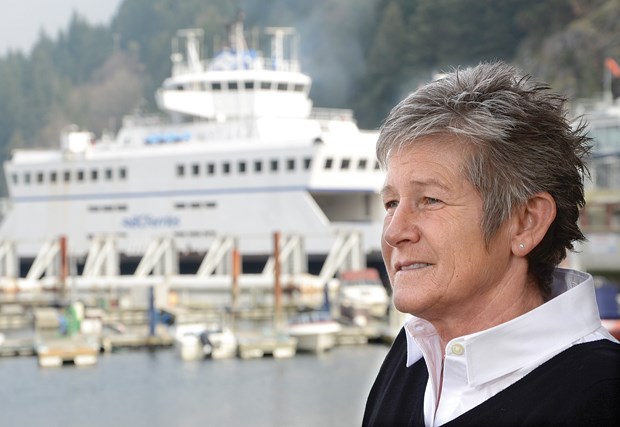 While protests about B.C. Ferries service cuts have recently focused on smaller routes, merchants in West Vancouver's Horseshoe Bay village say they're worried about changes that could hit major routes to Vancouver Island next.

Among the feared changes is the possibility of taking ferry traffic away from the Horseshoe Bay to Departure Bay route and sending it through the Tsawwassen ferry terminal to Duke Point instead.

"We have a great level of fear here," said Holly Kemp, manager of Troll's restaurant in Horseshoe Bay and president of the Horseshoe Bay Business Association.

"About 70 per cent of my business is from ferry traffic," said Kemp. "It would kill Horseshoe Bay as a village. There would be few of us left standing."

While no official word has been floated yet on what might be considered for major ferry routes, Kemp said she was given a heads up by West Vancouver Sea-to-Sky MLA Jordan Sturdy that big changes for Horseshoe Bay ferry traffic could be on the agenda in future. Sturdy has a constituency office in Horseshoe Bay and is parliamentary secretary to Transportation Minister Todd Stone, who has presided over recent ferry cutbacks.

Kemp said Sturdy asked her at a community function, "What would I think if the Nanaimo ferry was no longer running out of Horseshoe Bay?" Kemp said Sturdy told her the idea has come up as a possible way for B.C. Ferries to avoid paying huge capital costs of $250 million for seismic upgrades at the Horseshoe Bay ferry terminal in the future.

Now, "everybody is aware of this as a looming threat," she said.

Deborah Marshall, spokeswoman for B.C. Ferries, said it's premature to talk about any changes being contemplated for the Nanaimo to Horseshoe Bay ferry route.

But she acknowledged projected capital costs for the Horseshoe Bay terminal may eventually be part of the debate.

Because of limited space, the Horseshoe Bay terminal is the only one that has a two-tiered marshalling area for traffic.

Last fall, the ferry corporation completed $2.2 million in seismic work on the upper deck at the Horseshoe Bay terminal, which should delay more costly upgrades for at least five years, said Marshall. But "it will eventually come to the end of its useful life. Then we do have to contemplate a large capital investment at Horseshoe Bay and we will be turning our attention to basically assessing the needs for the three major routes," she said.

The Langdale and Bowen Island ferries - which serve nearby local communities - carry another 1.5 million vehicles and 3.6 million passengers through the Horseshoe Bay terminal.

The Tsawwassen to Duke Point ferry carries much less traffic - about 600,000 vehicles and 1.4 million passengers a year. About 13.5 per cent of the traffic on the Duke Point route is commercial truck traffic, compared to 2.4 per cent on the Horseshoe Bay to Departure Bay route. Unlike the other routes to Vancouver Island, the Tsawwassen to Duke Point route is currently a money loser for B.C. Ferries, costing between $24 million and $30 million a year.

Marshall said B.C. Ferries must cut $4.9 million from the major routes - which include the three routes to Vancouver Island - within the next two years.

"In reality we probably need two and a half to two and three-quarters (routes) to service the volume of traffic," she said. "It's something we're going to have to rationalize."

Sturdy said consideration of large capital costs have to be part of the discussion about the ferry system. "The seismic upgrade of the upper deck (at Horseshoe Bay) and the quarter billion dollars associated with it is a significant expenditure."

Sturdy said the question has to be asked, "Are there other ways to deal with it?" One way to avoid paying for that upgrade would be to remove the upper terminal level in Horseshoe Bay, which would limit the number of cars that could be marshaled within the terminal, he said.

Sturdy said both B.C. Ferries and the province will have to look at the most cost-effective way to handle traffic to Vancouver Island over the next two years.

"Everything is on the table, yes," he said. "What those outcomes are going to be I can't say."

West Vancouver Mayor Mike Smith said no one from the province or B.C. Ferries has raised the issue of taking some or all of the Nanaimo ferry traffic away from Horseshoe Bay with him.

"The Horseshoe Bay route is one of the profitable ones," he said. "...I don't know why they'd be making any changes to that route."

"Obviously it would have an impact on Horseshoe

Bay if they were to take the Nanaimo ferry service out of Horseshoe Bay," said Smith. "There's an awful lot of ferry traffic that shops in Horseshoe Bay."

Kemp said the issue is one local merchants are keeping a close eye on since her discussion with Sturdy. "He's raising a red flag that says 'beware,' " she said.

Businesses intend to fight back if the idea of taking traffic away from Horseshoe Bay starts holding water, she added. "I think he's fishing to see what kind of response he's going to get and he's hooked on to a shark. It's not going to be pretty."