Students at West Vancouver’s Ecole Pauline Johnson had a recent lesson that was out of this world. Students gathered in the school gym Oct.
Oct 14, 2018 3:10 PM By: Jane Seyd 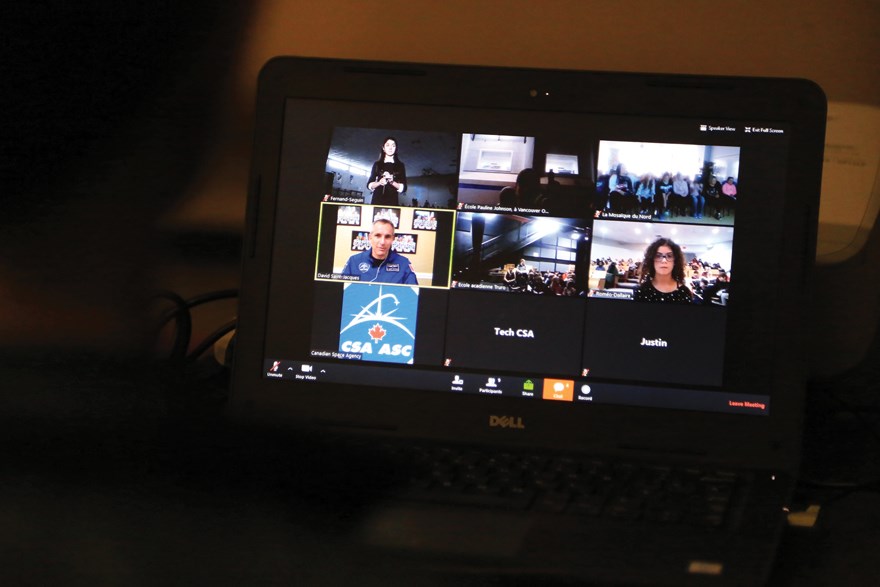 Students at West Vancouver’s Ecole Pauline Johnson had a recent lesson that was out of this world.

Students gathered in the school gym Oct. 4 before the usual morning bell to take part in a special conversation – a Skype video call with Canadian astronaut David Saint-Jacques, from his training centre in Russia.

Fittingly for a French Immersion school, the conversation took place entirely in French.

Kids at Pauline Johnson were among five schools across Canada – and the only one in Western Canada – to take part in the call.

Among the questions posed by the West Vancouver students: What has been the most challenging part of the training? How do astronauts eat and sleep in space? And do you ever think we’ll find extra-terrestrial life beyond Earth?

“I think a lot of kids were really excited,” said Craig Elliot, the Grade 6 and 7 teacher responsible for setting up the call.

Elliot said he got the idea last year while looking for French-language resources to use while students studied outer space.

Canadian Space Agency astronaut Saint-Jacques, who is from Québec, is currently training to fly to the International Space Station on his first mission aboard a Russian Soyuz capsule.

Saint-Jacques had been scheduled to launch Dec. 20. So far, it’s not clear whether the failure of a Russian rocket during a launch Thursday from the Russia-leased Baikonur cosmodrome in Kazakhstan will change or delay that plan, after a U.S. and Russian astronaut were forced to make an emergency landing in Kazakhstan.

Saint-Jacques is trained as both an engineer and a doctor. If his mission goes ahead, Saint-Jacques will be the first Canadian aboard the space station since Chris Hadfield spent five months on it in 2012 and 2013.

Saint-Jacques is scheduled to conduct a series of scientific experiments from the space station including robotics tasks and testing new technologies, according to the space agency.

Among the advice Saint-Jacques handed out to kids looking to blast off into a similar career: take maths, sciences and engineering, and “learn as many languages as you can.”

Kids learned about the joys of a dehydrated diet while in orbit as well as pondering larger philosophical questions like the search for intelligent life, during the 30-minute call.

The astronaut told kids he doesn’t doubt there is some form of life out there, said Elliot, but added, “the universe is so immense” that even if it’s out there, humans may not find it.

Elliot said the Francophone video chat was great for showing kids “how French is going to be able to serve them. It’s not just a language we’re learning in the classroom for academic purposes.”

He hopes students interested in pursuing robotics will also be inspired by the conversation, even if they have no intentions of leaving Earth’s atmosphere.