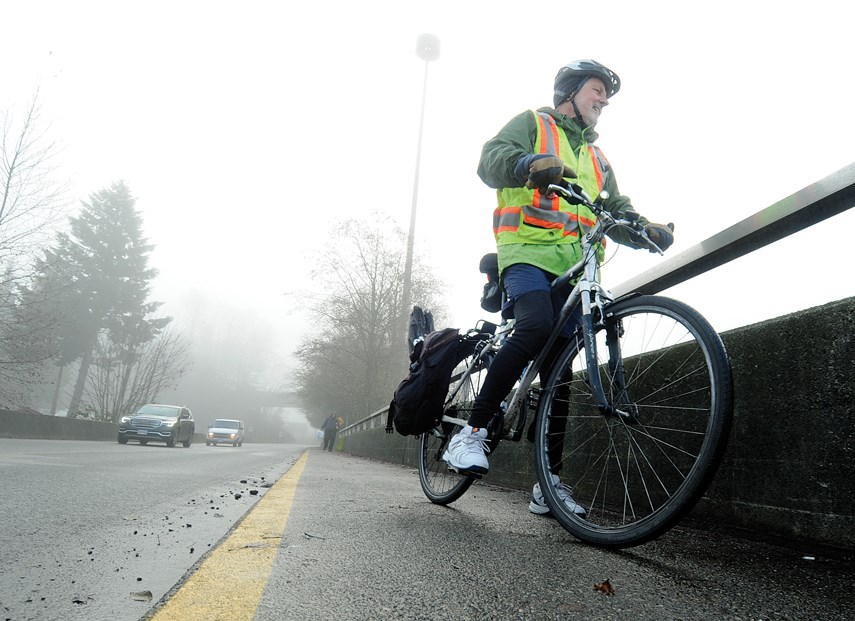 If all goes well, cyclists, pedestrians and drivers will have peace on Wardance Bridge next summer.

In a 6-1 vote, West Vancouver council opted to spend $700,000 to reconfigure the bridge Monday, making the sidewalk wider and the lanes narrower in the hopes of allowing safer passage for cyclists.

Spanning Capilano River, Wardance Bridge connects Park Royal to North Vancouver through Squamish Nation land. The arrangement creates logistical and ethical quandaries, according to Coun. Christine Cassidy, who sounded the one note of dissent on the project.

“As much as I want to vote for this – and I truly do, because I truly do want our citizens to live – I, in all sincerity, with (my) fiduciary responsibility to this community, I can’t do it,” she said.

Cassidy’s consternation stemmed in part from Park Royal’s ownership of the bridge.

Those concerns were addressed in a district staff report written by engineering and transportation director Raymond Fung.

“The use of any district funds for this project is problematic,” Fung wrote.

The Community Charter forbids municipalities from assisting a business. Fung’s report proposed a partnering agreement that would essentially have Park Royal working “on behalf of the municipality.”

Cassidy suggested the Spirit Trail will likely be highlighted as a benefit to residents of the forthcoming Park Royal towers.

“They are decidedly behind the 8-ball as far as upgrading this bridge is concerned,” she said.

Cassidy added that Wardance Bridge, built in 1976, is a depreciating asset that may be on its last legs.

While Park Royal’s ownership was a bug for Cassidy, it was a feature for Coun. Mary-Ann Booth.

“It’s good to cultivate relationships with people who have bridges,” she said.

West Vancouver will pay for their share of the bridge improvements through unallocated community amenity contributions – a situation that did not sit well with Cassidy.

Community amenity contributions are paid to the district by developers in exchange for extra density or height. Cassidy suggested spending that money on the bridge did a disservice to residents living with extra density.

Mayor Michael Smith disagreed, suggesting the CACs came from the Evelyn Drive project, which is a “nine-iron away.”

Smith thanked Park Royal for chipping in $700,000 on the bridge improvements.

“If we really do have a community that we all want to live in, we have to accept goodwill,” he said.

While the bridge was “never designed for cyclists,” Park Royal will work with the structure of the bridge to make Wardance safer, according to Park Royal vice-president Rick Amantea.

“We are not in this to try to make money, we’re in this to do what’s right for the community,” Amantea told council.

Park Royal also plans to provide an extra lane at Taylor Way and Wardance Bridge for northbound cars turning right. Other upgrades could include a raised crosswalk or new pavement markings paid for by Park Royal.

“It could be framed that the district’s cost contribution of $700,000 would leverage an investment of over $1.2 million by Park Royal,” Fung stated.

Those expenditures are crucial, according to Peter Scholefield, the vice-chair of cycling advocacy group HUB North Shore.

The narrow sidewalks and the inconsistency between the road signs and pavement markings have made Wardance Bridge the district’s “most dangerous roadway,” he said.

While signs on either end of the bridge signal that cyclists and drivers should form a single file, the markings on the pavement shuffle cyclists to the side of the bridge, Scholefield said.

“I myself must confess to using the sidewalk, but only when there’s no pedestrians,” he said.

The 90-degree turn at the eastern end of the bridge is “waiting for an accident to happen,” according to Coun. Bill Soprovich. The long-serving councillor also noted that the 20-kilometre speed limit signs almost never work.

“Unless we do something about it we’re going to see some accidents there.”

His position was echoed by Coun. Craig Cameron, who called it “truly a frightening experience” to cycle across the bridge with young children.

While commuter cyclists often take their lives in their own handlebars, “the Spirit Trail is meant to be for all ages and all abilities,” Cameron emphasized.

“It would be nice if Park Royal came and improved the bridge all on their own dime,” he said. “But the point is we’re 10 years in, we’re five years since this cantilevered option was explored and nothing has happened.”

The plan to attach a cycling/pedestrian path to the bridge was scrapped after an analysis revealed the addition would put too much pressure on the bridge. Plans for a stand-alone bridge in 2009 were also waylaid due to a potentially “protracted and extensive” permitting process involving the Squamish Nation as well as the now-dissolved federal agency Indigenous and Northern Affairs Canada.

Construction is tentatively scheduled to begin in the spring of 2018.