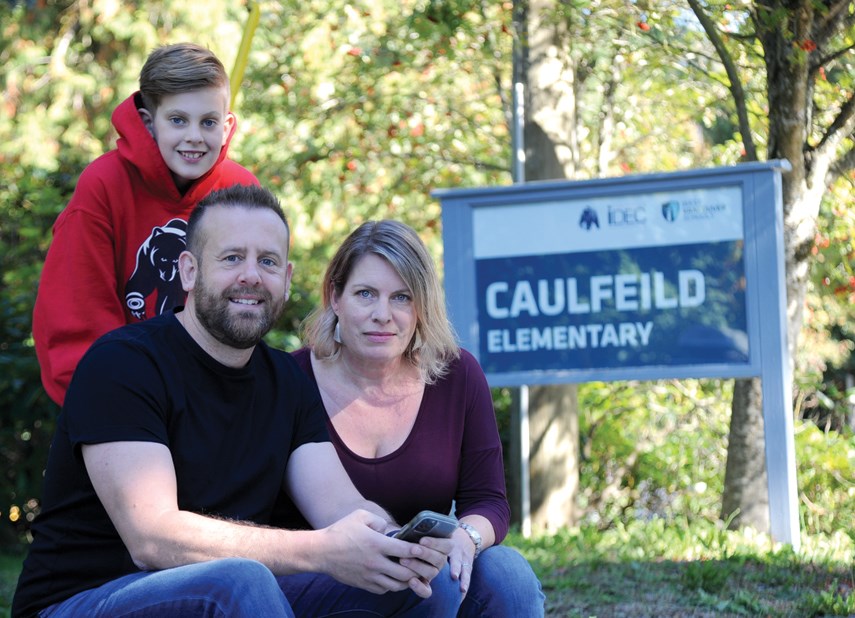 As the number of school kids being told to self-isolate over possible COVID-19 exposure grows in West Vancouver, parents are questioning why they aren’t getting timely information they say they need from health authorities.

Some say they worry that contact tracing isn’t reaching everyone it should, possibly putting other groups of students and their families at risk.

On Monday, Dr. Bonnie Henry said all health authorities will publicly identify schools where someone who tests positive for COVID-19 has been in school during the time they could have transmitted the virus.

But parents say without knowing which cohort or class is impacted it’s difficult for them to know if their kids are at greater risk.

“Are you hoping a 7-year old remembers everyone they were in contact with or played with on the playground?” said Coralynn Gehl, a West Vancouver mom whose son attends Caulfeild Elementary, where two classes – a Grade 2 and Grade 5 class – are now self-isolating over possible COVID-19 exposures. “It doesn’t make sense.”

To help share information among parents about possible COVID-19 exposures more directly, Gehl recently turned a Facebook page she’d created into a forum where parents can do that.

Gehl said she recently expanded the group to include North Vancouver – although nobody has posted about any school cases there yet – and has been hearing from parents across the North Shore eager to get more information.

Her group North Shore COVID19 Information has tripled in size in the past two days, she said.

Many parents feel if a child or teacher in a class tests positive “the entire cohort should be notified immediately,” she said. “That to me was the whole point of having cohorts.”

But parents in West Vancouver say there have been delays of several days in being notified if a class might have been exposed.

Last week, Dr. Mark Lysyshyn, deputy chief health officer for Vancouver Coastal Health, said there’s a concern that listing too much information could lead to identifying students or staff who test positive and lead to blaming and stigma. That might make people reluctant to get tested, he said.

It could also result in parents deciding to keep their kids home from school when there’s no medical reason to do so, he said.

But parents say they aren’t buying that.

“We know what Vancouver Coastal Health is telling us,” said Gehl. “We just don’t agree with it.”

Parents have also voiced confusion about why they’re being told it’s ok for siblings of kids who are self-isolating to continue going to school.

“There are a lot of people who think that if someone is sent home to self isolate, all of their siblings should be sent home as well,” said Gehl.

One West Vancouver mom with a child in the Grade 2 Caulfeild class that is now isolating at home recently posted in the Facebook group that members of her family – including a teenager who attends Rockridge Secondary – recently tested positive for the virus, although their youngest child remains asymptomatic.

Another mom – Krista Peters – said she was worried enough about potentially spreading the virus to others to get her daughter – in the same Grade 2 class – tested, even though she had no symptoms and was advised not to by health authorities.

On Saturday, she got word her daughter had tested positive, said Peters.

“Now, that to me, just seems crazy, because how do you know when these kids are actually contagious, if they're asymptomatic the entire time? You just don't know.”

On Monday, Henry said which household contacts have to isolate will depend on whether others at their home have tested positive or not.

Henry said most people who get COVID-19 will only give it to one or two people. Even within families, not everyone in the home will necessarily get sick, she said.

Gehl said most parents she’s talked to think there should be more information being shared, especially in classes where there may have been exposures.

“Not enough is being done to protect students,” she said. “It feels like a little petri dish experiment that so far is not going well in West Vancouver.”