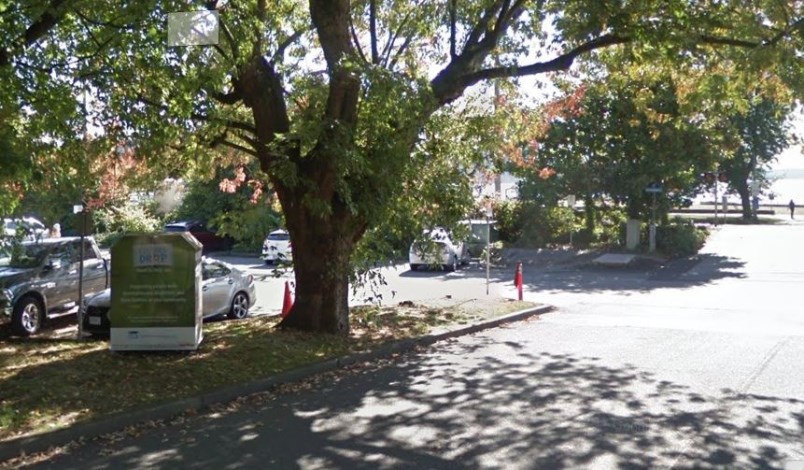 A screengrab from Google Maps shows the clothing donation bin in Ambleside Park where a man died in December 2018. | Google Maps

This story has been updated to include responses from all three North Shore municipalities.

The BC Coroners Service says the man who died while stuck in a West Vancouver clothing donation bin almost three years ago asphyxiated with his neck caught in the bin hatch’s closing mechanism.

The incident happened on Dec. 30, 2018, in Ambleside Park. The death prompted a national discussion about whether donation bins that pose a threat to human safety should be allowed to remain on city streets.

The first person to spot the man in the bin was an off-duty doctor who tried to pull him out but found the victim was totally stuck.

“An examination of [the victim] revealed deep impression markings on [his] neck consistent with the position [he] was found in. [He] had no other injuries or trauma. [He] was homeless and known for obtaining items from clothing donation bins,” coroner Cynthia Hogan stated in her report.

The man also suffered from substance use and mental health issues, the coroner added.

The name of the victim is not being released and any identifying information in the coroners’ report has been redacted. At the time, West Vancouver police said the victim was a 34-year-old Vancouver man.

“Based on the autopsy examination and the circumstances surrounding the death, it is reasonable to conclude that [the victim] attempted to reach into the clothing donation bin by inserting (his) upper body into the hatch of the clothing donation bin. The hatch then closed and compressed onto [his] neck. [The victim] was unable to extract [himself].”

Toxicology results showed concentrations of methamphetamine and fentanyl in the victim’s blood “in a range where fatalities have been reported.” As a result, Hogan concluded illicit drugs were a contributory factor.

“It is reasonable to conclude that [the victim’s] impaired state may have impeded his ability to self-rescue,” she wrote.

Soon after the accidental death, the District of West Vancouver ordered all clothing donation bins in the municipality to be locked and removed, at least temporarily. That has since been made permanent.

“I remember clearly the shock and sadness I felt at this terrible tragedy. West Vancouver acted quickly and decisively to remove all clothing donation bins from the municipality, and the bins’ owners all worked with us to get that done,” Mayor Mary-Ann Booth said. “I have heard that new bin designs are becoming available, but given what we know now, we would need clear proof that they are safe before we let them back into West Vancouver. A person lost his life in a horrible way, and that cannot happen again.”

Because there are no bins left in West Vancouver, Hogan said she would not be making any recommendations stemming from the death.

North Vancouver City Fire Department Chief Greg Schalk said the ones he is aware of in the city have been redesigned to be safer than the ones that were out prior to 2019.

The Ambleside death was the fifth case of a person who had died in a donation bin in B.C. In a statement, Union of B.C. Municipalities president Brian Frenkel said the organization did speak with the chief coroner about the matter last year and they would be “committed to sharing the findings of the report with our members once it was publicly available.”

At the time of the 2018 death, Vancouver’s Union Gospel Mission said every bin should be removed until they could be made safe.

“This is very sad. No matter how you cut it, this was a preventable loss of life and I think that's the real tragedy here,” said Nadia Tchoumi, communications manager at Union Gospel Mission.

Tchoumi said she appreciated that non-profits who rely on clothing donations to fund their charitable works had to find better options – either through redesigned bins or new ways of accepting donations.

“At the end of the day, this is about solutions that save lives,” she said.