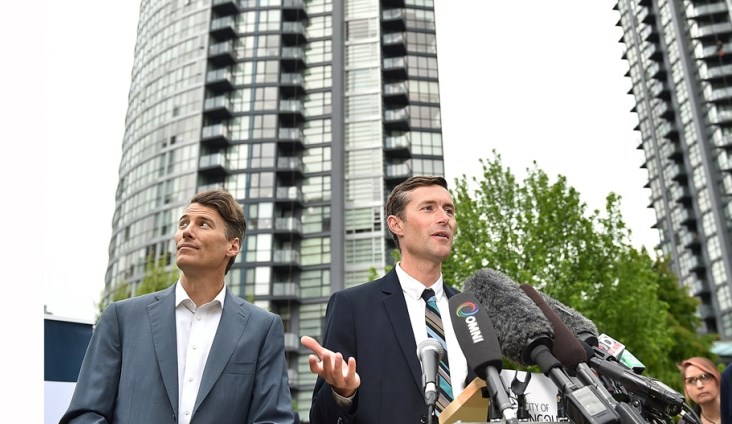 Luke Harrison, shown here at a May press conference with Vancouver mayor Gregor Robertson, announcing an agreement between the city and the Community Land Trust to build more than 1,000 affordable rental units throughout the cityDan Toulgoet

The City of Vancouver’s chief proponent for modular homes has parted ways with city hall to take an executive position with the very company contracted to build such homes.

Modular home company Horizon North Inc., which holds a $66 million contract with the city and BC Housing, announced Nov. 1 it was appointing Luke Harrison as its Vice President, Business Development.

In August 2017, Harrison and VAHA staff recommended to city council that Horizon be awarded the $66 million contract to build 600 modular homes for homeless and vulnerable people following a public procurement process.

His departure follows that of Vancouver’s head of real estate services Bill Aujla for Aquilini Development, which sparked much controversy in July, prompting then- mayoral candidate—and now mayor—Kennedy Stewart to call for new conflict of interest rules for both politicians and staff.

Stewart pledged to bring in a “cooling off” period of 12 months, preventing developers and contractors actively doing business with the city from hiring senior staff.

“When a senior bureaucrat leaves their city hall office on Monday to take a new role on Tuesday with a private firm that does business with the city it undermines the special position of trust with the public that senior staff have,” stated Stewart.

“Senior civil servants have valuable knowledge and relationships that can potentially create unfair and profitable advantage for their new private sector employers, simply because of the position they currently occupy with the city,” he added, in his election platform.

The city has a Code of Conduct to disclose potential conflicts of interest and handling of confidential information.

Kennedy pledged to reform conflict of interest bylaws within 100 days of office but did not respond to an interview request.

Harrison said he was aware of the political situation and so, “We did a check on the work I’ve been doing and will be doing with Horizon North with the legal group, and we’ve cleared all that.

“Everything we’ve done between the city, province and Horizon has been through a public procurement process,” said Harrison. “I understand the risks of perceived conflict but we’ve gone through all the steps,”.

Vancouver entered into the supply agreement with Horizon after Harrison and his staff assessed three proposals (Britco and Ladacor lost). Each 250-350 square-foot unit cost, on average, $110,000. To construct the 600 units, the city had to allocate 10-12 city-owned properties to be managed by VAHA, which is touted by the city as the largest developer of affordable housing.

But according to VAHA.ca, the agency has completed only seven affordable housing projects (346 units), all of which are for temporary modular housing contracted to Horizon. Two of three under construction projects are also associated with Horizon homes. VAHA claims 13 other projects, modular or otherwise, are in the permitting and rezoning process.

Harrison said the city will meet its 2021 goal.

“It does take a long time to develop affordable housing,” said Harrison noting the delays to get shovels in the ground was a result of not having building and operating partners.

“I think the goals were sound” and not political, said Harrison.

When the Horizon contract was signed the stated goal was to establish the 600 homes by the end of March 2018, subject to various factors including manufacturing and site feasibility.

Harrison’s replacement will become VAHA’s third CEO after Mukhtar Latif was fired in January, 2017, for undisclosed reasons. Harrison, who has a professional background in real estate development, was a senior planner with VAHA before replacing Latif.

It’s unclear if Horizon intends to continue applying for modular housing contracts with the city under the direction of Harrison, who again noted they would be done under an open Request for Proposal process.

“In his role, Luke will be responsible for growing the Modular Solutions portfolio with innovative developmental approaches specifically focused on government and not‐for‐profit social housing, including First Nations, senior, student and affordable housing initiatives,” noted a Horizon company statement.

In order to address a backlog of orders, the company recently acquired a facility in Aldergrove, complementing its Kamloops plant.

This year it acquired Shelter Modular Inc. and also completed a $14 million purchase of a 288 person camp south of Fort McMurray, Alta.

“From the National Housing Strategy to the funding commitments of the Government of British Columbia and BC Housing, the attention being paid to social housing in Canada is significant,” stated Horizon CEO Rod Graham.