The Ministry of Transportation and Infrastructure is taking its first-ever look at the long-term needs for Highway 1 from Lynn Valley Road to Horseshoe bay. The province has awarded a $110,000 contract to Parsons Inc.
Nov 12, 2019 3:20 PM By: Brent Richter 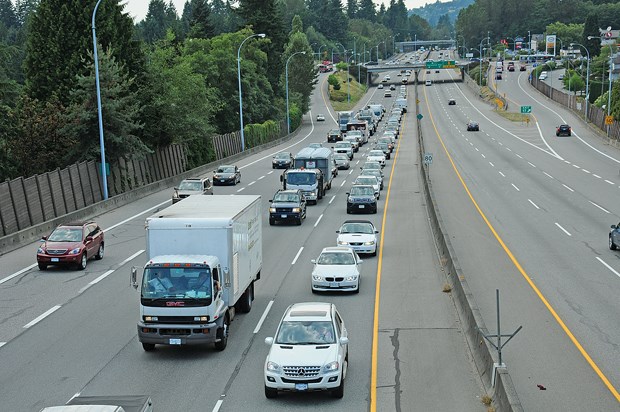 The Ministry of Transportation and Infrastructure is taking its first-ever look at the long-term needs for Highway 1 from Lynn Valley Road to Horseshoe bay.

The province has awarded a $110,000 contract to Parsons Inc. to study one of the busiest transportation corridors in the Lower Mainland and come up with recommendations for future improvements.

The interchanges from Lynn Valley to the Ironworkers are in the midst of $200 million in upgrades but the province hasn’t done any study whatsoever on what the long-term demands on the rest of the highway will be, said Bowinn Ma, North Vancouver-Lonsdale NDP MLA. For too long, Ma said, the province has planned transportation priorities on an ad-hoc basis.

“You will spend hundreds of millions dollars or billions of dollars on one area – maybe you upgrade one interchange, or you add one 10-lane bridge – where you deal with one congestion problem and it just moves the congestion somewhere else, and then you end up chasing the congestion. That’s not a good use of taxpayer money and it’s not good long-term planning either,” said Ma, who is also a civil engineer. “Transportation systems have to be treated as systems. It’s important that we have these long-term plans in place if we actually want to start to address the problem.”

Under the scope of the work, Parsons will assess how the highway is doing under current volumes as well as project demand up to 2050, including what local government priorities are and how a potential expansion of the B.C. Ferries terminal at Horseshoe Bay would funnel more cars onto the road.

“It is to see what kind of improvements give you the most benefit, and then go develop an implementation strategy,” Ma said.

Safety will also be a major component with the study taking into account collision data from ICBC “basically identifying which interchanges need the most help as quickly as possible,” Ma added.

Some of the potential improvements on the table include expanding the highway to add bus-only or HOV lanes, opportunities to expand active transportation routes or add new lanes of general traffic, although Ma isn’t holding her breath on that last one.

Ma said she expects to see the report completed by the summer of 2020.

Regardless of what improvements the study recommends, Ma may not be getting a lot of personal use out of them. She and her partner recently sold both of their gas-burning autos and replaced them with an electric car and an e-bike, which Ma now uses as her main conveyance.

Ma said she spends a lot of time talking about the importance of using active transportation to cut down on congestion and wanted to walk the walk, so to speak.

“I really wanted to be able to demonstrate that even I as an MLA who doesn’t just have one place to go to on her commute but multiple places every day can make this happen” she said. “I was pretty surprised because I looked into the numbers and that saves about 9.2 metric tonnes of GHGs, just from our tailpipes every year.”