The Brazilian exchange student who died in a snowboarding crash at Grouse Mountain Friday has been identified as 16-year-old Carson Graham student Luca Cesar. Cesar was snowboarding with friends around 7 p.m.
Nov 30, 2013 11:12 AM By: Brent Richter 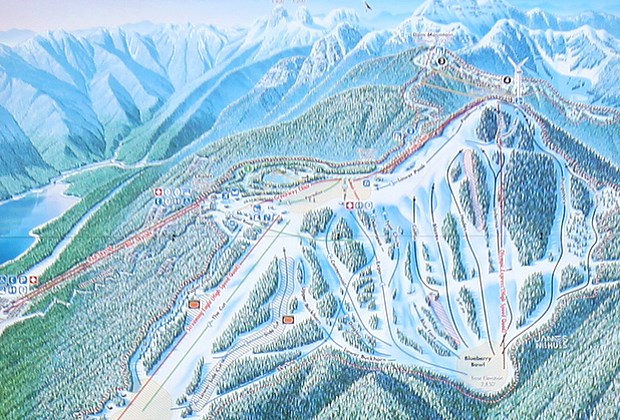 An exchange student died when he veered off the Heaven's Sake trail and crashed into a treed gully on Friday night at Grouse Mountain.image supplied, North Shore News

The Brazilian exchange student who died in a snowboarding crash at Grouse Mountain Friday has been identified as 16-year-old Carson Graham student Luca Cesar.
Cesar was snowboarding with friends around 7 p.m. Friday when he disappeared from the group somewhere on the Heaven’s Sake trail. His friends quickly alerted Grouse ski patrol staff who started a search of the mountain, but it wasn’t until after midnight that North Shore Rescue volunteers found the youth’s body at the bottom of a 30-foot ledge.
He had apparently lost his way in the thick fog and sleet, veered of the trail and collided with a tree, according to Tim Jones, North Shore Rescue team leader.
Cesar’s family in Brazil has been notified and the North Vancouver homestay family he was living with are now being assisted by North Vancouver RCMP victim services, according to police.
B.C. Coroners Service and the RCMP are continuing to investigate the death though foul play is not suspected. The teen was not wearing a helmet, which police say may have been a contributing factor in his death.
The North Vancouver school district has responded by making the district’s critical incident team and school counsellors available to Carson Graham and Sutherland secondary students, staff and families.
The district also set up a memorial table and condolence book at Carson Graham’s library, which will eventually be delivered to Cesar’s family.
“We are deeply shocked and saddened by this tragic accident. Our thoughts and sympathies are with the young man’s family at this time. Our staff is in close contact with the local homestay agency to understand the circumstances and provide their assistance in this sad situation,” said school superintendent John Lewis in an emailed statement.
Cesar is the second exchange student staying in North Vancouver to die while recreating on the North Shore. A 16-year-old Mexican exchange student died in July after falling down Granite Falls at the north end of Indian Arm, though in neither case were the students taking part in school-sanctioned activities. Outdoor activities are part of the North Shore lifestyle and exchange students do not need special permission to engage in them, the message from the school district indicated.