A Vancouver cyclist is dead after being struck by a driver on East Keith Road Sunday evening. North Vancouver RCMP say the man was headed east down the Keith Road hill around 5:45 p.m.
Jul 31, 2017 12:44 PM By: Brent Richter
Previous Next
1 / 1
Expand
Previous Next

A Vancouver cyclist is dead after being struck by a driver on East Keith Road Sunday evening.

North Vancouver RCMP say the man was headed east down the Keith Road hill around 5:45 p.m. Sunday when the driver of an oncoming Toyota Corolla turned left onto Shavington Street, into the path of victim.

“The cyclist ended up striking the vehicle on the passenger side,” said Staff Sgt. Dan Guilfoyle, North Vancouver RCMP spokesman.

City fire crews, who were first on the scene, attempted CPR on the man but he was declared dead at the scene.

The victim’s family has been notified and the RCMP have offered them the support of their victims’ services unit.

The driver, a 32-year-old North Vancouver resident, remained at the scene. The RCMP have called in the Integrated Collision Analysis and Reconstruction Service to submit a full report and do an inspection of the vehicle. The driver didn’t see the cyclist, Guilfoyle said.

“We, at this point, do not suspect alcohol or speed as factors in this collision and we are looking into the possibility of the driver’s vision being impacted by sunlight at the time of the collision,” he said.

The cyclist would have the right of way in that case, Guilfoyle said. But, he added, investigations like this take time to reach their conclusions.

“Any vehicle making a left-hand turn is required to yield to a vehicle or cyclist travelling down the roadway,” he said. “No charges have been laid at this point and the investigations are in their early stages. The big thing now is to gather statements from witnesses, other drivers who may have observed the collision take place. But it’s far too early at this point to determine what, if any, charges would be appropriate.”

Police will be canvassing the area for witnesses or possible surveillance video. Anyone who saw the crash should contact the RCMP’s non-emergency number 604-985-1311.

The cycling advocacy group HUB has been lobbying for safety improvements on Keith Road. If it’s true that the driver could not see the man on his bike, it could be a question of road design, said Tony Valente, HUB North Shore spokesman.

Even without a physically separated bike lane, a colour painted one might have helped, he suggested.

“Green paint is one of the things you’re seeing more and more and it really makes people attentive to bikes,” he said. “It’s another perfect example of why we do what we do to build better infrastructure and work with the municipalities to do that. It’s just not acceptable for anybody to have to lose their life going to work or going out for fun, either walking, riding their bike or in their car.”

A similar incident happened in West Vancouver on Saturday afternoon although that cyclist escaped with only minor injuries.

Police say a driver failed to use a turn signal when turning left from Chippendale Road onto Chairlift Road in the British Properties and drove into the path of an oncoming person on a bike. The driver was ticketed for failure to signal, according to police. 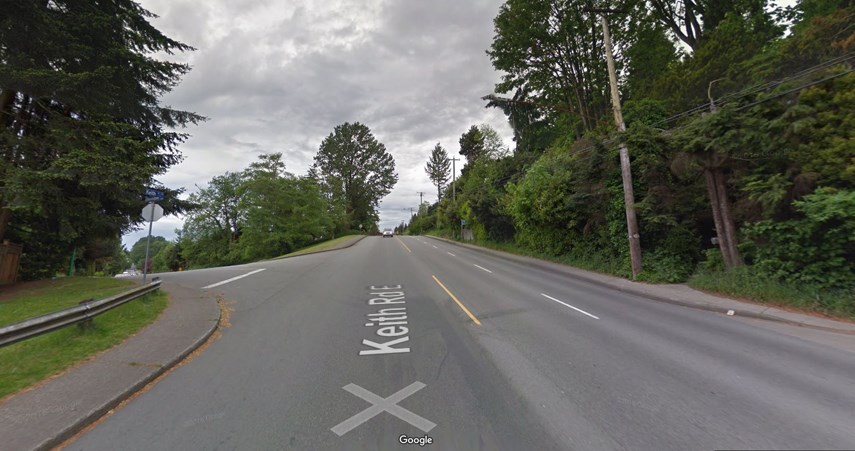