Put your phone away if you happen to notice vehicles emblazoned with the Uber logo around the North Shore this week – these cars aren’t for hailing. Starting Aug. 10, Uber unleashed 25 of its mapping vehicles across Metro Vancouver.
Aug 24, 2017 8:00 PM By: Ben Bengtson 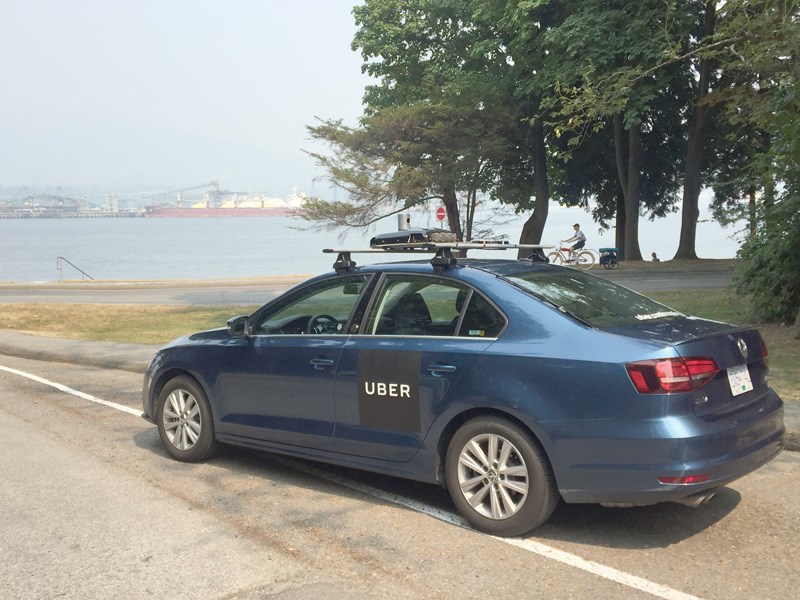 Put your phone away if you happen to notice vehicles emblazoned with the Uber logo around the North Shore this week – these cars aren’t for hailing.

Earlier this week, reports of the aforementioned vehicles hitting North Vancouver streets have been confirmed.

“It looks like the cars have been on the road in North Van,” stated Uber Canada spokeswoman Susie Heath in an email.

Although Heath couldn’t confirm the precise areas where the mapping vehicles have been roaming, people have reported seeing the vehicles in Lower Lonsdale, at busy intersections, and even residential neighbourhoods in North Vancouver.

According to a recent release from Uber, the ride-hailing company’s mapping program allows it to streamline its service with the most up-to-date information.

“Existing maps are a good starting point, but there are other things Uber needs to know a lot more about, like traffic patterns, building entrance locations, and precise pickup and drop-off locations,” the release reads.

Uber is a popular location-based mobile app that allows users to hire an on-demand driver who’ll pick a passenger up and drop them off at a location of their choosing. The mobile app – and the service it offers – has not yet been approved by the provincial government.

As the province takes a closer look at ride-sharing and ride-hailing services more generally, Uber is counting on the commitment of the B.C. NDP to push it through.

On Monday, B.C. Green party Leader Andrew Weaver said he planned to table legislature later this fall to help make ride-hailing a reality in the province.

Also on Monday, Transportation Minister Claire Trevena said in a statement that the province plans to take a “fair approach” as it ponders a ride-sharing solution that could be delivered by the end of the year.

Meanwhile, Uber is preparing for a future in B.C. as it continues to invest in its Metro Vancouver mapping program.

North Shore Taxi general manager Moonyem Mohammad said he doesn’t necessarily take issue with ride-hailing services if there’s a demand for them, but his hope would be they play by the rules.

Mohammad said he has seen Uber mapping vehicles parked on Lonsdale and elsewhere, but hadn’t noticed any driving around.

He added that the wishes of North Shore Taxi and the taxi industry as a whole regarding ride-hailing services, such as Uber, remain unchanged.

Namely, regulations when it comes to fare rates, driver safety and, perhaps most importantly, the safety of customers were noted as top priorities.

“A lot of discussion needs to take place prior to this ride-sharing and I hope and I pray that our provincial government and also our city municipal government listen to our concerns,” he said.

North Vancouver-Lonsdale NDP MLA Bowinn Ma said she was aware that Uber mapping vehicles had been on the roads in North Vancouver, but she hadn’t seen any herself.

Speaking as the MLA for her riding, Ma said when people in the community come to speak with her about issues affecting the community, ride-hailing or ride-sharing weren’t generally top of the list.

“Their primary concerns are affordable housing, it’s transportation in general – in particular, public transportation infrastructure, investments – and they’ve been concerned about child care,” she said. “All of those are the top three items that I’m currently working on.”

She said she wasn’t surprised that Uber was preparing for a future in B.C., but added “they should be prepared to play by the rules when the approach is released.”

“Convenience and cost effectiveness of any service is of course important to me, and I want that for our community,” she said. “But we need to make sure that we’re not achieving this off the backs of our neighbours.”