Note: This story has been updated to make a correction regarding the direction of the traffic line-up.
Aug 17, 2017 4:15 PM By: Brent Richter 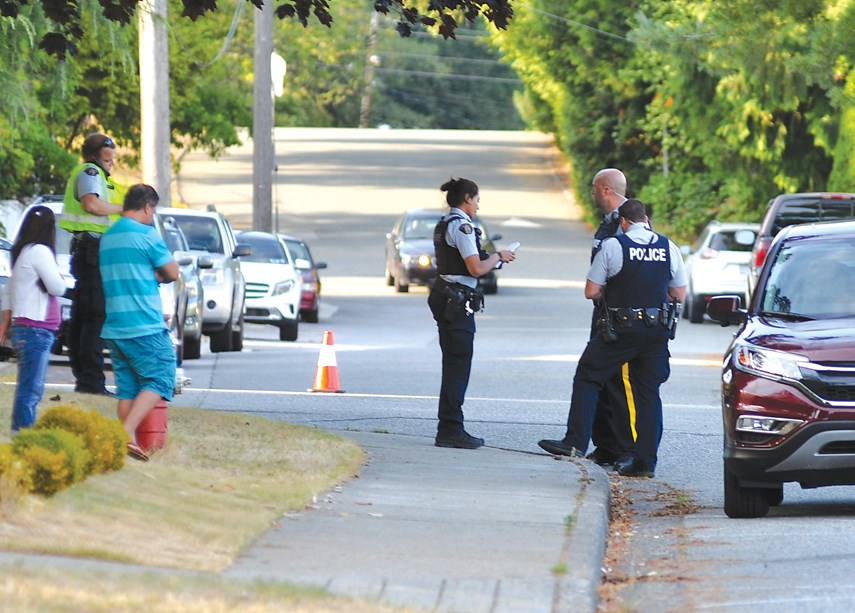 Note: This story has been updated to make a correction regarding the direction of the traffic line-up.

A North Vancouver cyclist is recovering from head injuries after being struck by a driver near Grand Boulevard during Wednesday’s evening rush hour.

Just after 5 p.m., police and paramedics were called to the intersection of 19th Street and West Grand Boulevard where the collision happened. Traffic was heavy at the time, with a lineup of vehicles lurching east toward Lynn Valley Road.

The driver of one vehicle had stopped short of West Boulevard to keep the intersection clear when he waved the driver of an oncoming red Honda SUV through, right into the path of the eastbound cyclist, according to Cpl. Richard De Jong, North Vancouver RCMP spokesman.

“The bike and the cyclist did a cartwheel over the hood of the car and the cyclist hit his head into the car,” he said. “It was serious for a while. It looked like he might have had a brain bleed but he was released last night from hospital with, fortunately, minor wounds.”

Investigators shut down the intersection for more than an hour. There were many witnesses to the crash and police have a lot of statements to pore over, De Jong said. It is the responsibility of drivers to yield to oncoming traffic when making a left turn, De Jong said, but a decision on charges could come in a week or more, he added.

The incident should serve as a warning to the people who practise the social courtesy of waving another driver through, even though they may not have the right of way. De Jong said.

“If you’re going to do that, be aware you could be signalling somebody into an area that is potentially unsafe or dangerous because of any other traffic, like a cyclist you don’t see or pedestrian,” he said. “You may not be aware of someone coming on in your blind side.”

The incident bears a number of similarities to another that happened on Monday, at the corner of Mount Seymour Parkway and Riverside Drive.

The driver received a $167 ticket for failing to yield on a left turn when a cyclist ran into the passenger side of his pickup truck. The cyclist received a concussion and lacerations, and experienced back pain.

In late July, Vancouver cyclist Lukas Drake was killed in a crash with a left-turning driver on East Keith Road. That collision remains under investigation.