With a funding boost from the B.C. government, Tsleil-Waututh Nation will build a six-storey affordable rental housing project for its members
Jun 7, 2021 12:55 PM By: Elisia Seeber, Local Journalism Initiative Reporter 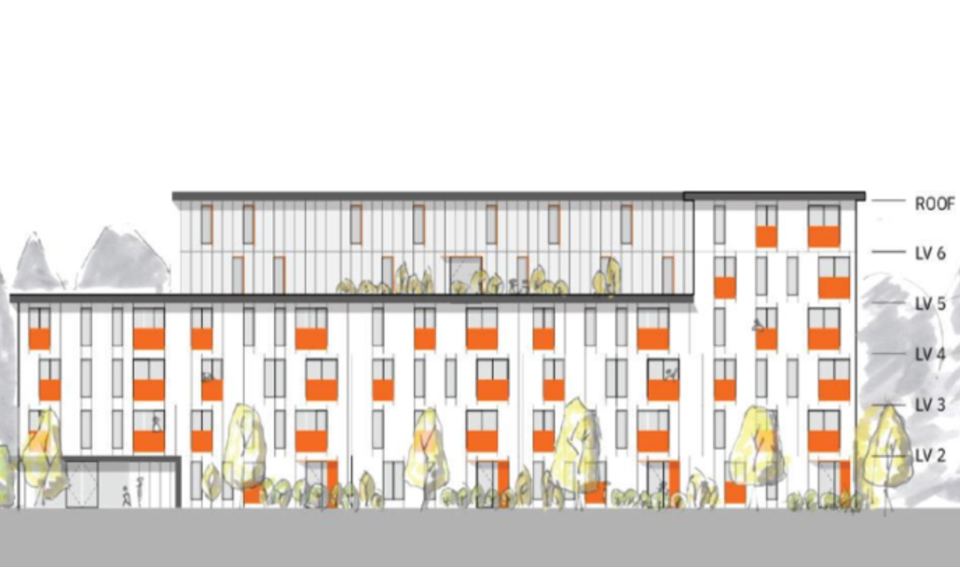 A six-storey affordable rental housing project will be built in Tsleil-Waututh’s Burrard Inlet reserve in the new community subdivision along Spa-ath Road in North Vancouver thanks to a funding boost from the B.C. government. Project rendering / Tsleil-Waututh Nation

Tsleil-Waututh Nation is set to build a 50-unit affordable rental building urgently needed for its community thanks to an injection of provincial government funding.

The six-storey housing project will be built in Tsleil-Waututh’s Burrard Inlet reserve in the new community subdivision along Spa-ath Road in North Vancouver.

“The project recently received support through BC Housing’s Community Housing Fund and will serve an urgent need for much-needed affordable rental housing for our community members,” Shannon Thomas, TWN housing and facilities manager, said in a release.

“By providing a mix of one to four-bedroom homes and rental rates, the project aims to support the diverse needs of the membership, with a focus on seniors, families, and keeping multi-generational households together.”

The building will offer communal areas for members including a multipurpose amenity space located on Level 1 with a kitchenette and washrooms attached and common laundry rooms on the main level or every other level. The facility will also have 19 parking stalls under the building, including four accessible stalls, 25 parking stalls at grade level on the south side of the building, and bike and mobility scooter parking.

Thomas said over the coming months, the Nation's housing department will be working with BC Housing on the project and it is anticipated that construction will start in late 2022. She said they will also be asking for community input on the project’s design and provide updates to members as the project comes to life.

Provided by the provincial government's Building BC: Community Housing Fund, the affordable rental homes are part of 47 new projects which will deliver more than 2,400 homes across B.C. for individuals, families, seniors, people with disabilities, and Indigenous peoples. More than 1,000 of the new homes will be for Indigenous peoples, families, and Elders, according to the province.

“Everyone deserves access to safe and comfortable housing that matches their budget,” Susie Chant, NDP MLA for North Vancouver-Seymour said in a release. "This partnership with the Tsleil-Waututh First Nation will bring 50 new affordable homes for Indigenous individuals, families, and Elders to the community."

The Community Housing Fund is part of the BC NDP government’s 10-year $7-billion housing plan. It’s an investment of $1.9 billion to build more than 14,000 affordable rental homes for moderate- and low-income families and individuals.

Three and a half years in, more than 8,600 of these homes are already open, under construction, or in development.

Cultural tour to share the deep connection Tsleil-Waututh have to Maplewood Flats
May 30, 2021 12:05 PM