Transit improvements, road upgrades, COVID-19 responses, and strategies to help businesses were discussed at a virtual State of the District address
Nov 30, 2020 3:24 PM By: Elisia Seeber 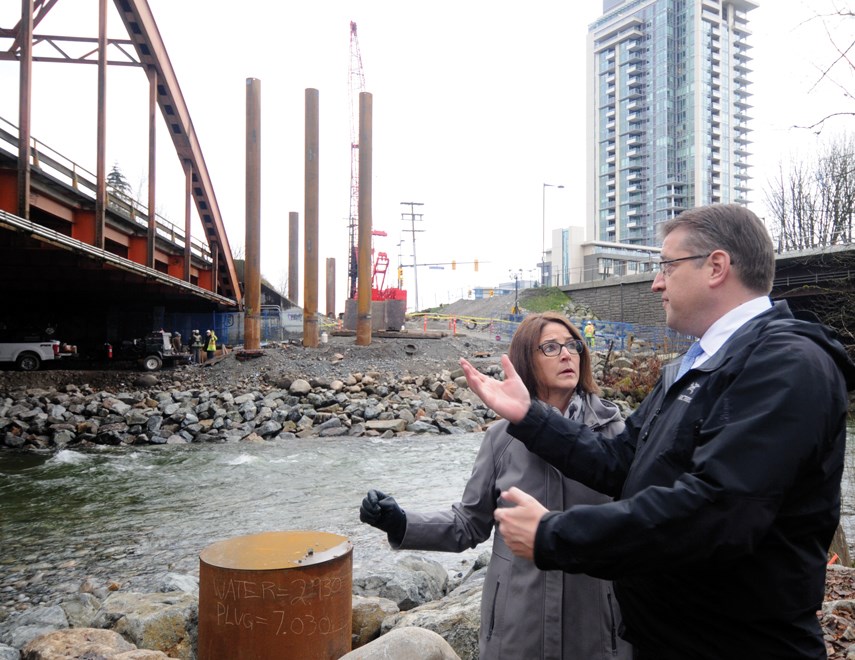 Transportation continues to be at the top of District of North Vancouver Mayor Mike Little’s list when it comes to making improvements to the North Shore.

Transit improvements, road upgrades, COVID-19 responses, and strategies to help businesses were the areas Little focused on in a virtual State of the District address, hosted by North Vancouver Chamber, on Nov. 25.

Little began his address by reminding those tuned in that it had been a very long time since there had been a major road infrastructure change to the North Shore, noting the last time there had been a lane increase was 1963 – when Lions Gate Bridge went from a two lane to a three-lane format.

He discussed at great length the $198-million investment to upgrade the Highway 1 Lower Lynn interchanges, which is now in its final phase, and includes major changes to the Mountain Highway-Lynn Creek, Keith Road-Seymour Parkway and Main Street-Dollarton interchanges. The entire project, which was first announced in 2014, should be complete by the end of next summer.

“We do have a significant investment underway with the Ironworkers Memorial [Second Narrows Crossing] project,” Little said.

“I think many people have seen in the last couple of weekends that some significant shifts are starting to be made in front of the Holiday Inn corridor.

“The eastbound on-ramp lane was just completed last week and has opened up. Next, you'll see the flyover piece that connects up in front of the Holiday Inn onto Fern Street … once that's done, then you will have a much more direct route east and west of Seymour.”

While the road upgrades will help ease congestion, manage traffic, reduce travel times and remove three of the district’s top crash locations, Little said more transit options were still needed to help people get to and from the North Shore.

He highlighted the work the three North Shore municipalities were doing to find transit solutions, making mention of securing $250,000 from the province for the Burrard Inlet Rapid Transit feasibility study, which has found several geo-technically feasible options for creating a fixed rapid link to the North Shore.

“We are progressing in the process. You have to turn a study into a plan, into a project, and we’re all working together and moving in the same direction on it,” he said.

Little also mentioned a $250,000 federal grant secured to study the economic impacts of congestion on the North Shore.

“These two studies I think are going to be our next best step for creating real transportation solutions,” he said.

Speaking of other transport initiatives, Little briefly mentioned the introduction of ride sharing being a success, getting a third SeaBus back up and running, the new RapidBus line, and an upcoming micro mobility and pilot e-bike share program, which the district has been working on with the other North Shore municipalities to get rolling.

Residents can also look forward to upgrades coming to Phibbs Exchange, in the near future, including more weather protection, lighting, services, and washrooms.

Little said when the pandemic struck, the need for transit solutions became even more apparent, when people began heading to the North Shore to enjoy parks and recreation facilities, causing traffic jams at 10 a.m. on a Saturday.

“We saw people go to our parks in droves,” he said. “Lynn Valley Headwaters Park tallied 80,000 people in two days.

“We had to work against some of the things people were doing to try to adapt, which nobody wanted to do, nobody wanted to shut down access to a public space, but we had to follow the best evidence we had from science, that the transmissions were going to be taking place in those kinds of places, and so we had to respond.”

When COVID-19 first hit, the district responded quickly to shut down its playground facilities and anywhere with shared infrastructure including Quarry Rock and Lynn Canyon Suspension Bridge, where transmission and congregation was also a concern.

“I have to say that some of the responses were a little bit haphazard,” Little said.

“People have been very gracious at letting us try ... and fail in some circumstances and succeed at others.”

Little said the COVID pandemic had “deeply impacted the community.”

“I’m deeply indebted to all the people who have had to change in order to be able to make services work during this time,” he said.

The district took several measures early on to try to support small businesses including a program to introduce new temporary outdoor business areas.

“If businesses were in good standing and had been operating their customer service area properly, then we did whatever we could to help them keep that space going.

“Our council met a few weeks back and did extend that opportunity into next year up to October of 2021.”

He said the district also looked at how they were allocating road space, using Deep Cove as an example of an area where they used traffic lanes to create greater outdoor space.

“Some of the lanes have changed and we've created some seating space and moved around the parking a little bit,” Little said, explaining it was a way to better manage congregation at a lot of very popular businesses that were finding it impossible to maintain social distancing.

Moving forward, Little said the district would “do what we can” to continue supporting small businesses.