'Artists from each of the host nations will work on a collaborative piece that will connect riders with the local Indigenous peoples.'
Jan 13, 2021 11:10 AM By: Elisia Seeber, Local Journalism Initiative Reporter 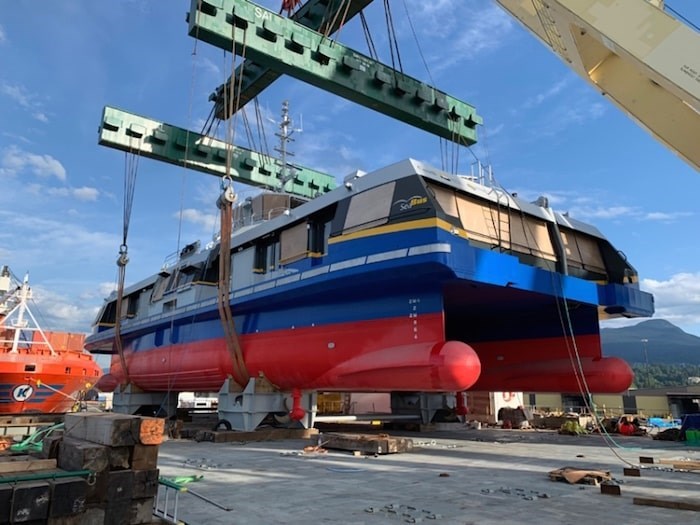 TransLink’s Burrard Chinook, as it looked on delivery from Damen Shipyards in 2019.TransLink

TransLink’s newest SeaBus, the Burrard Chinook, will be the first to have an Indigenous art installation on its exterior in the transit authority's fleet.

TransLink has partnered with Host Consulting Inc to commission three artists, one from each of the host nations, xʷməθkʷəy̓əm (Musqueam), Sḵwx̱wú7mesh (Squamish) and Səlilwətaɬ (Tsleil-Waututh) for the public art project, which aims to expand and strengthen their relationships with the host nation communities and create more visibility of MST peoples and their cultures.

The SeaBus was christened the Burrard Chinook in honour of the “largest and most iconic of the Pacific salmon species.”

“The Chinook salmon has played a central role in life on the west coast of British Columbia for generations,” a TransLink release from the debut of the SeaBus in March 2019 stated.

“It is also a renowned swimmer and a critical part of the ecosystem in the Burrard Inlet and the northern Pacific Ocean.”

The final selected artists will create their own Chinook salmon design and then work collaboratively to make one cohesive artwork that reflects the vessel’s name. The entire SeaBus will then be wrapped in the design, with a few exceptions, including the roof, windows, life rafts, muster station signage, vessel name and side vents. TransLink expects to display the artwork for up to five years.

“TransLink aims to both reflect and acknowledge the rich Indigenous culture of Indigenous peoples within our service area,” said Dan Mountain, spokesperson for TransLink.

“Through our public art program, we have incorporated art from Indigenous artists into stations and exchanges in the past; however, this is a unique and exciting initiative where artists from each of the host nations will work on a collaborative piece that will connect riders with the local Indigenous peoples.”

He said one example of Indigenous art at a SkyTrain Station was the artwork at Coquitlam Central Station, including a canoe contributed by Kwikwetlem First Nation and graphics on the platform level glazing by Coast Salish artist Maynard Johnny Jr.

“This art was selected in partnership with the provincial government during the Evergreen SkyTrain expansion,” said Mountain.

The call for artists closes on Jan. 15 and will be followed by a selection process to choose the artists. The selection panel will include representatives from TransLink and each of the three nations.