This week 50 years ago: Muhammad Ali trained at a North Vancouver boxing club

A Carson Graham alumnus was there to photograph the boxing great as he prepared for a fight with a Canadian champion.

It’s not hard to imagine the emotions running through a shy, high school photographer as he stood within swinging distance of the greatest boxer to ever step inside the ring.

In the last week of April 1972, the North West Eagles Boxing Club at West Fourth Street and Chesterfield Avenue was the training centre for Muhammad Ali and his opponent, Canadian heavyweight champion George Chuvalo.

The two fighters were set to square off in a May 1 bout at the Pacific Coliseum.

The North Vancouver gym was owned by the late Elio Ius, national boxing coach at the time. His son, John Ius, was the young photographer.

“I was a bit in awe,” said John Ius, who rediscovered the 50-year-old images just a few weeks ago. He recalled Ali putting on a bit of a show, chirping Chuvalo in a style similar to professional wrestlers today.

“There was one [time] where he chased George Chuvalo around … and called him a washerwoman,” Ius said.

His brother Andrew, nine years old at the time, told Ali he wanted to be a professional boxer. Ali replied that his brother would have to fight him, then the boxer proclaimed his famous moniker: “I am the greatest.”

Part of what makes the boxing legend’s visit so memorable, to Ius and his friends and family who remember it, is that such an event wouldn’t happen today, with everything under tight security.

“You’d never be able to duplicate something like this today,” Ius explained. “It would never happen because it seemed so casual.”

Ali would go on to beat Chuvalo by decision in a 12-round bout. The Canadian took a pounding but never went down.

When Ius found his collection of photos from the week, he digitally scanned them then made a slideshow that he sent around to a lot of his contacts. Ius said the responses he got were full of excitement, and he got email after email in return.

He put the slideshow on the grad page for Carson Graham, where he graduated in 1972.

“Because people do talk about it quite a bit still. They say, ‘I was there.’” 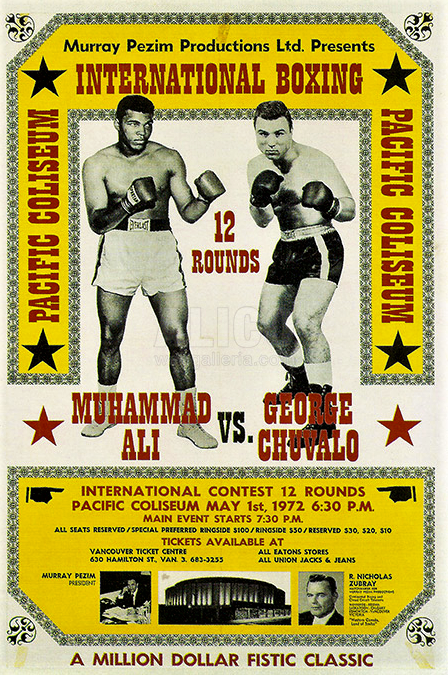