The developer that was ready to chop down a cedar tree, estimated to be 205 years old by residents, is now doing everything it can to preserve it. 🌲
Apr 4, 2021 3:35 PM By: Elisia Seeber 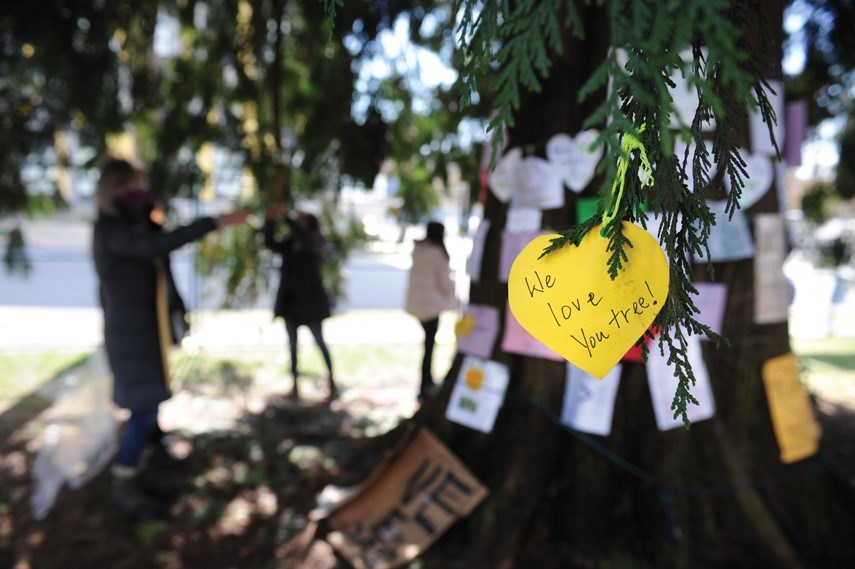 Darwin Properties is looking at all options to save the cedar tree, on the corner of 21st Street and Eastern Avenue in Central Lonsdale, in the way of one of its developments. Mike Wakefield, North Shore News

Hope is growing among the North Vancouver community that a beloved cedar tree, which was destined to be cut down to make way for a new development, might just stick around for generations to come.

The tree, on the corner of 21st Street and Eastern Avenue in Central Lonsdale, was slated to be cut down mid-March  to make way for the redevelopment of the Harry Jerome Neighbourhood Lands. But the developer, Darwin Properties, has now held off having the tree felled “in response to community concerns.”

On April 1, Darwin reaffirmed it was continuing to work with the City of North Vancouver “to identify all possible solutions to preserve the existing cedar tree on the corner of the property,” having first announced it was exploring its options on March 22.

“As part of the work to investigate the viability of saving the tree, an arborist will be onsite on April 6 to 10 to conduct a root investigation, which includes trenching around the tree, exposing the root system and delineating the location of the roots,” Oliver Webbe, president of Darwin Properties, said in a statement, adding it wouldn’t impact the health of the tree.

Once the root investigation is complete it will be provided to the project architect and engineer to determine if a redesign of the southeast corner of the building planned for the area is a possible solution to preserve the cedar tree, according to Webbe.

But in an email to a concerned resident, he also wrote that Darwin had "already started redesigning the building with the expectation that the tree roots are healthy and we can change our plans to keep the tree," giving extra hope to the community.

Residents rally to save cedar tree

The city announced in December 2020 they had signed a 99-year lease and issued development permits for Darwin and Sunrise Senior Living to begin work on the first residential building and assisted living facility in the multi-phase project at the site. Darwin will build two six-storey midrises where the decommissioned North Vancouver Lawn Bowling Club now sits. The lease will put $50 million in the bank for the eventual rebuild of the Harry Jerome Community Recreation Centre.

When nearby residents found out the cedar tree was destined to be destroyed due to the redevelopment, they quickly came together, organizing petitions and protests in a last-minute bid to save their much-loved community conifer.

Since March 15, the newly formed Save Our Cedar group has collected more than 20,000 signatures in support of saving the tree that residents estimate to be 205 years old, based on its circumference.

The Save Our Cedar petition has been signed by 20,000 people! This is an amazing and clear message from the community - @DarwinConstr keep this cedar in the ground. Let's keep signing and sharing: https://t.co/V0ScEN172m pic.twitter.com/5MXrrXOrr9

When concern was first raised, Andrew McMillan, Darwin Properties development manager, originally said "it was clear a number of factors would not allow for its preservation, most significantly its location, which is in conflict with a new pedestrian access, below-grade structure, building envelope, and incoming services off Eastern Avenue."

The community’s efforts to be “the voice of the tree” have certainly paid off since then.

Kathryn Swift, a nearby resident and member of the Save Our Cedar group, said it was very encouraging to hear Darwin was doing everything it could to change its plans and preserve the tree.

“The uncertainty is challenging for us all and we remain cautiously optimistic that they will be able to save and include this healthy, magnificent cedar in their plans for the development,” she said.

Webbe also stated that the arborists' work next week will require clear and safe access to the site and will limit access to the Green Necklace pathway at the corner of Eastern Avenue and 21st Street.

“We appreciate your patience and continue to listen to the community’s concerns as we work toward a solution to this difficult issue,” he said.

“We will provide updates as soon as they are possible."

For the moment, Swift said the group would continue to “come together, young and old, to celebrate and honour the tree.”