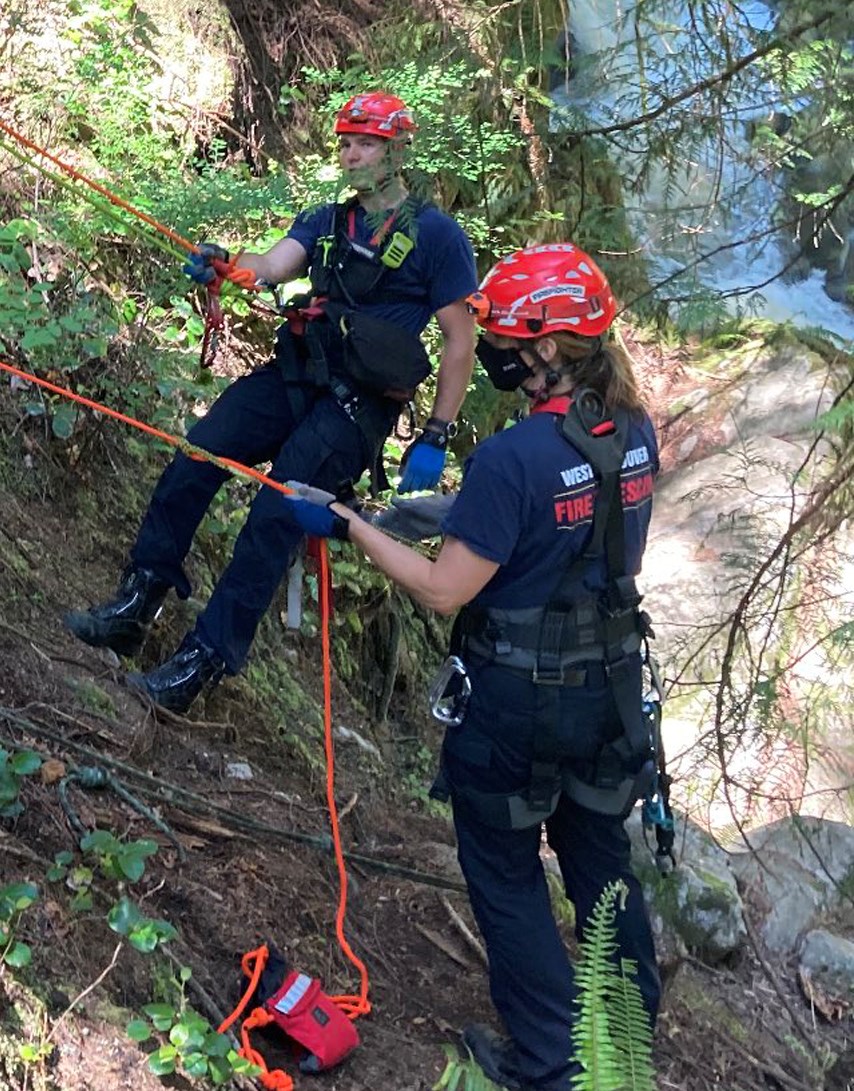 Members of West Vancouver Fire and Rescue make their way down to a hypothermic patient on Cypress Creek, June 2, 2021.https://twitter.com/WestVanFireDept

After two rescues from the same pool on Cypress Creek just 24 hours apart, West Vancouver Fire and Rescue is warning the public to be extra cautious.

On Tuesday afternoon, a woman in her 20s had a mishap at her usual swimming hole when she was swept over a small set of falls and into the pool above Cypress Falls.

“She could not extricate herself. The banks were too steep, and she was getting too cold, and it was too slippery,” Calder said. “She shoved herself into a little crevice, and was holding on for dear life in the water.”

Had she been taken by the eddy, she likely would have been dragged over Cypress Falls – the same waterfall where a large Newfoundland dog died in April.

If it wasn’t for 15-year-old Zachary Elfen and his friends, things could have been much worse, Calder said.

Elfen was showing his friends a favourite cliff jumping spot when they saw the woman in the water.

Elfen clambered down to the cliff edge and reached out for the woman, but she was just out of reach. It took three tries before he could get a good grip on her. Elfen called one of his friends down to help pull the woman from the water while another friend called 911.

“The current was really strong that day because of the water coming down from the top of the mountain,” he said. “Definitely something bad would have happened if we weren’t there.”

The woman was clearly in shock but not injured, Elfen said, and she was incredibly thankful.

Soon after, crews arrived to check over the hypothermic woman and warm her up.

“There’s no doubt that they saved her life,” Calder said.

Elfen said he did not have any worries about his own safety through the ordeal.

Twenty-four hours later, crews were back at the exact same spot after another woman in her 20s slipped from the edge of the trail down to the water below.

In that case, two West Vancouver parks staff members saw her and pulled her out.

“They were putting themselves in danger as well,” Calder said. “It took our crews with rope rescue equipment to bring her back up.”

The weather is heating up and people are looking for places to cool off, but both incidents underscore the inherent danger that comes with any rushing body of water, Calder said.

“Without the fortunate intervention of others, these events could have had tragic outcomes,” Calder said. “Please use caution when venturing into our nature areas. Trail edges maybe unstable and steep. The water may be colder, deeper and swifter than anticipated, with unstable footing. Lynn Valley is not the only dangerous canyon on the North Shore.”